My bookwormish tendencies have come out with a vengeance.  My new HP Stream 7 makes reading ebooks so much easier and I decided to get a subscription to Scribd.  I like their interface a lot better than Oyster.  It's also a dollar cheaper per month and has audiobooks.  I have not tried the audiobooks yet.  If you want to try it, I can get you a 2 month trial if I refer you (which you can get through me instead of the one month trial you would get by just signing up - don't worry, you can cancel it at any time if you don't like it).

The tablet as has also allowed me to read books from my library on Overdrive.

Here are my reads for February:

A book with more than 500 pages - Insurgent by Veronica Roth

I enjoyed Divergent, so I read the sequels.  I read Allegiant as well but I couldn't find a category for it.  All three of them are long but quickly paced so I read them fast.

A book with nonhuman characters - Dragon Kiss by E.D. Baker

I have the first six books in the Tales of the Frog Princess but only finally got around to finishing the series on Scribd.  The main character in this installment is a dragon.  I also read A Prince Among Frogs which completes the series.

A book by a female author - Dear Mr. Henshaw by Beverly Cleary

I had never read this book before because the cover looked boring but I enjoyed the book,  I have read many of Cleary's other books as a child and loved them.

I'm not a bit Paulsen fan because I hated Hatchet but this has a Newbery honor and it was on Overdrive so I read it even though I was going to wait to get a copy from the library.  It wasn't horrible.

A book that scares you - Dolly Bones  by Holly Black

I didn't want to read this book because it sounded so creepy but it wasn't as bad as I thought.

A book with a love triangle - Unsouled by Neil Shusterman

This is the third book following Unwind.  There is a love triangle between Conner, Risa and Cam.  Cam is the "rewound" person made from carefully selected unwind parts.

A book set in the future - Legacy Code  by Autumn Kalquist

I got this for free off Kindle.  It's a novella about the human race escaping earth and looking for a new planet.  I also read the sequel, Paragon.

This book was heavily favored to win the Newbery this year but it had to settle for an Honor instead.  It is Woodson telling the story of her childhood in poetry.

A book that made you cry - The Crossover by Kwame Alexander

This book won the Newbery medal this year but I wasn't thrilled when I found out it was about basketball.  Instead, I ended up loving it and it made me cry at the end.

I actually read the whole "Dark is Rising" sequence (Over Sea Under Stone, Greenwitch, The Grey King  and Silver on the Tree) but this is the second book.  It is set around Christmas when Will turns 12 and discovers his destiny (dun dun duh!).

Other books: The Thief  by Megan Whalen Turner and The Moorchild by Eloise Jarvis McGraw which are both 1997 Newbery Honor books. A Gathering of Days by Joan W. Blos is a Newbery Medal winner.
Posted by Joy at 11:15 PM 2 comments:

I've been working steadily on my Sunflower Sampler the past few days.  I am happy to report that I finished all the Symerna Crosses in the middle of the center Sunflower.  I also did all the greenery on the left side.  The right sunflower is about half done or so.  I think next I will look at finishing the border before getting back to the unfinished flowers. 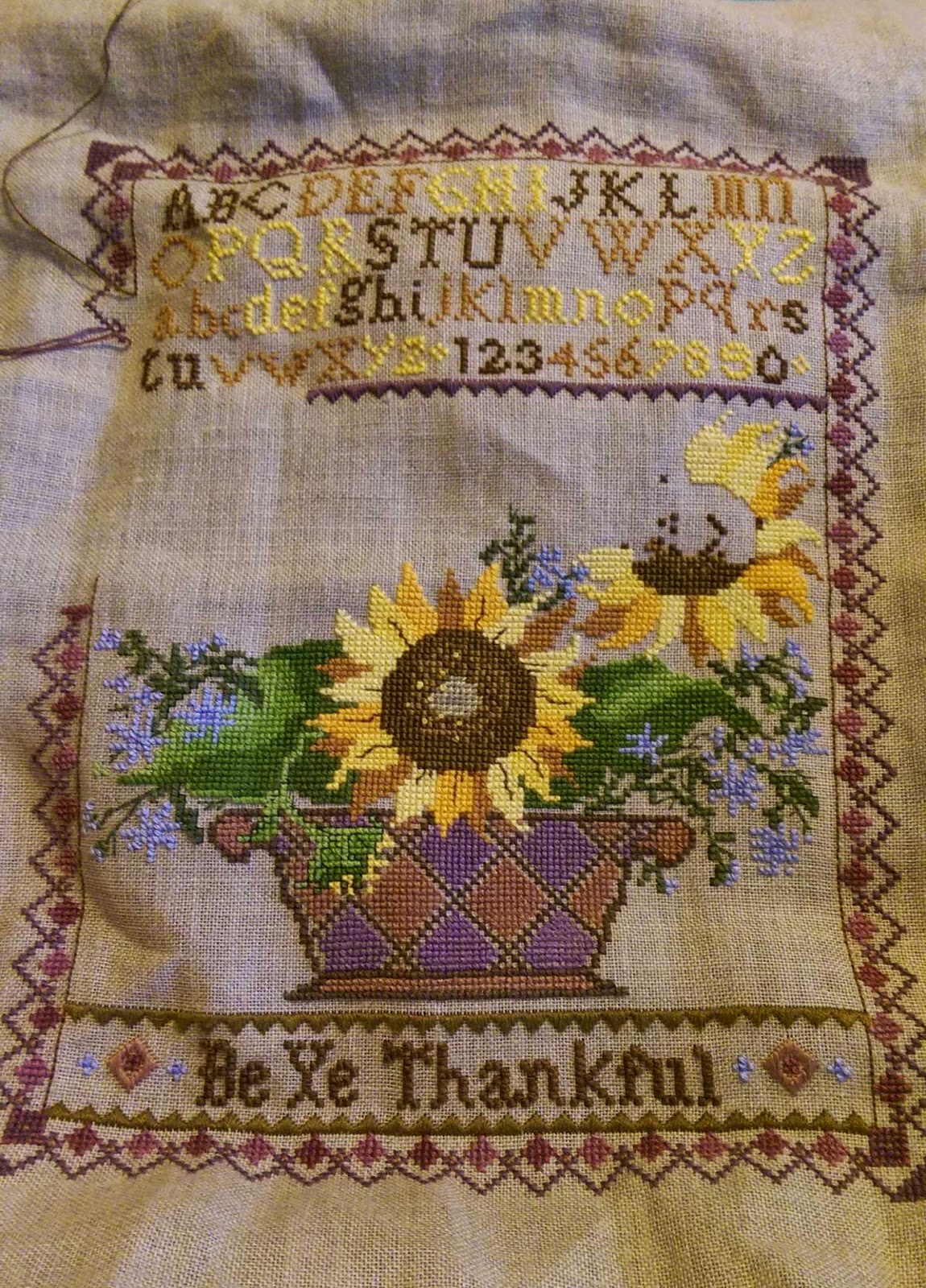 I also got a little bit of work on my new ornament. 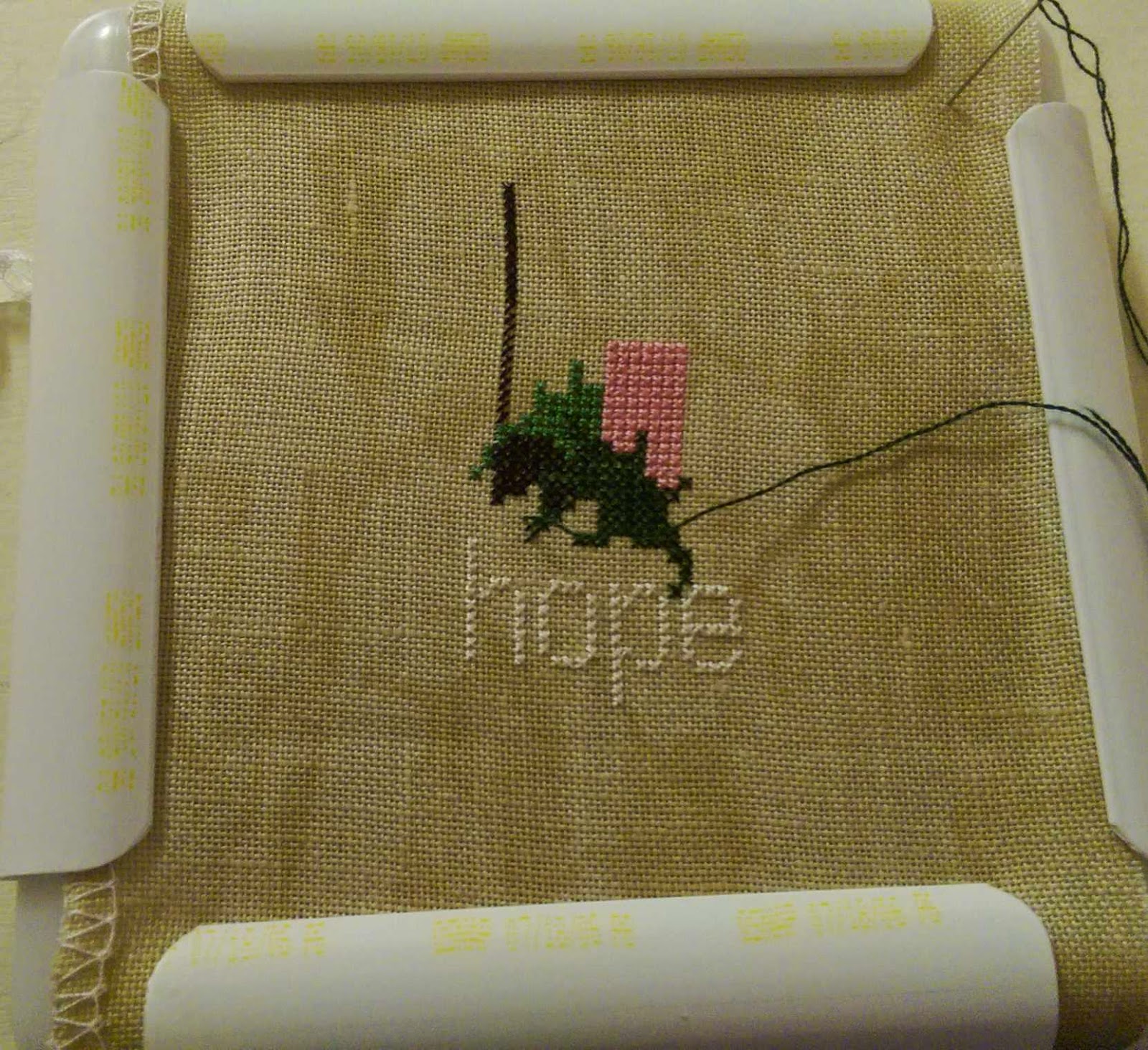 Friday was my wedding anniversary.  We celebrated on Saturday with a visit to the LNS.  My husband bought me a bunch of stash.  He got me the Soie d'Algier silk for the ornament I wanted to stitch and the Sampler Threads I needed for Octopus's Garden.  I also picked up a piece of clearance fabric that looked interesting.  Since it was a gift, I don't have to count it in my budget. 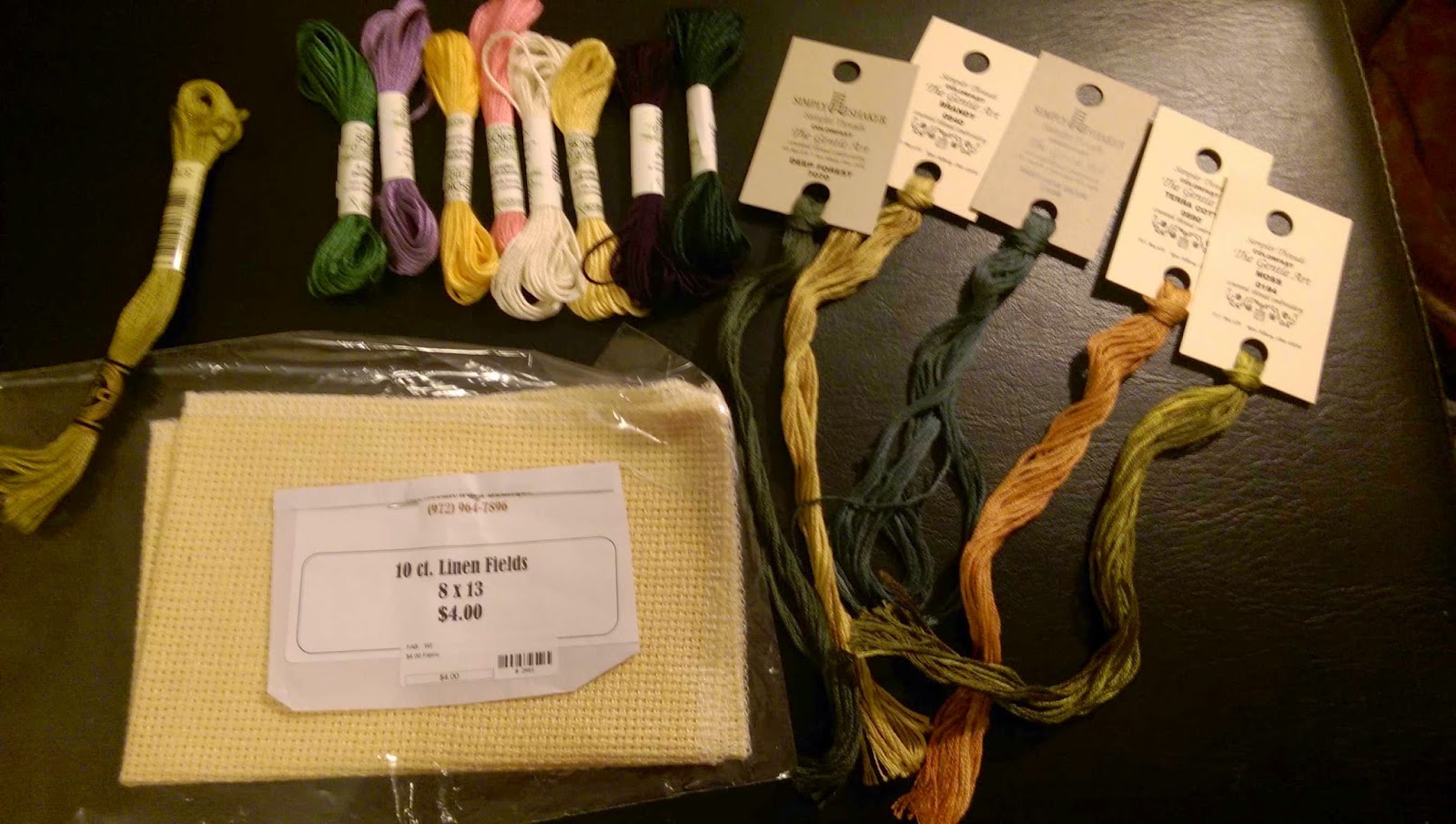 I started on "Lights of Advent" which was the ornament I was contemplating buying the Soie d'Algier for.  I discovered that the substitute DMC colors weren't even close to the colors of the silk so I'm glad I bought it.  The pattern calls for 35 ct. natural linen but the lady at the LNS said going with a 32 ct wouldn't change the size much.  So, I looked in my stash and found a scrap of 32 ct. Vintage Country Mocha Belfast linen 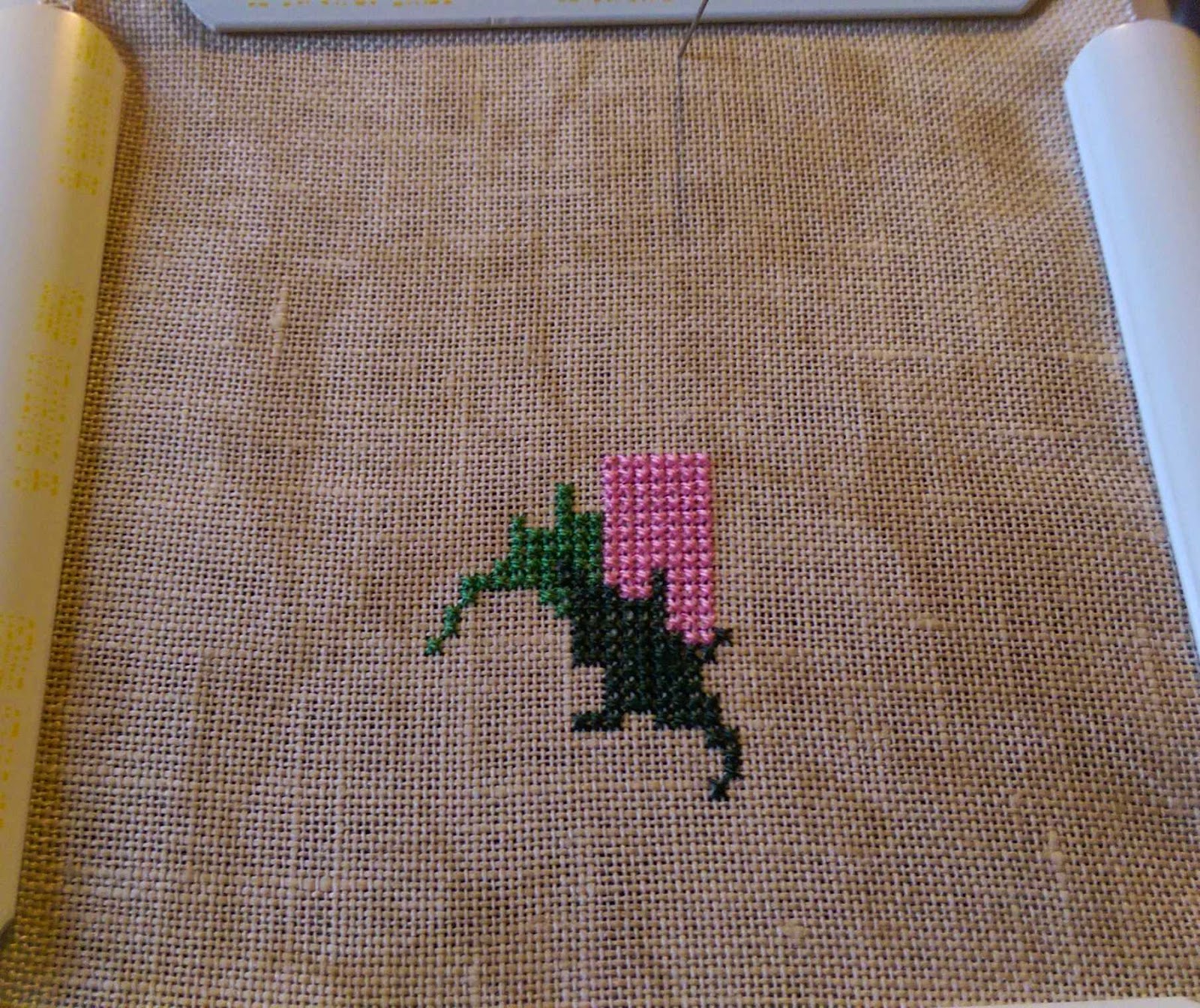 This month was a bit hairy.  I had to make sure to finish some items in order to keep from going over budget.  I am liking that new feature in this version of SfS.

I started and finished two ornaments that were in my stash.  Both are for Zoé's ornament box.

Mel encouraged us to visit other blogs after the January update, so I did.... AND IT MADE ME BUY MORE STASH!!!!  I saw the Blackbirds Designs Beatles series so the majority of my budget this month went toward that.

What stitching subscriptions do you currently have and love?

Right now, the only subscription I have is to Just Cross Stitch.  I'm in my second year of having a subscription and I bought the DVD that came out a year ago to get all the issues from 2001-2010.  I like the patterns in the magazine because they aren't terribly country or primitive.

Visit all the blogs in this round of the Stitching the Night Away Stitching Blogger Blog Hop:
Find the instructions on how to participate in this round by clicking here.
Posted by Joy at 3:55 PM 2 comments:

Today, I decided to make some headway on Fuji and finished off a page I had started last month.  I only did the gray part of the bird and not the branch on the bottom so the branch was what I did today. 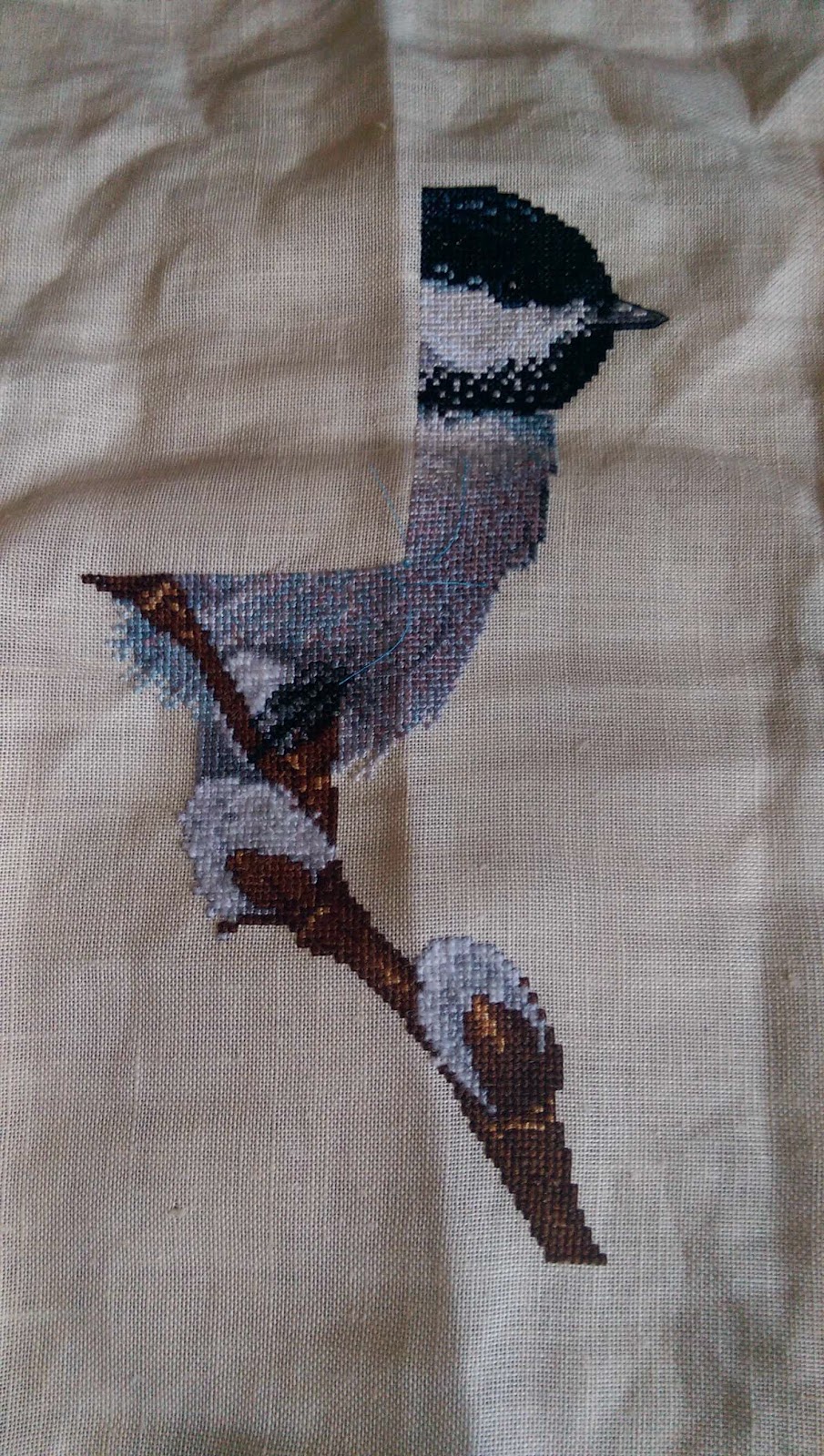 There are two pages left.  One is the top left of the bird and the other is a continuation of the branch.  This bird is not tiny.  He's currently about the size of my foot.

I also got a bit more of the yellow done on the Yellow Submarine. 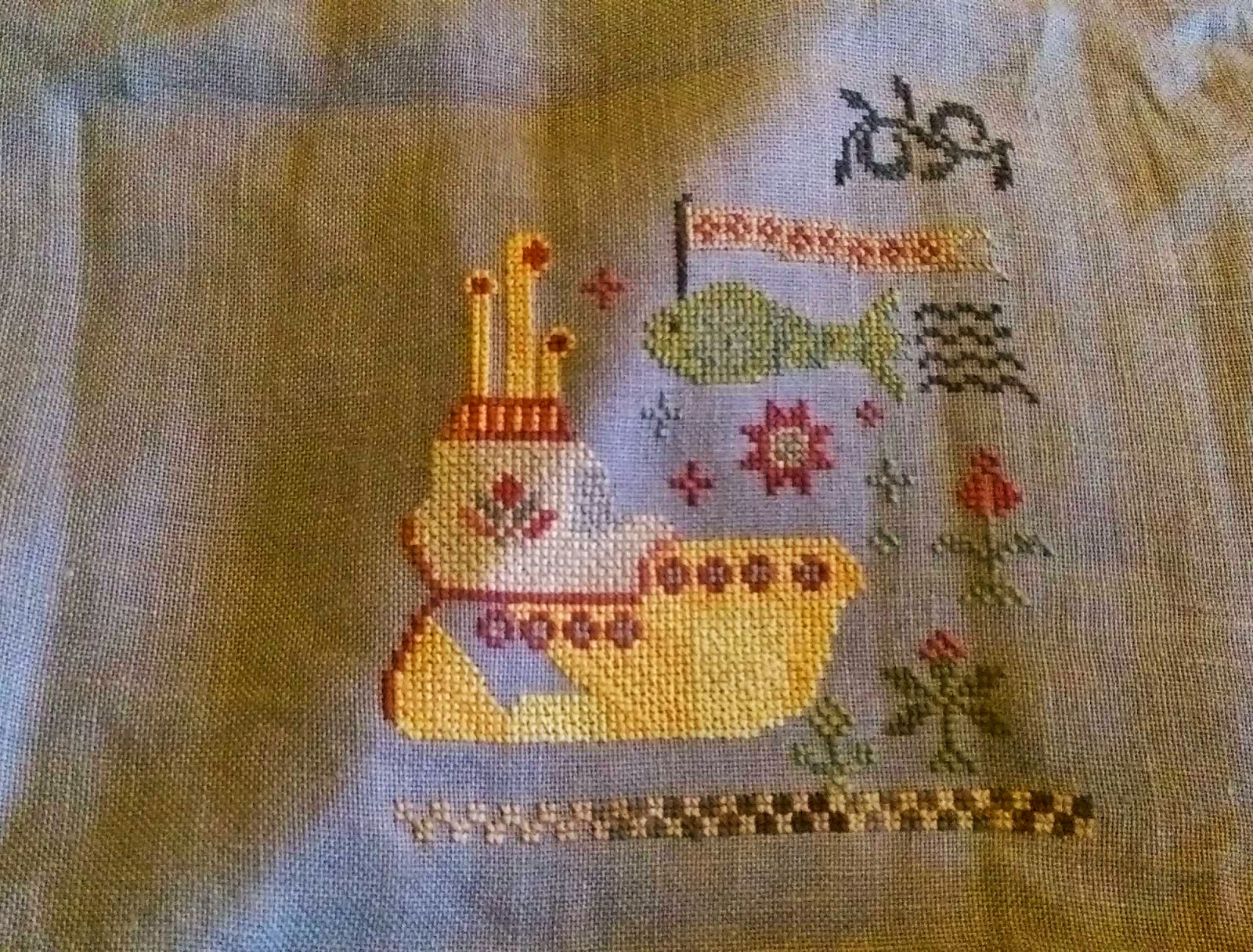 I decided to pull out Country Grace yesterday.  I got the squirrel mostly stitched and somehow, I am missing a color of DMC.  I go out and buy every color I don't have and I'm still missing one!  Grrrr..... 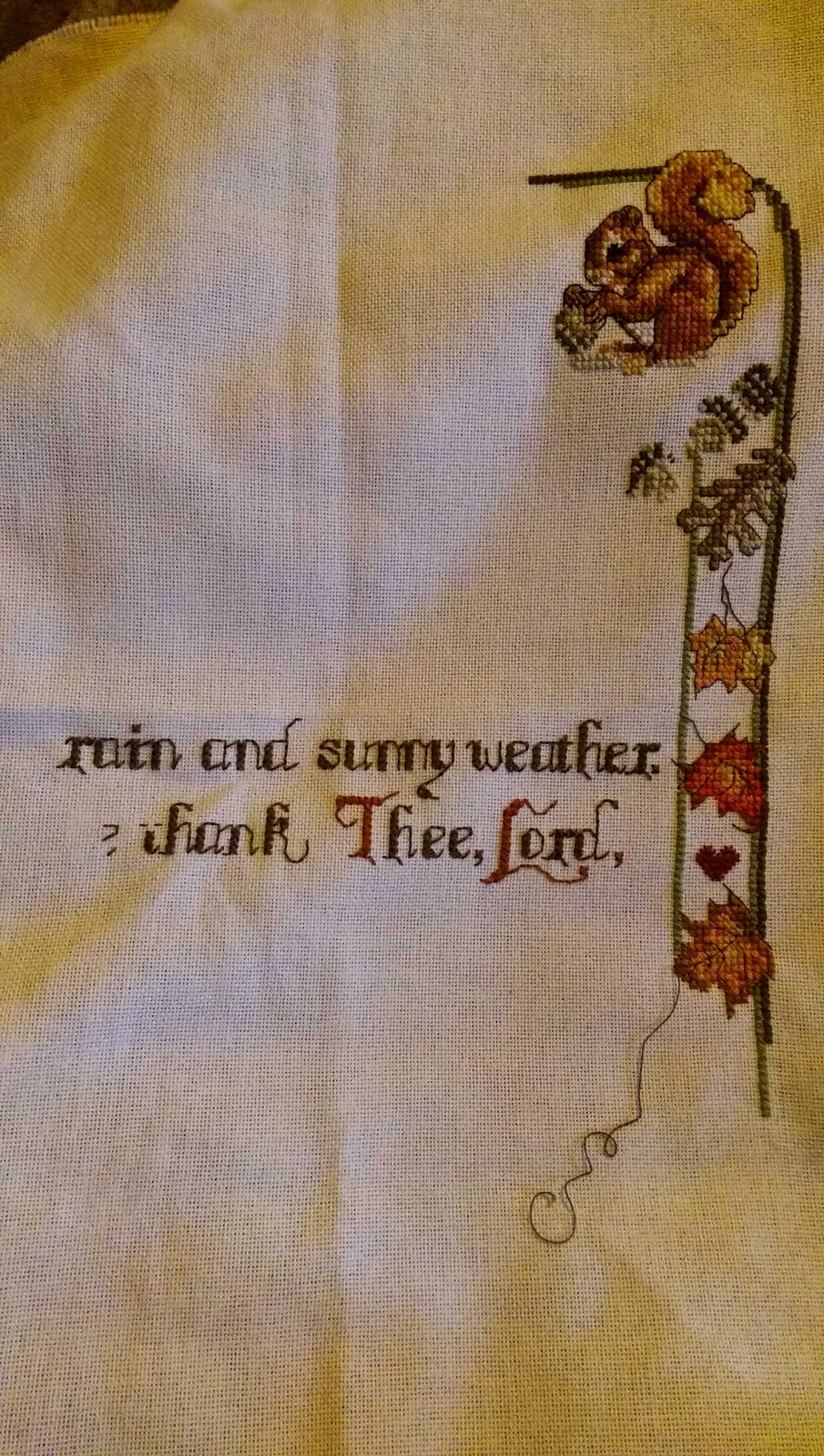 I finished the alphabet and top border on my Sunflower sampler.  Hoping the border meets up. 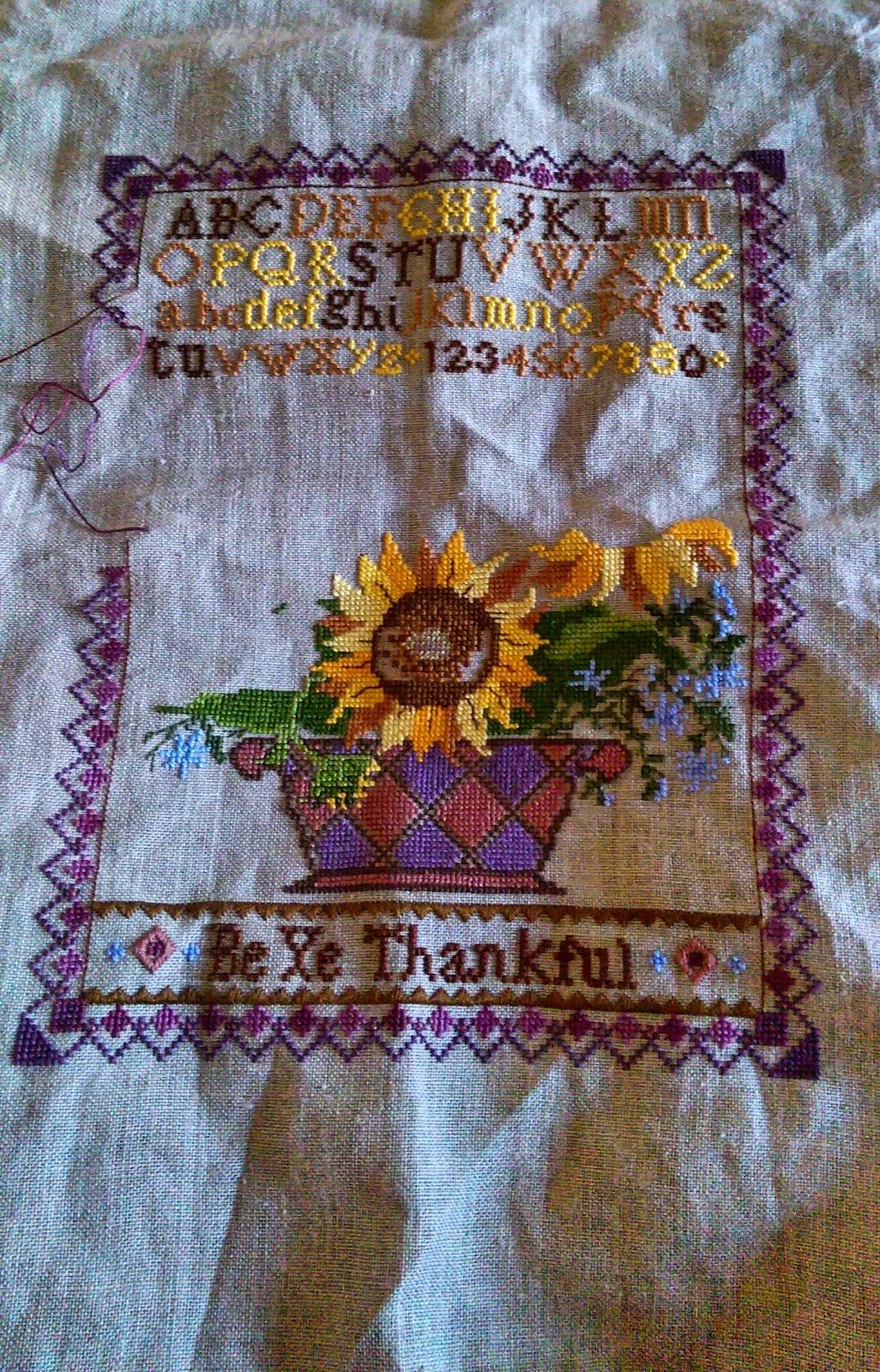 I finished Zoé's 2014 Ornament.  I have not personalized it yet because I have not decided on final finishing yet.

A Tablet and a start from stash

The Kindle Fire 6 went on sale last week so I had thought about buying one.  My husband told me to look at Windows tablets and for the same price, I decided on an HP Stream 7 instead.  It is great for an eReader because of its size.  The keyboard is hard to use some times but I have my laptop for heavy duty typing.  I can do so much more on it than I could with an iPad or Kindle or Android Tablet because it's like having a computer. 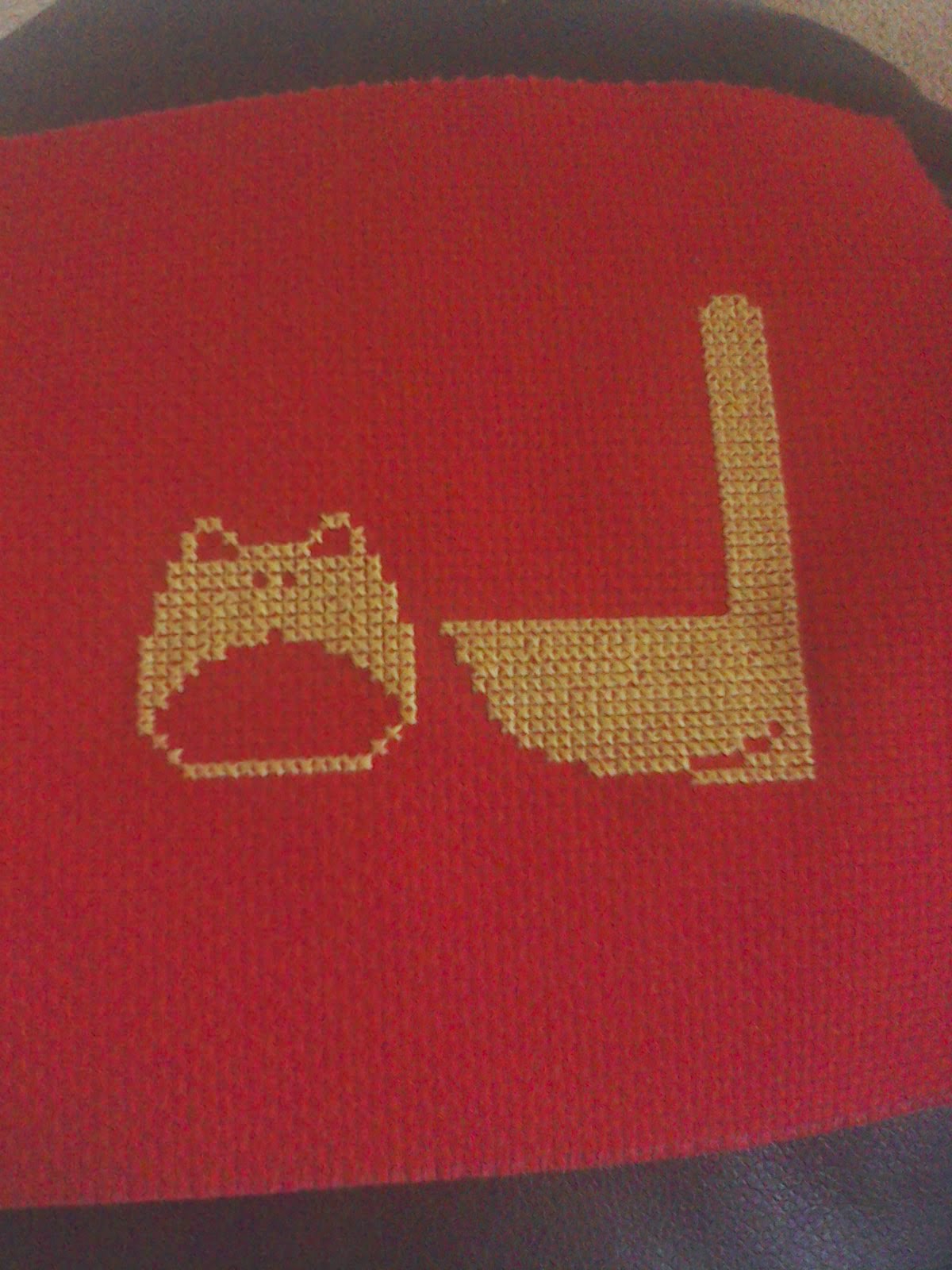 SCRAP, the lovely thrift store for craft items recently moved to a new location and they had their "grand opening" last night.  I spent more than I should have but I got some great stuff. 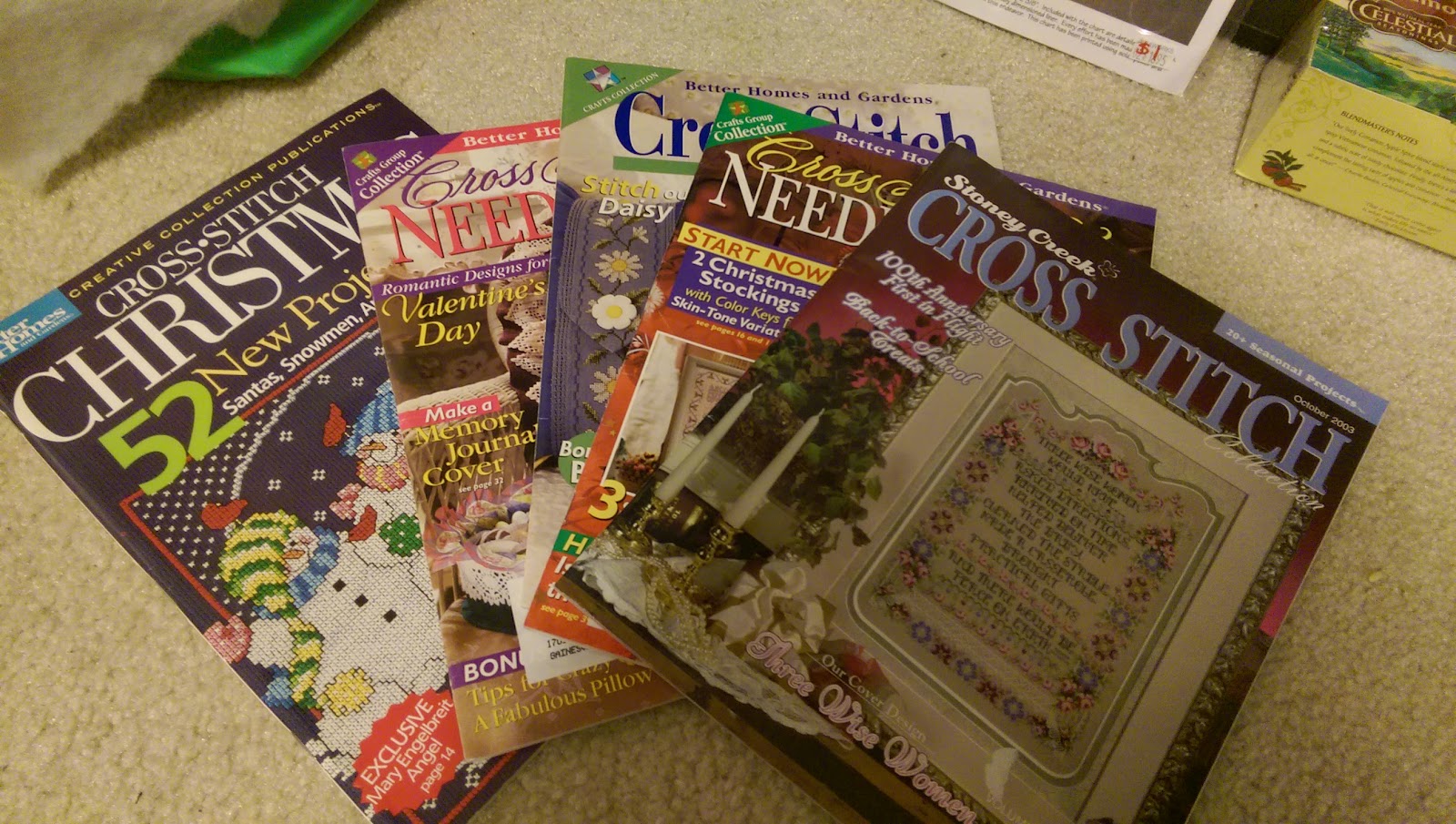 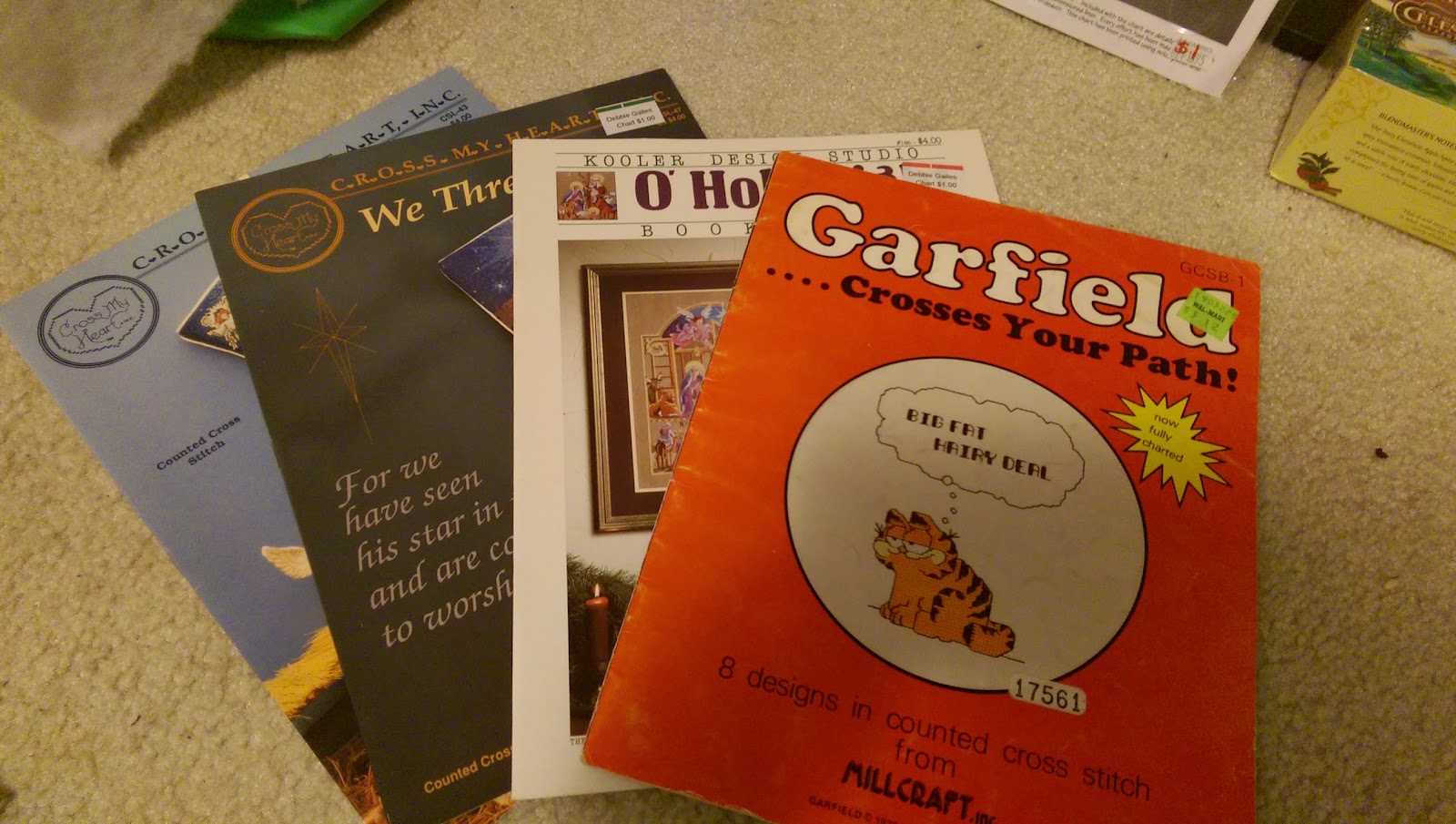 This haul puts me slightly over budget but I just have to stitch and finish a few things to get back on track.
Posted by Joy at 2:54 PM 3 comments:

I put in a bunch of effort and finished up Tigger early this morning.  I added the personalization on the top. 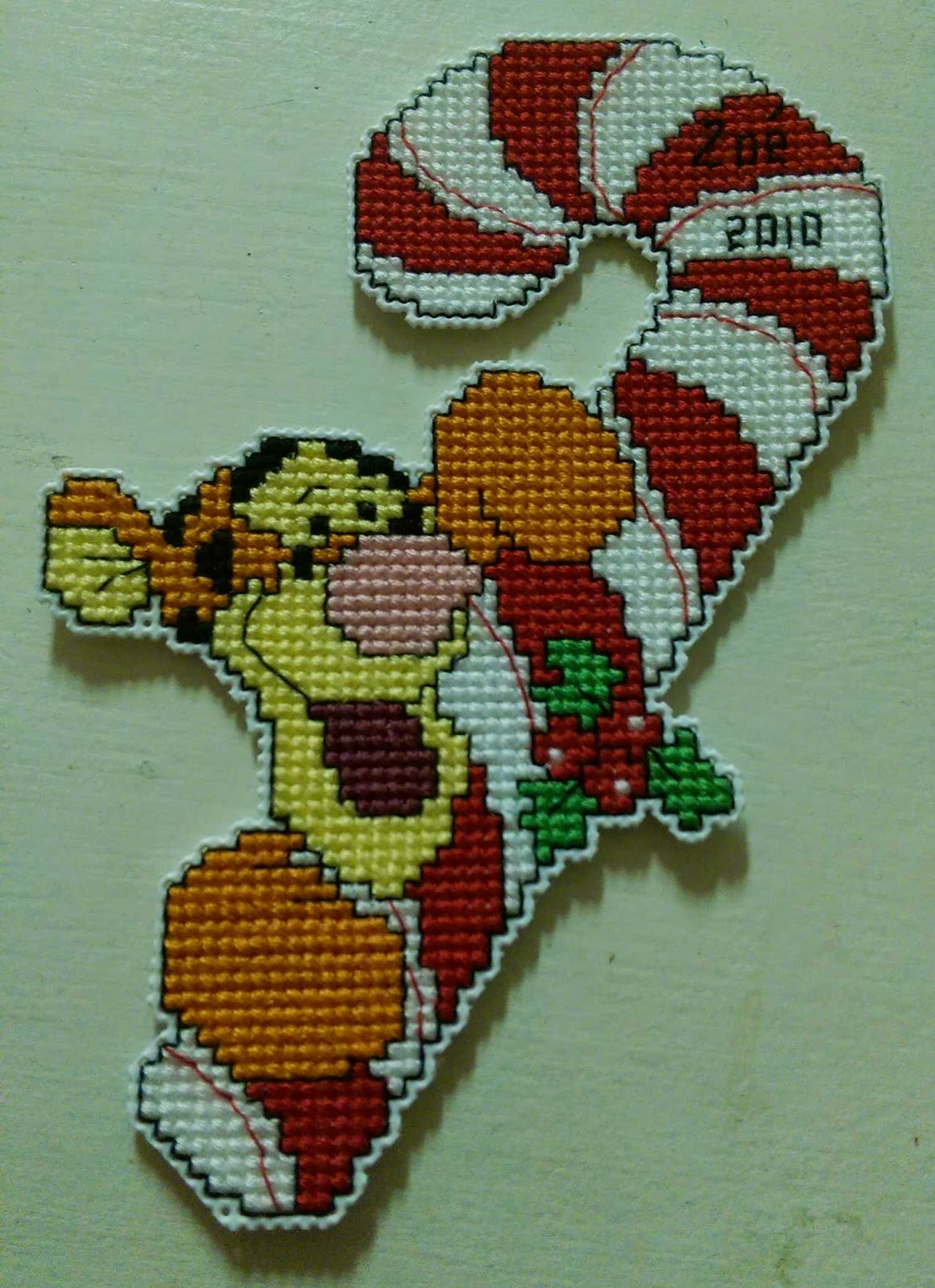 Zoé was very excited about it this morning when she saw it and recognized her name.  Only two more ornaments to go before she's caught up until next Christmas.

The kit calls for three strands of floss so I used a size 24 needle to do the cross stitches.  When I went to do the backstitching, I had issues getting the needle through all that floss (especially since perforated plastic is unyielding.  I switched to a 26 needle which was easy to thread with only one strand of floss and it glided through the backstitching beautifully.  Just a tip. ;)
Posted by Joy at 11:53 AM 2 comments:

I can see the light at the end of the tunnel on my Tigger Ornament.  Here's a look. 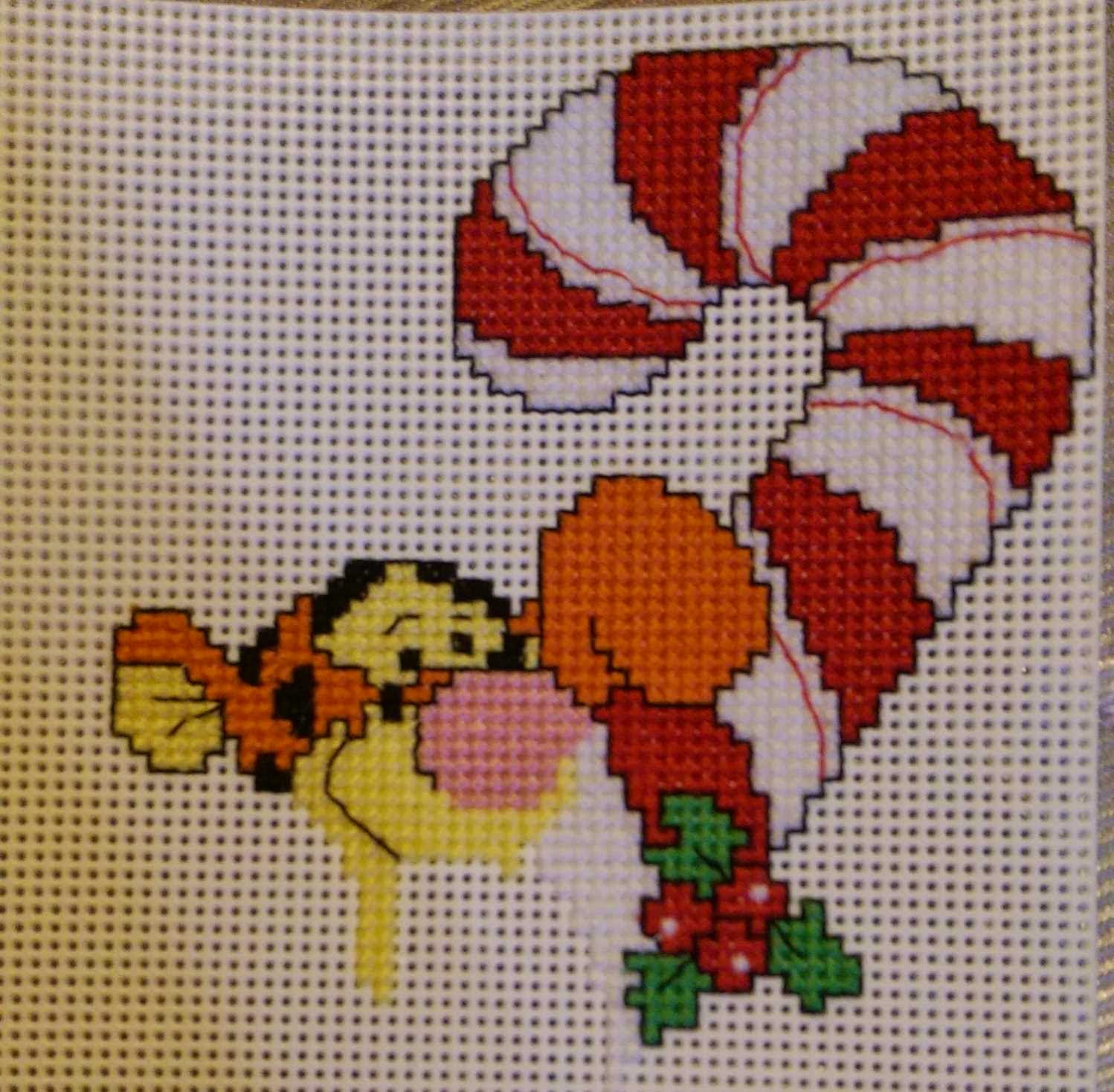 I also got a little bit more done on Yellow Submarine 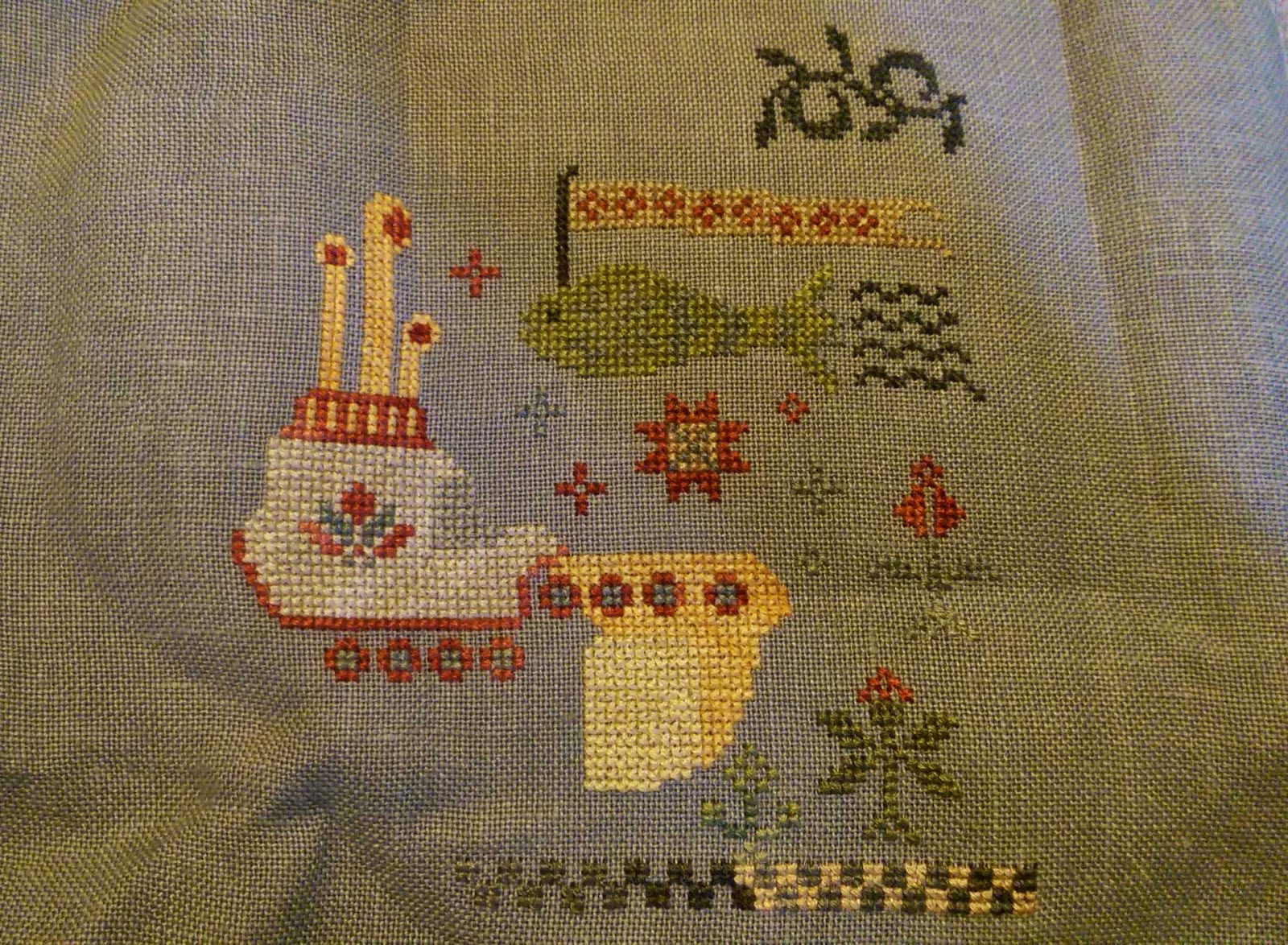 A Welcome and a bit about Birds

First of all, welcome to all my new followers who have joined me through Grow Your Blog.  It's so great to share experiences with you!

One of my visitors commented that she loves Chickadees (in reference to the Chickadee that I am stitching).  I am also a fan of Chickadees and birds in general.

I can trace my love of birds to my grandmother who was a bird fanatic.  She also did counted cross stitch and most of her stitching involved birds.  Her favorite bird was the hummingbird.

I grew up in Wisconsin (which for my international followers is in the upper Midwest portion of the U.S. and gets lots of snow in the winter) so I saw birds all the time.  Growing up, we had a nice grassy backyard with a large Silver Maple, several Blue Spruce trees and a birdbath so we attracted a lot of birds.

The state bird of Wisconsin is the American Robin.  They were everywhere.  After a rainstorm, the air was full of their song.

Here are some other birds I used to enjoy.

Now that I live in Texas, surrounded by prairie grasses and cows, I don't see a lot of these birds anymore.  I see a lot of Mockingbirds (the state bird) and Scissor-tailed Flycatchers and the occasional Roadrunner.  I do miss my Wisconsin birds though.
Posted by Joy at 12:27 PM No comments: