I FINALLY finished this book. I've only been working on it since early this fall. Haven't had much time to read. The Looking Glass Wars is a retelling of Alice in Wonderland from the perspective that Alice is a refugee from Wonderland who told her tale to Lewis Carroll who published it in a book.

Alyss Heart is the princess of Wonderland until her evil Aunt Redd slaughters her parents and Alyss is forced to flee to the "real world." She is adopted by the Liddells, forgets her previous life and is about to marry a Prince when suddenly she is taken back to Wonderland in an attempt to overthrow Redd.

There are some great re imaginings of characters with the Mad Hatter who is actually the bodyguard (his hat is a deadly weapon) and Bibwitt Harte who is the real White Rabbit and Alyss' tutor.

This book is rather dark with Redd basically destroying Wonderland in an attempt to squelch the resistance against her rule. I am hoping it will be rebuilt in the second book.

It's a good read. A little slow in parts but it has a good plot line. A definite read if you like the original story but I think it would be enjoyable even if you are not familiar with the original story (I've only read parts of Alice in Wonderland and I have seen the Disney version).
Posted by Joy at 12:42 PM No comments:

I picked up Chalice by Robin McKinley a few days ago at Barnes and Noble. She is known for writing retellings of fairy tales and for her two books about the fictional land of Damar (one is a Newbery winner and the other was Newbery honor). I really like her writing style but I was disappointed with her last book Dragonhaven It was written in first person from the point of view of a teenager and while she pulled this off marvelously, it was really hard to read from that point of view because it was so scatterbrained so I quit after a few chapters (I have this rule that if a book doesn't hook me after a few chapters, I won't continue reading it).

Anyway, Chalice is not a fairy tale and it does not take place in Damar. Chalice is actually a girl named Mirasol. Chalice is actually her title, one of the member of the Circle. The Circle basically rules a region of land and Chalice is second in power only to the Master. The story opens with a new Master coming to power. The previous Chalice and Master died unexpectedly, leaving a vacuum. The position of Master is hereditary and the younger brother of the previous Master had been sent to live with the elemental priests of fire. His training had left him no longer quite human but he had decided to try to become the new Master because to get a new bloodline of Master would throw the land into disarray. To many it seems that he is not quite the best choice for Master.

Mirasol was a beekeeper before she was chosen as Chalice and the bees factor into the story quite a bit.

It is an interesting read. It begins a bit abruptly and doesn't quite fill you in on exactly what Chalice is. You sort of have to piece it together from the plot. However, it is a decent read and has an interesting storyline.
Posted by Joy at 6:19 AM No comments:

I figured I'd never see a White Christmas again. I mean, I live in Dallas-Fort Worth. It's not supposed to snow there and it was 70 degrees yesterday. Well, this was the view out my front door: 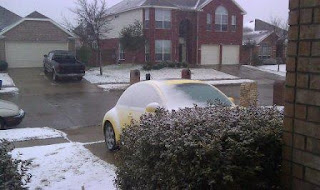 I don't think the stocking will be done by Christmas, but I continue to work on it. 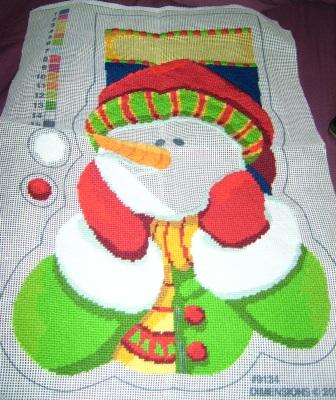 The people walking in darkness
have seen a great light;
on those living in the land of the shadow of death
a light has dawned.

The People Who Walked in Darkness


Rejoice greatly, O Daughter of Zion!
Shout, Daughter of Jerusalem!
See, your king comes to you,
righteous and having salvation,

In those days Caesar Augustus issued a decree that a census should be taken of the entire Roman world. (This was the first census that took place while Quirinius was governor of Syria.) And everyone went to his own town to register.

So Joseph also went up from the town of Nazareth in Galilee to Judea, to Bethlehem the town of David, because he belonged to the house and line of David. He went there to register with Mary, who was pledged to be married to him and was expecting a child. While they were there, the time came for the baby to be born, and she gave birth to her firstborn, a son. She wrapped him in cloths and placed him in a manger, because there was no room for them in the inn.

And there were shepherds living out in the fields nearby, keeping watch over their flocks at night. An angel of the Lord appeared to them, and the glory of the Lord shone around them, and they were terrified. 10But the angel said to them, "Do not be afraid. I bring you good news of great joy that will be for all the people. Today in the town of David a Savior has been born to you; he is Christ the Lord. This will be a sign to you: You will find a baby wrapped in cloths and lying in a manger."

Suddenly a great company of the heavenly host appeared with the angel, praising God and saying,
"Glory to God in the highest,
and on earth peace to men on whom his favor rests."

When the angels had left them and gone into heaven, the shepherds said to one another, "Let's go to Bethlehem and see this thing that has happened, which the Lord has told us about."

So they hurried off and found Mary and Joseph, and the baby, who was lying in the manger. When they had seen him, they spread the word concerning what had been told them about this child, and all who heard it were amazed at what the shepherds said to them. But Mary treasured up all these things and pondered them in her heart. The shepherds returned, glorifying and praising God for all the things they had heard and seen, which were just as they had been told.

There were Shepherds
Posted by Joy at 1:06 PM No comments:

[sigh] This year I think I actually feel a year older. Could be the lack of sleep connected with feeding the baby every 2-3 hours or so.

After listening to my family sing Happy Birthday horribly off key this morning, I got two presents.

My husband got me this:

and I got this from my aunt and uncle: 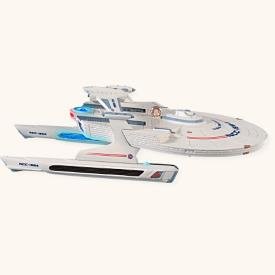 I think I will do my Christmas cards today (hey, better late than never)
Posted by Joy at 12:53 PM 1 comment: 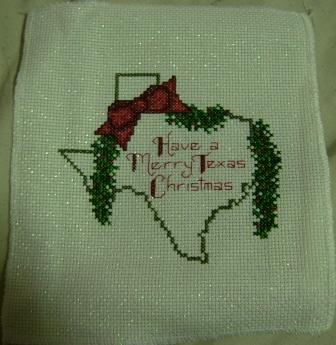 Here's what it looks like finished with buttons to hold the stitching in place. 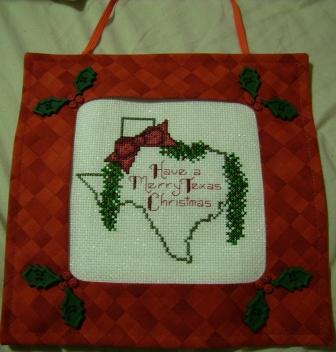 Another piece of good news: I fit into my prepregnancy jeans yesterday. Yay!
Posted by Joy at 9:20 PM 3 comments:

Progress on the WIP

I made even more progress this weekend on the Texas Christmas. Once I find some fresh batteries for the camera, I will take another picture and post it. Bad news for today: The baby was on a feeding spree that started somewhere around 6 pm and went until 3:30 am. She would not sleep. She was HUNGRY!
Posted by Joy at 2:33 PM 4 comments:

I'd say I've made decent progress since I only started this last night. 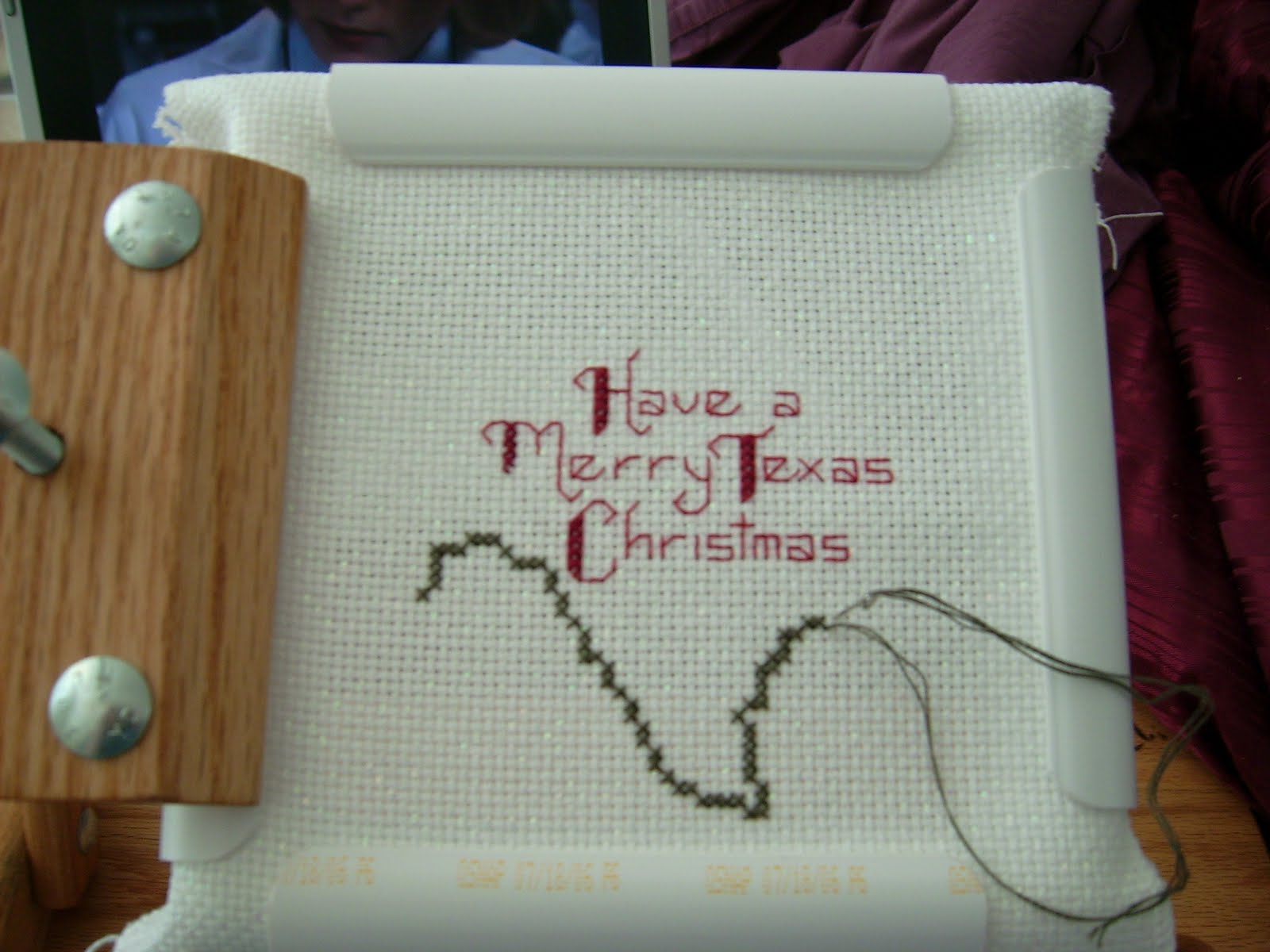 Tis the season. If I didn't have the baby, perhaps I'd do one myself.

http://feathersinthenest.blogspot.com/2009/11/christmas-give-way-for-special.html
Posted by Joy at 7:29 PM No comments:

I finally finished the hat today. Zoé did not sleep well for Mommy today and Mommy got a bit frustrated. But knitting the hat and watching Boston Legal cheered her up a bit. I've posted a picture of the finished project (the TLC Baby Amore did turn out nicely but I'm still not thrilled with working with it). I've also posted my laugh for today brought to you by Jerry Espenson singing along to the Boston Legal Theme. 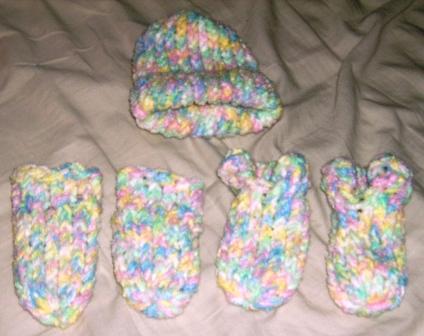 I came home today and there was a large package at the front door--a Pack 'n Play from my aunt, uncle and cousins.

Had a little bit of time to work on the hat, mitts and booties. Need to post pictures when I get them done.
Posted by Joy at 8:18 PM No comments:

I was supposed to go to a baby shower today. Didn't have time this week to make the gifts. I'm making a hat and booties and mitts (using the pattern on Knifty Knitter's website). It's a great pattern but I'm using TLC Baby Amore instead of my usual Simply Soft Baby (which I haven't seen around lately and I had the Amore on hand). Not sure that I like the yarn. I will take a picture when I get them finished. Going to bed soon to catch a little bit of sleep in between feedings
Posted by Joy at 9:30 PM 1 comment:

So, Zoé went in for her first checkup today. She's lost too much weight. Now I have to feed her every 2 hours, no exceptions and also supplement with formula. Don't think she's too fond of the formula. Starts looking to feed off Mommy instead (and you should have seen the face she gave Ken when he tried to give her a bottle). She's also a bit jaundiced. Have to go have her foot pricked again later today.

More pics have been posted in the picasa album (see last post).

Her name is actually pronounced zo-ay (French pronunciation)
Posted by Joy at 5:59 AM 5 comments:

So...my due date wasn't until Dec 18, but I woke up at about 1:30 am on Nov. 30 to discover that my water had broke. When we got to the hospital (Baylor Medical Center at Frisco), I was already at 3 cm. I opted for the epidural which they had to do twice (because the first one only numbed my left leg) which left me numbed for most of my contractions but it not numb the pain when I had to push. She was finally born at 11:54 am. 7lbs, 11 oz, 20 1/2 inches long. She's perfectly healthy even though she's 3 weeks early (I think someone miscalculated somewhere). 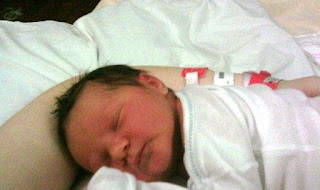