I started a new project today that I hope to have done in time for my mom's birthday.

When I started it, I noticed that the DMC colors listed did not look anything like the model and I really didn't like the shades, so I changed them.  Here's a peek. 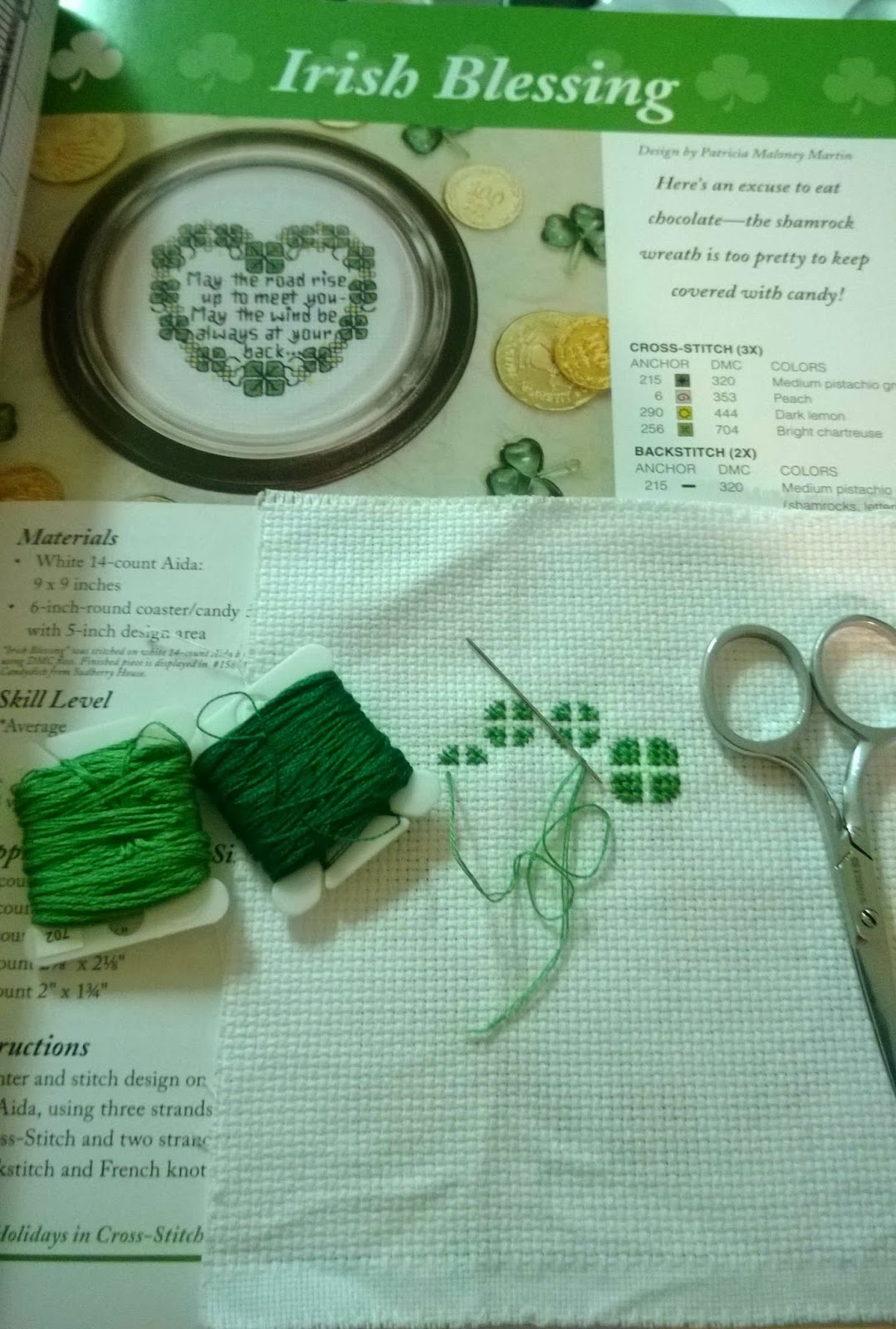 The Ridiculousness of it All

Let me tell you about a completely ridiculous situation that I have been involved in for the past 2 months.

If you're not in the United States, you should know that most of us Americans get our health insurance through our employers.  This insurance covers the employee and generally members of their immediate family such as a spouse and children.  And with all the new laws that have been passed concerning heath insurance, the prices have skyrocketed.  As a result, employers are meticulously verifying whether or not the people the employee is trying to claim on his or her insurance policy are actually eligible for coverage.  Often, they make their employees go through "dependent verification" to show proof of this.  I went through this before when I was the one employed.  It was annoying but generally not a huge deal.

Enter last December.  I had to do it for my husband's company.  I had to scan in our marriage license and the kids' birth certificates and last year's taxes.  It was all electronic and I thought "well, I'm done for the year."  Ha!  I was wrong.

I get a letter in the mail stating that the marriage license was missing from the documents that were submitted.  I called and they told me that a mistake had been made.  Apparently, my marriage license looks like the license that your pastor signs before you turn it in to the courthouse and you get something entirely different back that becomes "your license."  However, my license was signed by a justice of the peace so it was perfectly valid and I've never had it questioned before having used it before (for dependent verification even).  They assured me it would be fixed.

The New Year rolled around, and I got a letter saying all my health coverage had been cancelled because I was not "an eligible dependent."  I called again.  They said it was "pending."  It stayed "pending" until last week.  Now I have to wait 7 to 14 business days before I will get coverage again.

The whole situation is completely ridiculous.  How does it take 2 months to fix a problem?  I'm a bit infuriated right now.
Posted by Joy at 7:32 AM 2 comments:

Next week promises to be a bit crazy, so I'm going to take care of this today before I forget.

I was way under my $25 budget, coming out with $1.25 of things I bought at SCRAP.  My long awaited order from December finally came in but it doesn't count because I ordered it in December.

I had two starts.

I also worked on quite a few WIP/UFOs and was able to finish 2.

Today was my 5th wedding anniversary.  My husband took the day off and we went to a few bookstores and had breakfast and lunch out.  We had a great day.  Here's a look at his finished present: 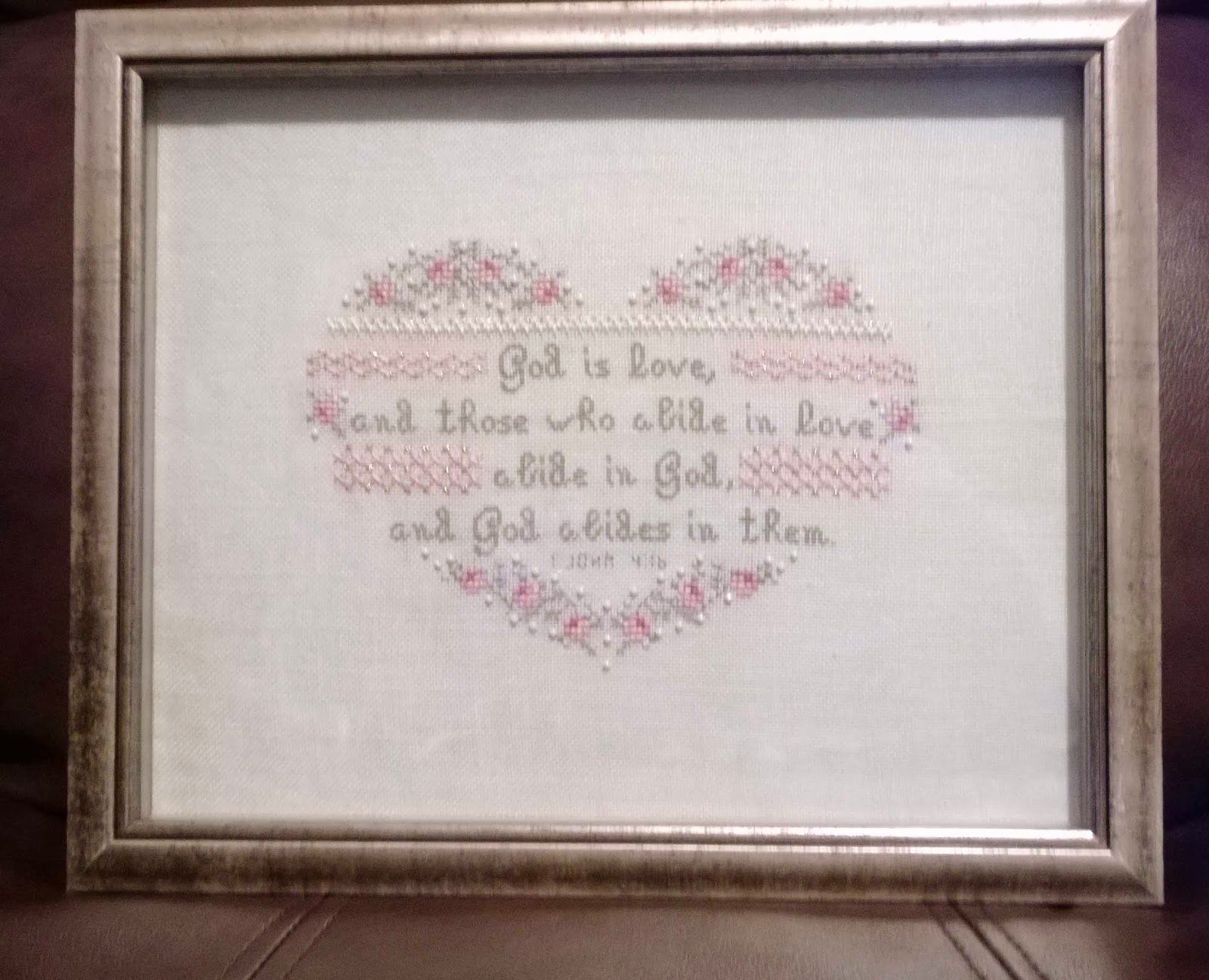 My youngest daughter has been diagnosed with Autism.  One of the major issues that parents of children with Autism face is sleep disruptions.  Adele has some issues going to sleep so after doing some research, I decided to try a weighted blanket.  However, these are very expensive online, with one in her size and appropriate weight starting at $80.  So, I found a tutorial on YouTube about making your own weighted blanket and I gave it a try.

For the fabric, I chose flannel because it is soft and it was on sale for $2.99 a yard at Jo-Ann.  I also bought three bags of Poly Pellets and a bag of Polyfill.  I looked around at the blankets for sale and decided on making a approx 36" x 50" blanket with 5 pounds of Poly Pellets and also stuffed lightly with Polyfil for extra comfort (Adele likes pillows).  The blanket has 6 columns and 8 rows for a total of 48 "pockets" so I put 1.6 ounces of pellets in each pocket (a kitchen food scale helps).  Overall, it cost me about $30 to make and took about 4 hours. 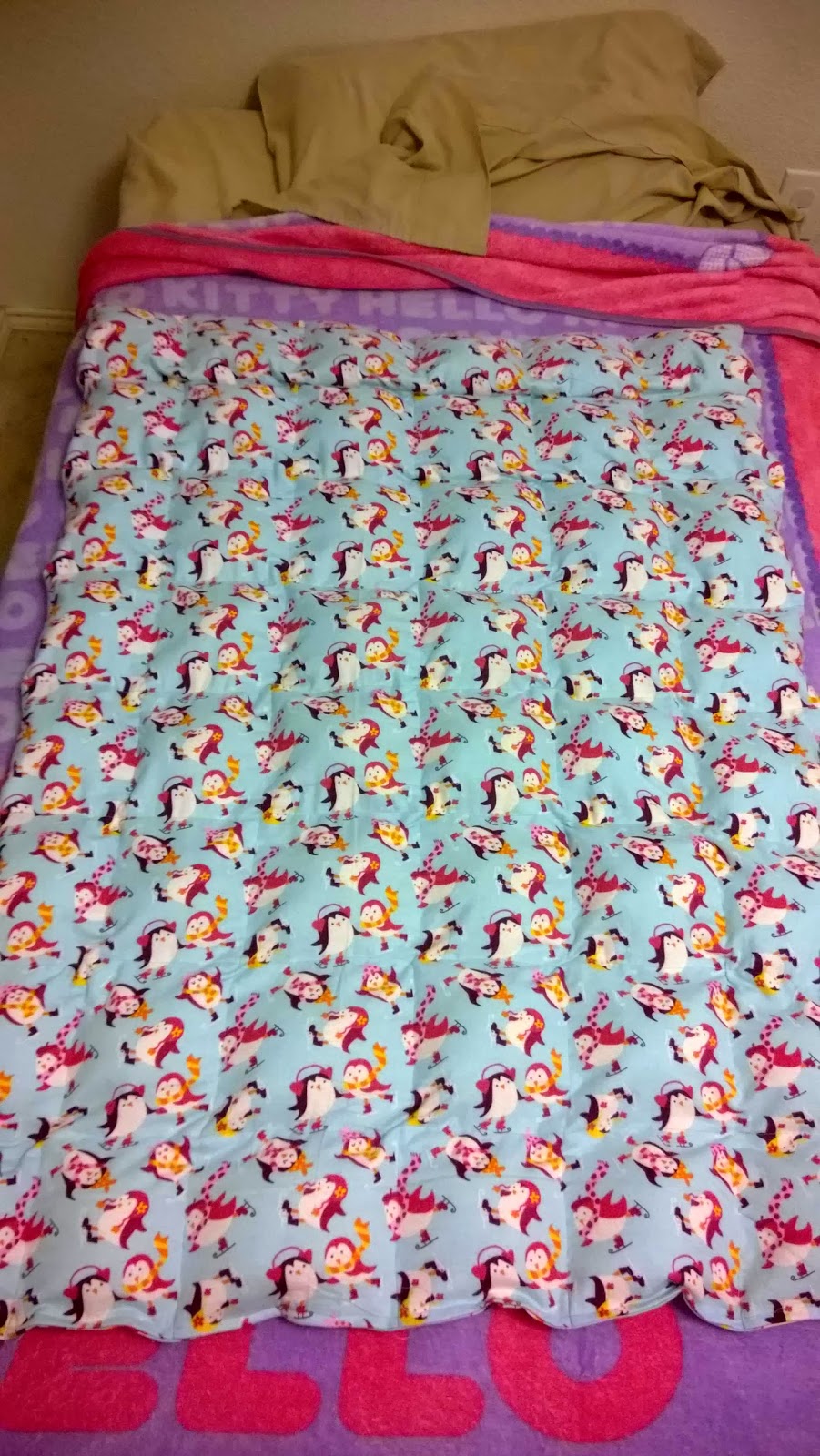 I am still judging its effectiveness.  She has been sleeping through the night while wearing it but I am still working on seeing if it makes a difference in getting her to go to sleep.  I also bought a remnant of My Little Pony fleece which I am planning to make into a weighted lap pad.  I just have to decide how many pounds I want to put into it.

I got as far as I could with Walt the Malt.  I am waiting on the Just Another Buttons to embellish him.  But how cute is a snowman in a malt cup. 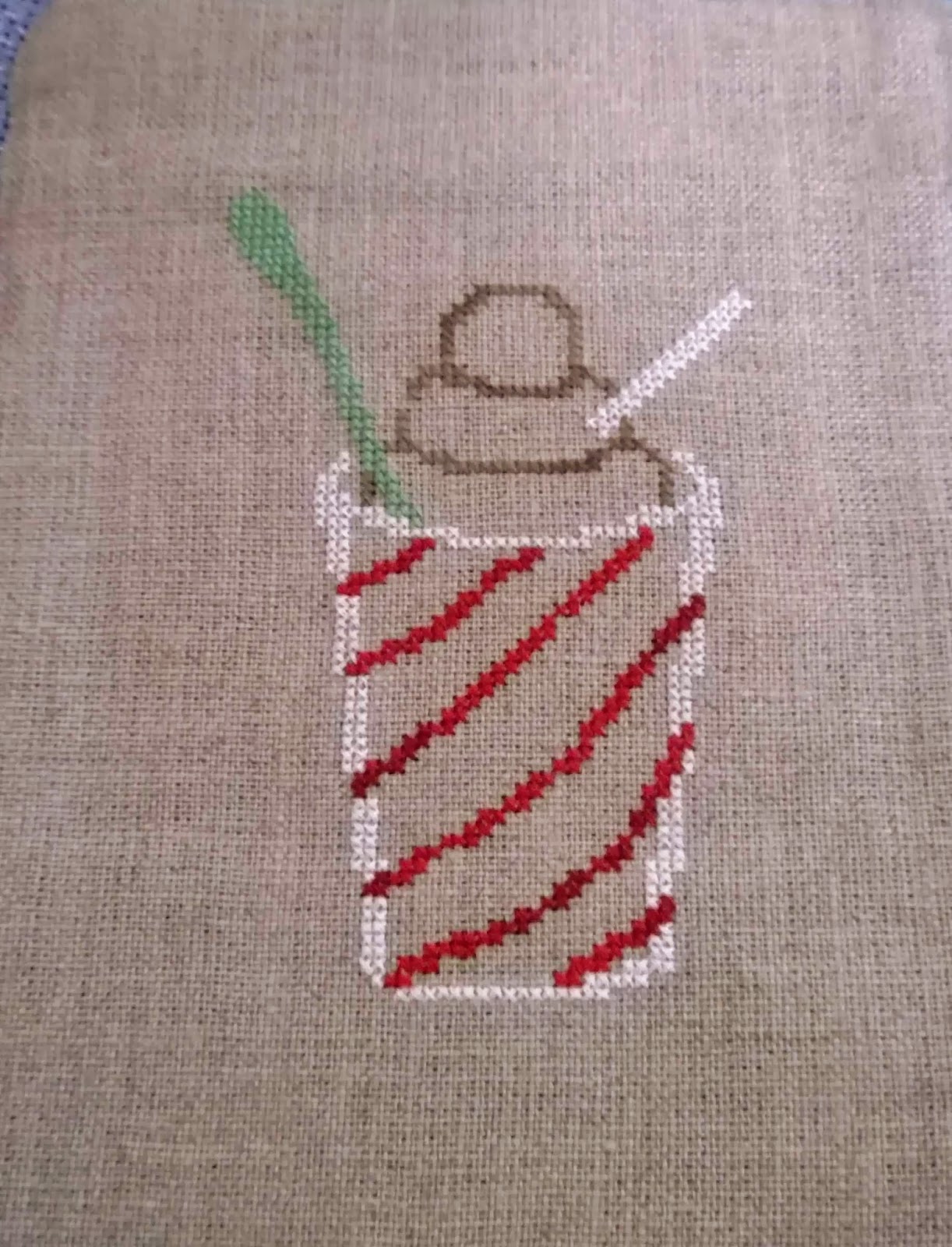 I also made a little progress on Traveling with Santa. 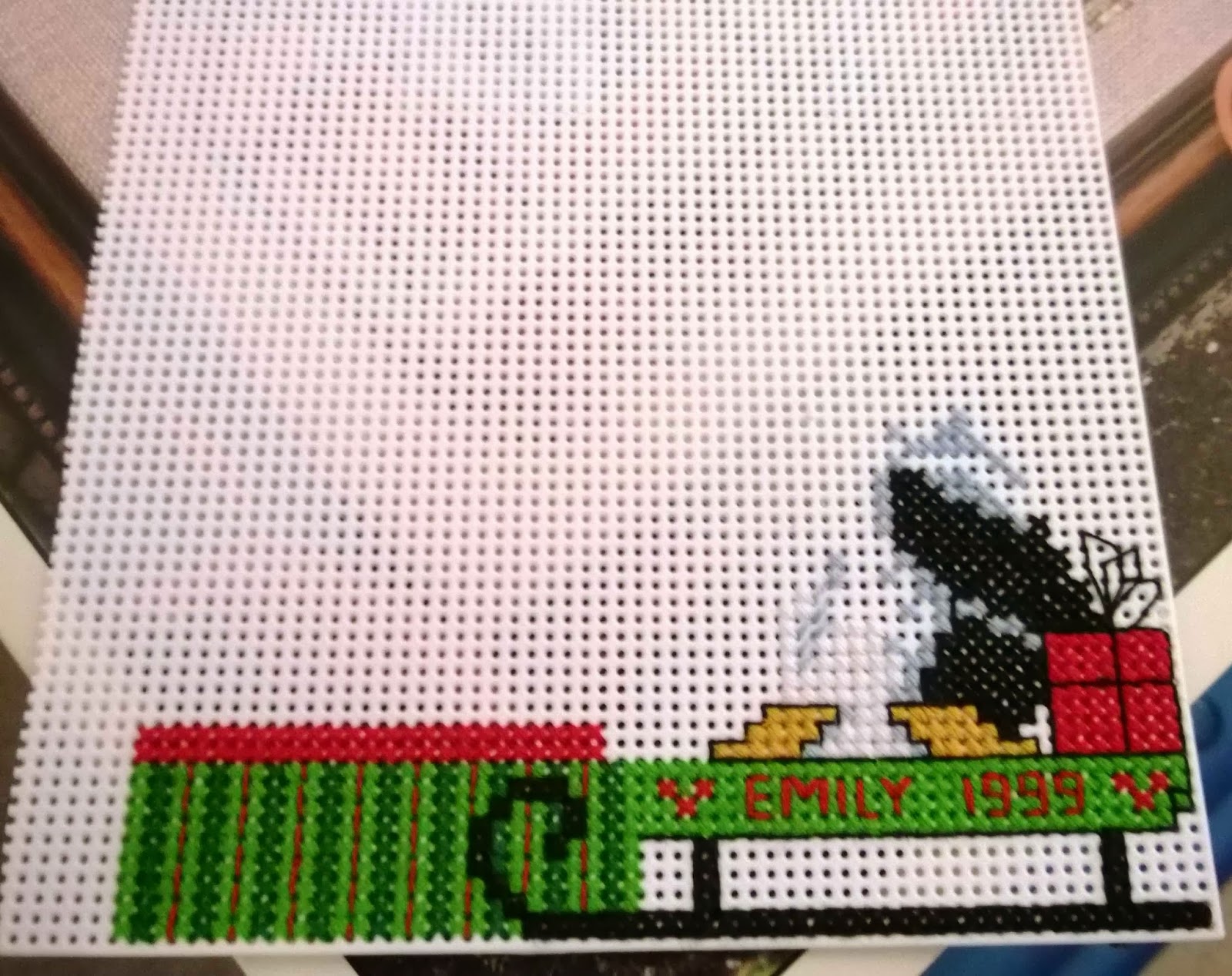 I was able to start a new ornament now that I have the stash from Needle in a Haystack (which, by the way, does not count toward my stitch from stash for this month since I did order it in December). It's called "Walt the Malt" and it's out of the JCS Ornament Issue 2008.  It is my first time working with the Sampler Threads from The Gentle Art (and also Simply Shaker, to be honest, I don't know why there is a difference).

It's a pretty quick stitch.  I love the color variation on the red.
Posted by Joy at 11:00 AM No comments:

I had a couple of finishes this morning (ok, so one was late last night, but that's close enough to today, right?).

The first is a pair of hearts that I am going to give to Zoé's teacher and paraprofessional for Valentine's Day.  I added some blending filament to the stars on the heart to give them some sparkle (it doesn't show up the greatest on the picture, sorry). 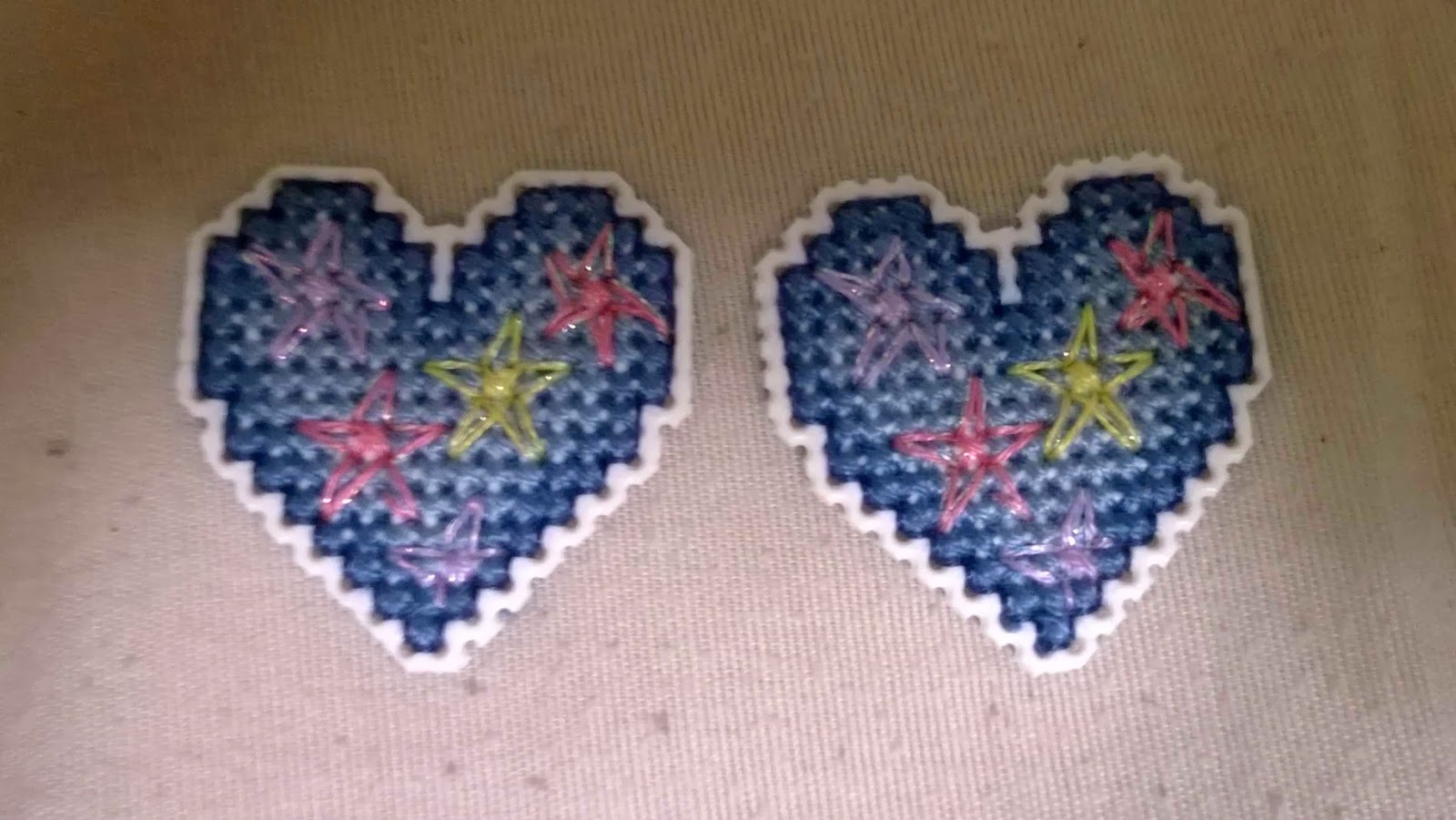 I was able to finish God is Love with the Silk Mori I received.

I was also able to put a face on Sparkles the Snowman.

I had a GREAT day today.  My husband and I had to go to Carrollton to pick up his work truck.  We had lunch in Irving at Cheddars.  We had never been there before but it was excellent food and I think we will be back.  The croissants, especially, were excellent.  After that, we went to Toys R Us to look for birthday presents for Adèle, who turns 3 on Saturday (can you believe it?).  I think she'll be very happy when she opens them.

When I got, home, my package from Needle in a Haystack had arrived.  They had been holding it, waiting for a shipment of JAB but since it has been about 2 months since I ordered it (and I needed the Silk Mori), I asked them to ship what they had and they're going to waive shipping on the back ordered stuff.  So nice.  They even figured out that the one JAB I was looking for was a misprint and found the correct one and added it to my order. I'll definitely order from them again.  Here's what was inside:

Just waiting for a few parts...

I am happy to announce that I finished all the stitching and beading on God is Love....except for those two colors of silk that are currently traveling here from California.  Here's a looksie. 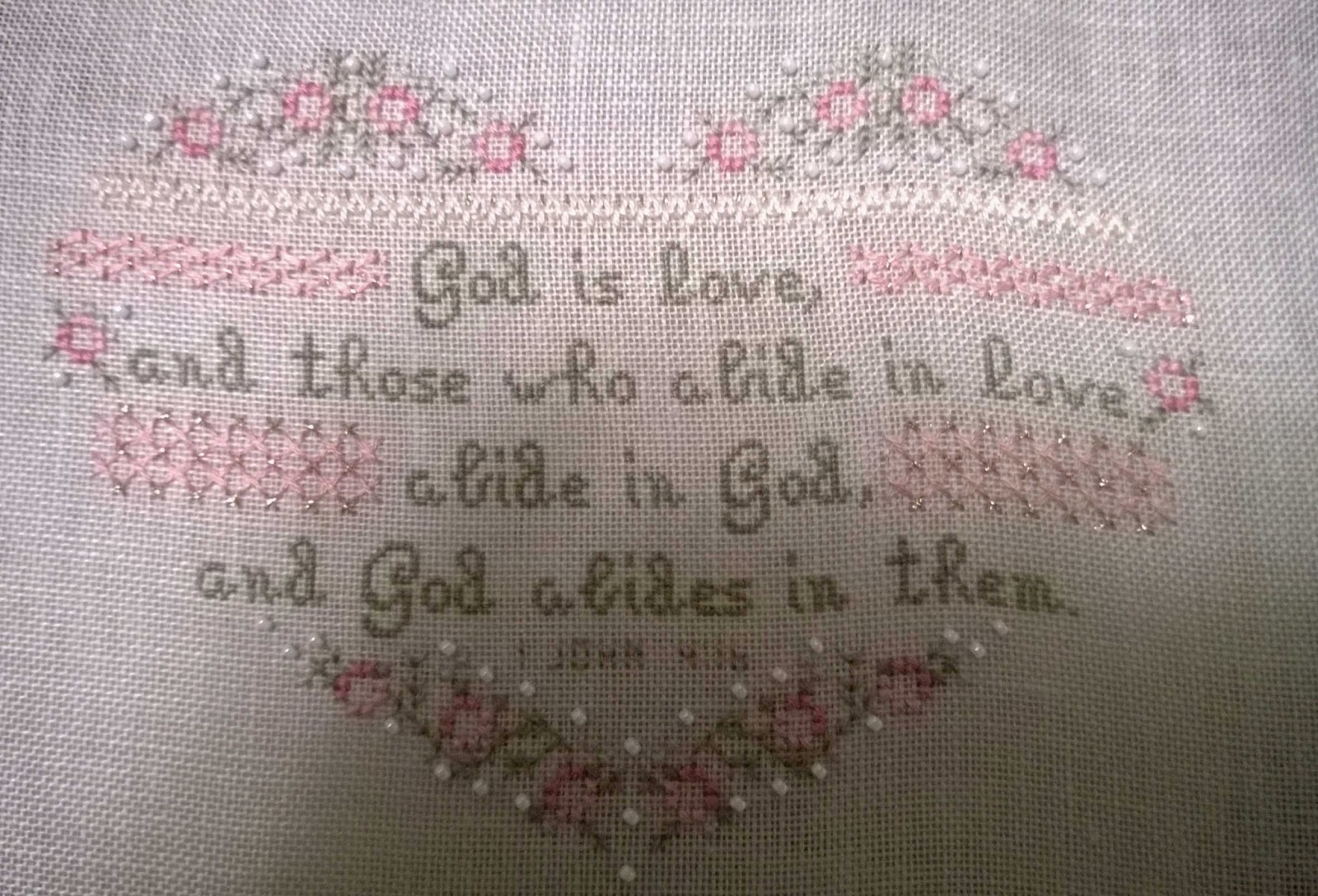 The End is in Sight!

I got a bunch of stitching done on God is Love today.  I am hoping to get more done tomorrow, but it might be a snow day.  We are up to 6 snow/ice days here which is insane!  Anyway, here's a picture. 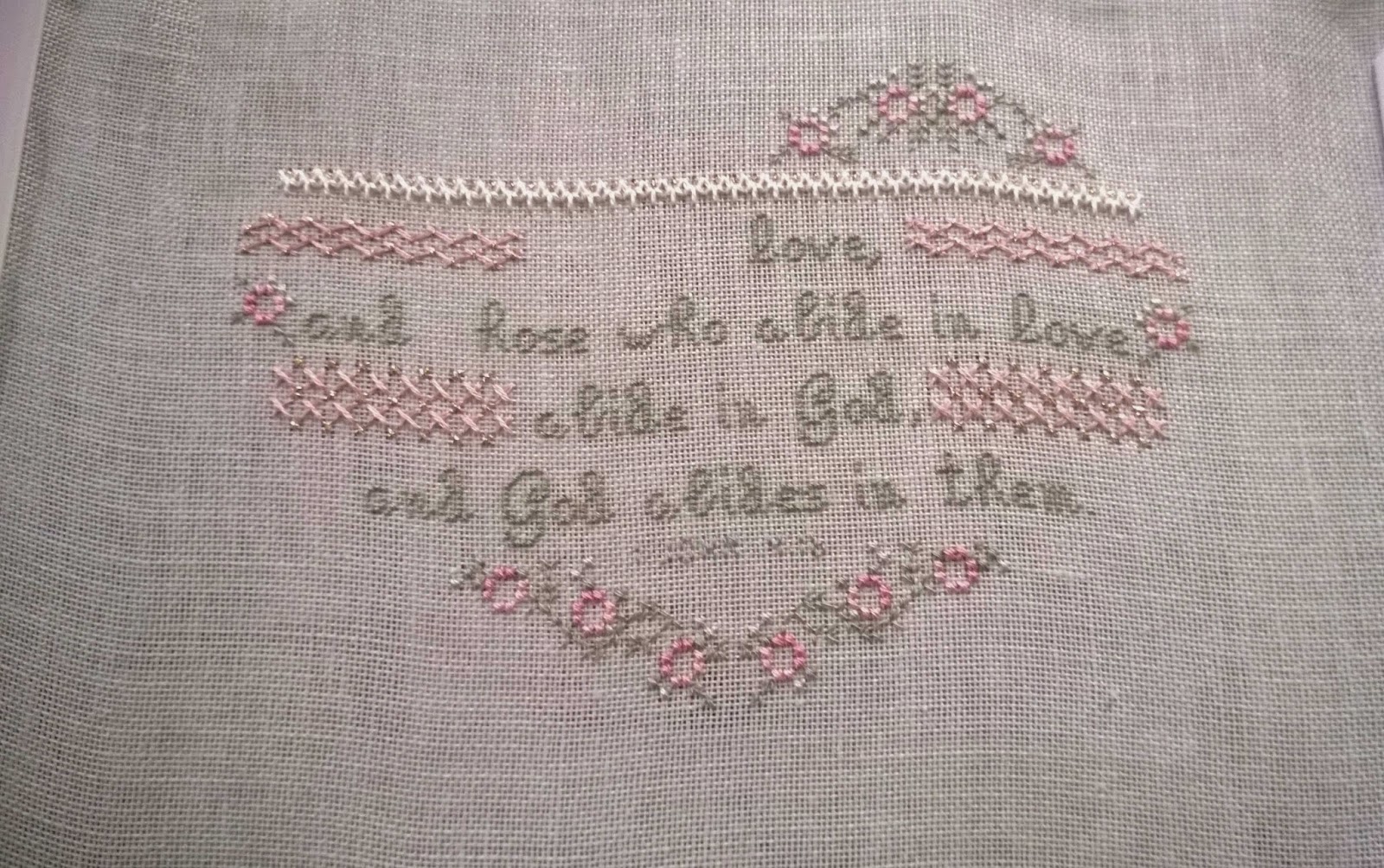 I have "God is" and the "t" of those left for letters (thank goodness because over 1 on 28 is really really small).  Then I have the upper left part of the heart.  After all of that, I will do the beading.  Needle in a Haystack shipped my order today so I am hoping to get the two colors of Silk Mori I need next week to finish the centers of the flowers.

I got a bit of stitching in today.  Still hoping to finish God is Love, if I ever get my order. 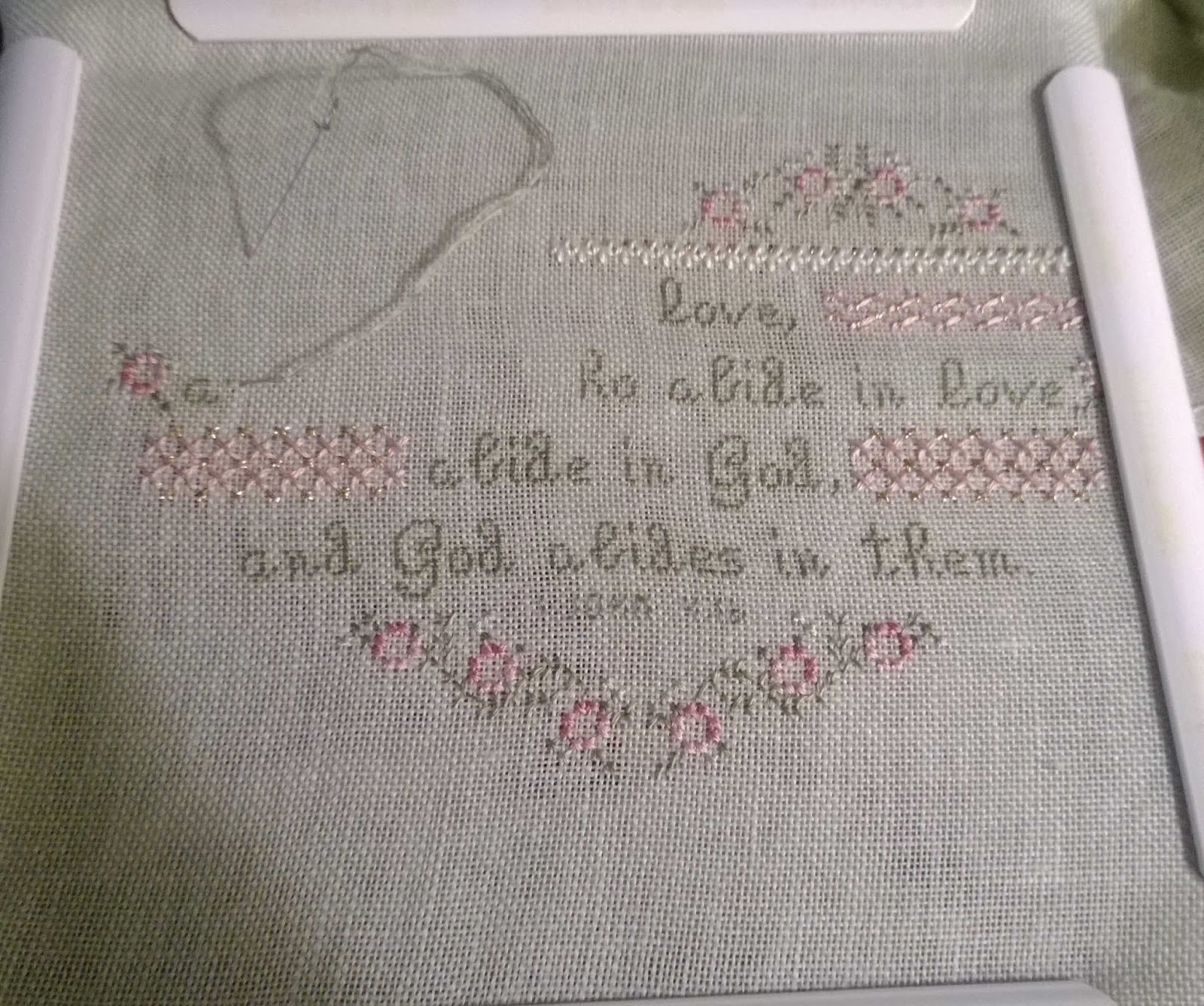 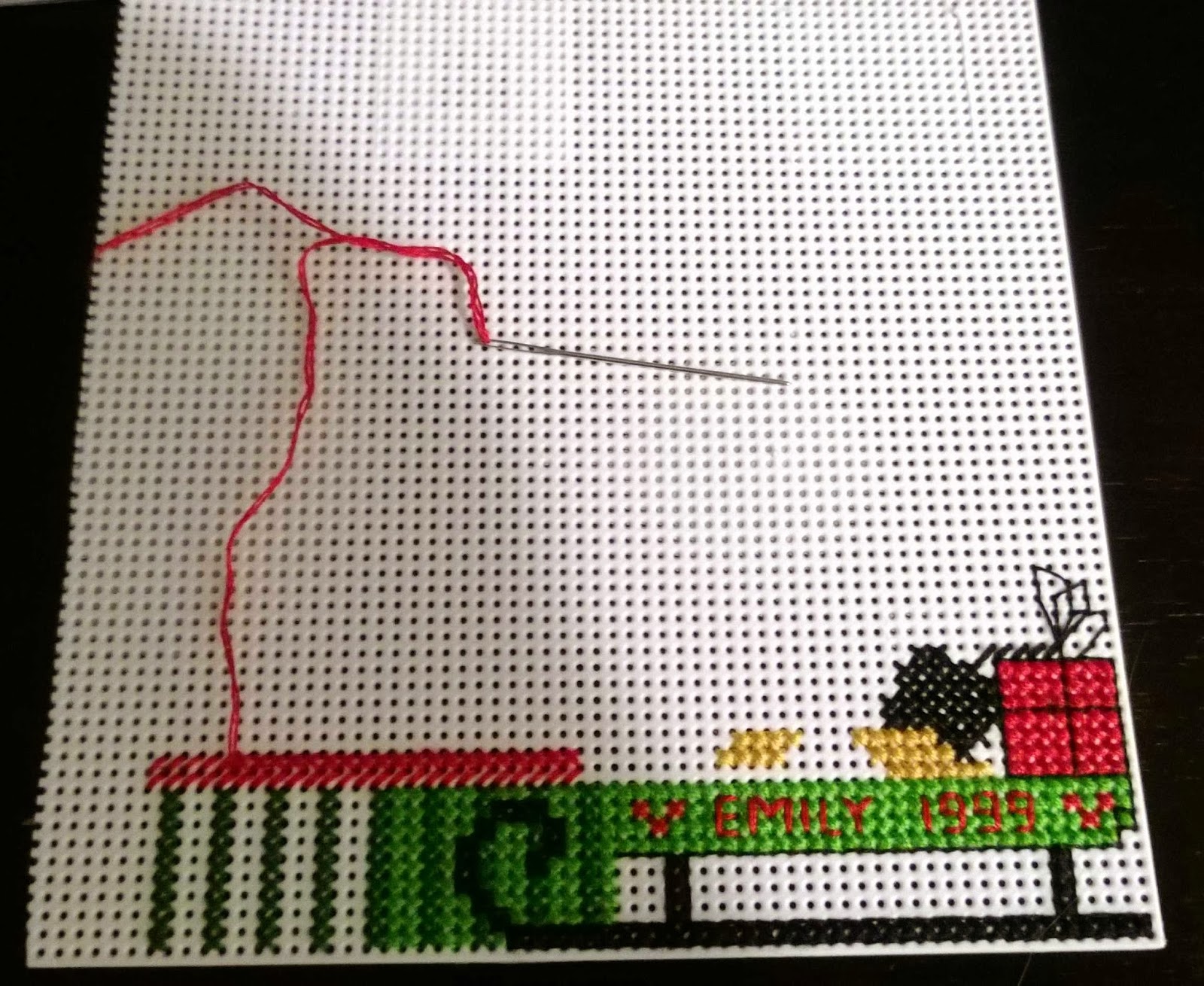 I decided to pick up one of my "this is going to take decades" stitching projects today and stitch a bit on it. It's "Snow White Discovers the Cottage," an MCG Textiles kit based on the painting by Thomas Kinkade.  It may not look like a lot of progress but I was focusing on filling in the numerous little holes in what I had already stitched. 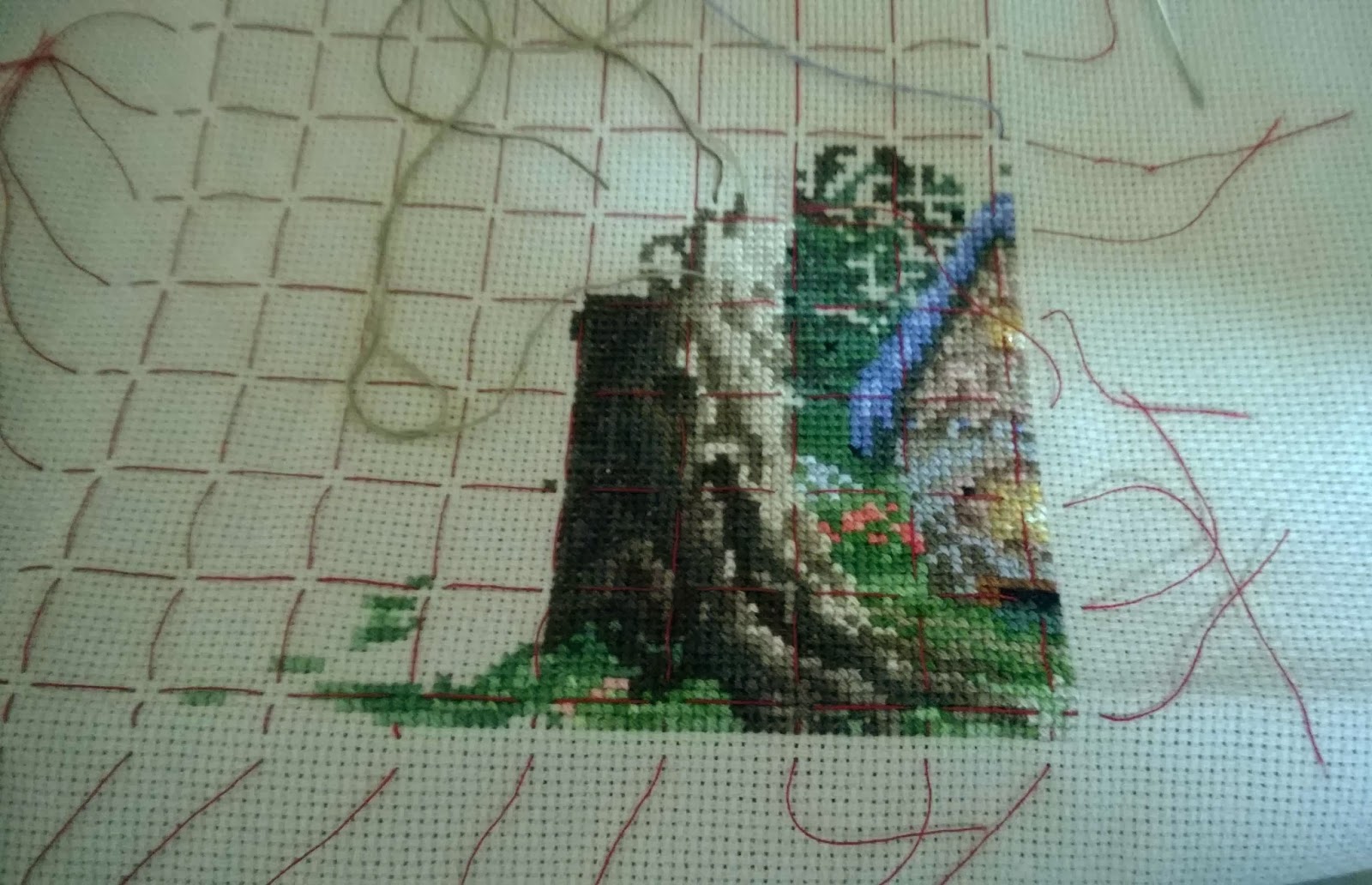 A Bit of Housekeeping

It has been a bit of an ongoing project to try to get pictures of things I have stitched in the past and to identify things that I have stitched (particularly ones from kits where I have thrown the stuff away).  I am happy to report that I have been able to identify about 90% of the stuff in my Finished Projects album (some of them just recently!).  I still have quite a few projects out there that I do not have pictures of because I gave them away as gifts.

I have also after years of playing around with them, decided on a standard format for my captions.

I hope y'all approve of the format
Posted by Joy at 9:24 PM No comments:

I finished the page I was working on off Do Not Meddle.  Here's what it looks like so far. 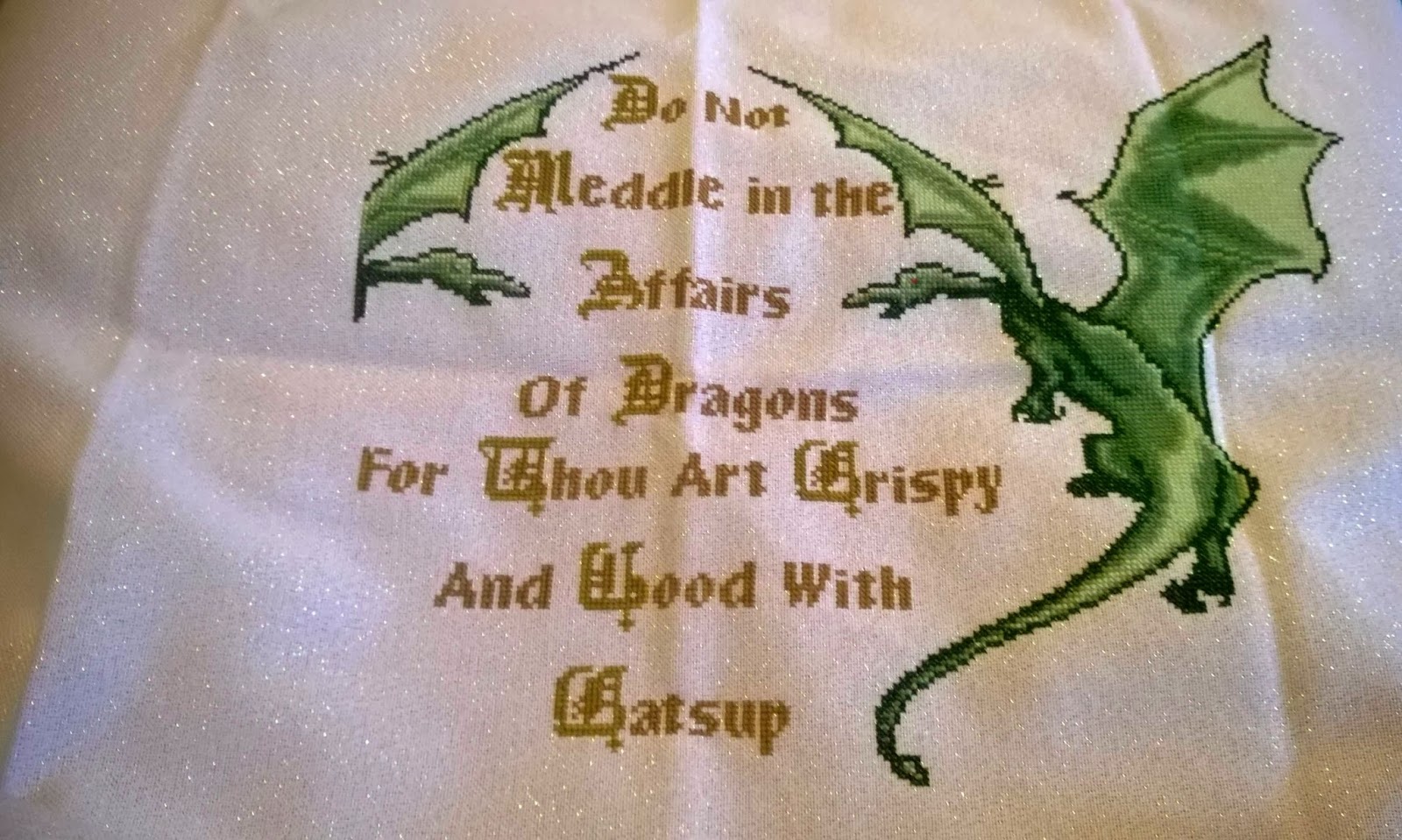 So now, I'm going to pick up another UFO/WIP to work on.  Haven't decided which one yet.  I can't believe it's February.  I hope I get God is Love done in time.
Posted by Joy at 2:36 PM 4 comments: