My goal this weekend was to finish the stockings. I completed Emily's stocking
and Zoe's is all but complete. Have to put the fringe on the scarf of the
snowman which I started today but gave up on because it's really hard to get the
needle through the holes with that much yarn on it. I'll do a little more
tomorrow. The fingers were getting sore. Also, I need to fire up my hot glue
gun as well for the pom poms.

Ironically, Emily's stocking was harder to stitch because it was 29 colors of
yarn with lots of shading and color changes but pretty easy to finish. Zoe's
stocking was pretty simple to stitch but had a ton of finishing embellishments
including sparkle yarn (which evidently I put on wrong as it was supposed to be
couched and I used it like regular yarn---oops, looks fine though), sequins,
fringe and needlepointing little embellishments that get tacked on later.
Posted by Joy at 11:50 PM 1 comment:

I have made quite a bit of progress on the stocking.  I believe it will be done by the end of the month.  We'll see though. 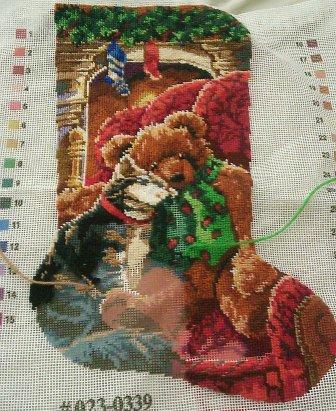 It is actually meeting up in the middle the way it's supposed to (I was getting worried).  It only appears that it may not meet at the very bottom where it appears to be shifted over one stitch.  I'll worry about that when I get there.

Thinking about making Zoe her own set of Christmas ornaments one per year....I know what this year's would be.
Posted by Joy at 3:08 PM 1 comment:

A Trip to Wisconsin

So, I kind of took a hiatus from stitching, internet and everything for a short exhausting trip to Wisconsin.  My great aunt passed away two weeks ago Saturday and the funeral was set for last Saturday.  I work Monday-Friday 4 pm to 12:30 am so I could make it if I got the Friday off.  My manager pulled some strings.  So I booked a flight on American Eagle that left Friday morning at 6:30 am (keep in mind that my Thursday night shift ended at 12:30 am Friday) and got into Milwaukee at 8:50 am.  Normally, I take Midwest Airlines who gives you lots of extra leg room but they just got bought out by Frontier.  We were packed in like sardines.  I took a shuttle bus from the airport in Milwaukee to the park and ride in Waukesha (my mother hates driving in Milwaukee).  My aunt was staying with her as well.  She had flown in from California.

Picked this up when we went shopping.  Even my husband thought it was cute.  Then again, the teacup bellpull is for him.... 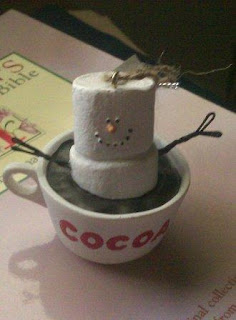 Had a lovely funeral on Saturday.  Got to hear stories from the family.  My aunt Kate (the one who died) was the youngest of the three sisters, my grandma was the oldest.  Their mother had died when my grandma was nine and my great grandfather Theodore was faced with trying to raise them on his own so he sent each of them to live with a different aunt until he could find another wife (which he did). 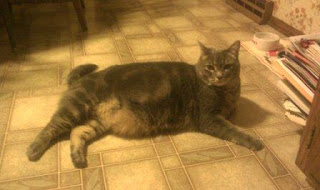 Also discovered that my mother's cat is getting very fat.


Snapped some more pictures of some of my grandma's cross stitching work:

I flew back on Monday morning at 5:55am and landed about 8 am.  Took the little tram around the airport to kill time while I waited for my husband (DFW is huge btw).  Then I had to work at 4 pm.  So, definitely exhausting.  But I got custard and cheese curds out of the trip.


Picked these up yesterday at a rummage sale.  I thought they'd go well with my katchina doll. 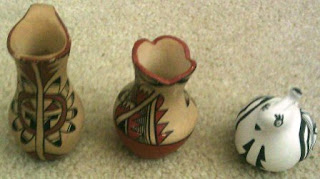 Also snapped some pictures of one of the finishes I left with my Mom and put it on my Picasa album
Posted by Joy at 4:02 PM No comments: