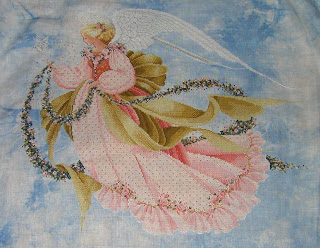 I can't believe Judith is giving this away. It's an unframed Angel of Summer (Lavender and Lace). It's gorgeous. You've gotta sign up for this one. If I win it, it's going into the baby's room.

This Thanksgiving, I was blessed to have my mother and mother and father-in-law over to our house. I am thankful for my loving husband, new family, the baby on the way and God's providence in this horrendous economic time. And also for the food which turned out marvelously.
Posted by Joy at 10:19 PM No comments:

It's been a busy week. My mother and mother-in-law are coming for Thanksgiving so there has been a cleaning frenzy. Got more baby stuff today handed down from one of the mothers at school.

The bassinet was looking a bit empty, so I thought I'd improve it. 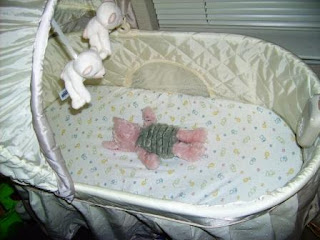 Then I decided that he looked a little cold. 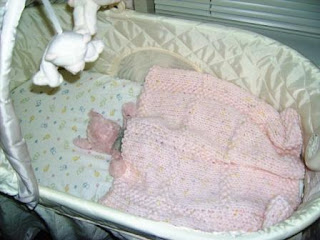 I'm not getting anxious at all. No, not at all.

Oh, here's the current progress on the stocking. We had 10-20 minutes between calls so I got a bit done. 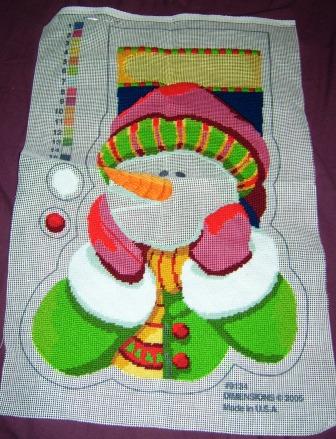 On a sad note, my beta, Mario, died today. I think the water here has something fish-toxic in it. I use Start Right in the water which I've used for 20 years and had great success (we kept a goldfish in a bowl for 16 years). I noticed that his fins were getting raggedy. I didn't realize that betas don't shed their fins like my goldfish did and didn't realize until it was too late that he was sick until he turned whitish and we changed the water with bottled spring water but I think it was too late and even though he seemed to have perked up, he died today.
Posted by Joy at 9:49 PM 5 comments:

Check out this excellent giveaway on Angela's blog. The box is gorgeous.

My Christmas present needs to stay away from yarn and floss

So, I got my Christmas present early. I've been wanting one of these for years but settled for a Dirt Devil last year because it was $50 and this was $550. But, it was on sale last night at Home Depot for like $440 and that's the cheapest I've EVER seen it....so we needed a new vacuum anyway, one that would do the stairs...so, it's now my Christmas present.

Perhaps it has TOO much suction, as I've already sucked up one ribbon and one sock. Both ended up wrapped around the beater bar. Fortunately, the beater bar pops right off.

They're not kidding when they say that the ball makes it more maneuverable. The motor is actually in the ball part so it actually doesn't feel heavy and awkward when you push the thing.

1. He invented his first vacuum in the 80s (after 5 years and 5127 prototypes). It had his cyclonic energy and it was bagless. When he tried to sell it to vacuum companies, they all turned him down because they make like $500 million a year in vacuum bag sales. So, he sold it to a Japanese company and it was a huge hit in Japan.

2. In 1993 he had made enough off the first vacuum to start his own company. Marketers and retailers didn't want to sell his DC01 because it had a clear bin and people didn't want to see the dirt that had been in their carpet (to which my husband said "Come on! Everyone opened up their vacuum bag to see what was inside.")

3. Dyson also has a bladeless fan and a hand dryer. They have the hand dryers at Ikea and they are awesome. They actually get your hands dry!


Oh, and to answer the question, "Why are these things so EXPENSIVE?"

Well, I found out that the motor is actually a digital motor run by a microchip which emits no carbon. The dust bin is made from the same stuff they use for riot shields. The ball is made of glass-reinforced polypropylene, the stuff they make car dashboards out of. Dyson also has its own microbiology lab. They actually keep live dust mites on site so they can experiment on how to get rid of them. That's why the vacuums are certified by 12 allergy associations worldwide. The thing comes with a 5 year warranty. They must be expecting it to last...
Posted by Joy at 11:16 AM 4 comments:

Finally finished watching tonight. Definitely some excellent parts. I especially liked Bill Nye the Science Guy as himself. The finale was also excellent. I wouldn't say it was the best of the 5 seasons though. I will be sad to see it go. I thought it was an excellent series with great cast chemistry. I honestly don't think Universe will last that long.
Posted by Joy at 9:48 PM No comments:

Progress Has Been Made! 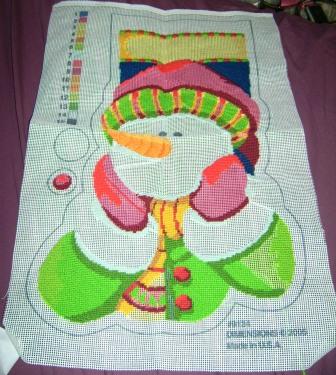 Yay! Got a lot more done on the stocking.

Tutorial: Making a bookmark out of plain Aida

I picked up this kit a few years back. But, you can use the idea with any piece of Aida. Take any count of Aida and cut a strip of it to fit your design. Make sure that you leave at least an extra half inch on each side.

When you are completed with the design, fold the extra Aida over on each side and stitch. For this particular bookmark, I used the backstitch boxes around the Pooh characters and lined up the holes with those on the back side to tack down the edges. You could also run a backstitch from top to bottom forming a border on each side or use thread that matches the Aida. As a last step, fray the edges on the top and bottom and you have a bookmark.

Today was a cleaning day. I finally put all my clothes into my closet. Why now, you ask? You only moved into the house mid-July. Well...seeing as most of my wardrobe no longer fits me (at least temporarily), I really didn't see the point of actually taking it out of the boxes. But as my mother will arrive here for Thanksgiving a week from Wednesday, I figured it was time. I also wrapped her Christmas presents (including the hat and scarflet).

We also did our Thanksgiving shopping. Got all the fixing for a pumpkin pie, sweet potatoes and the 18 lb turkey. You know, you can cheat now and get the pumpkin in the can with all the spices and you have to add is the 2 eggs and the evaporated milk. No fun I say (well, I also make my pie crust from scratch too).

Progress was made on the stocking. Hoping to post a picture tomorrow.
Posted by Joy at 9:42 PM No comments:

This is one of my favorite stitches that I have done. It is for the long loom only.

The trickiest part of this stitch is making sure that you wrap the loom the proper way. 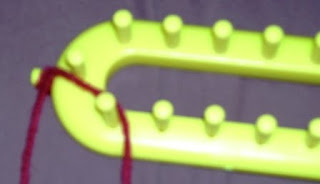 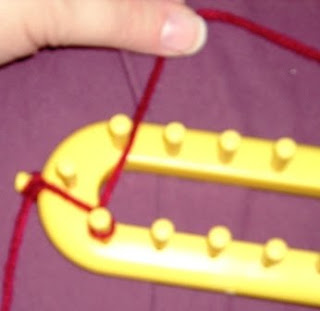 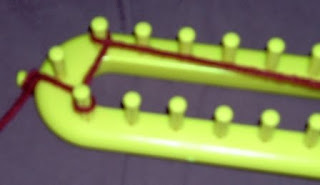 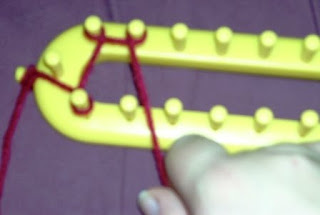 Keep wrapping the loom in this manner for the number of stitches that the loom calls for.

Go back over the loom, using the same wrapping pattern.

Some patterns call for the loom to be wrapped in this manner:

Start with the Ribbed Stitch shown above. Every so many rows, the pattern will tell you to switch directions. I am using green yarn so that it shows up better.

First is the turn. 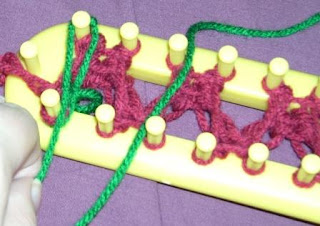 Then you will wrap in the same manner, except you will be going opposite the way you were going.

If you use the alternate method, it will look like this.

Today I was subjected to the movie "Mall Cop." It wasn't horrible and it had its moments but...it did mean 2 hours that I was paid to be off the phone. And there was pizza (fortunately, there's also Zantac and Mylanta).

Still don't know which hospital I'm going to but I do know that the baby's head is down.

My mother waited 50 minutes in line today to get her H1N1 vaccine. Apparently if you're under the age of 50, they squirt the live virus in your nose. Kind of glad I only got the normal flu shot yesterday. She's lucky and was able to have the shot form of the H1N1 vaccine.

Also have to share this link: Star Trek motivational posters Melia had it on her blog. Hee hee.
Posted by Joy at 7:08 PM No comments:

Of course the one day it's slow enough at work that I could have got some major work done on the stocking....I left it at home
Posted by Joy at 8:50 PM No comments:

Friday and Saturday happens to be my weekend. It was a lot of running. We were supposed to stay home and clean but...well...that didn't really get accomplished. Not much stitching got accomplished either. I did take all of the baby stuff out of the packages and organize it. I also made my husband stay up to 2 am Thursday night so we could get the bassinet and swing together. And I washed all the bottles. Yeah...I'm nesting. Got the diaper bag packed for the hospital already. I'm starting to get my stuff together too. Only 41 days to go, but you never know with babies. I could be having her tomorrow for all I know.


I will post pics of the stocking when I have more of it completed.
Posted by Joy at 9:47 PM No comments:

So, today I came home late (got the oil changed and then went to church) and I was greeted with baby stuff courtesy of Jackie (my stepson's ex-girlfriend). It was so sweet of her! I have stuff now. Like bottles and a bassinet and a swing and a hooded robe with Pooh ears on it.

Made progress on the stocking while I waited for the oil change. It took like 1 1/2 hours because they had to order parts for my diesel Beetle
Posted by Joy at 9:53 PM No comments:

Yay! Today I finished the hat. 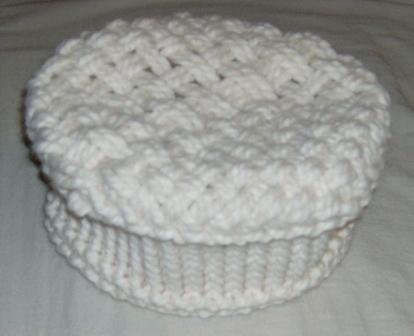 Working on Season 5 of Stargate Atlantis. Can't wait to see how they ended it. Only took me about 5 episodes to get the hat done :)
Posted by Joy at 9:50 PM No comments:

Well, I was able to successfully remove my partially finished Ruana from the yellow round loom so I could start my woven-top hat. I'm 100 rows in. I think it's looking good. The mock cables are looking good. I'm using Bernat Softee Chunky New Denim Heather. 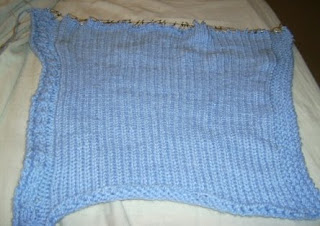 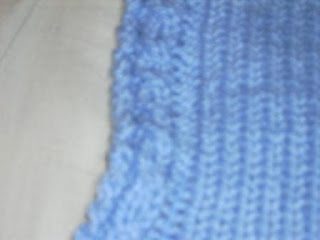 I'm using Lion Brand Wool-Ease Thick and Quick Fisherman's Wool on the large yellow round loom. Finished the woven top part. Kind of reminds me of a pie crust 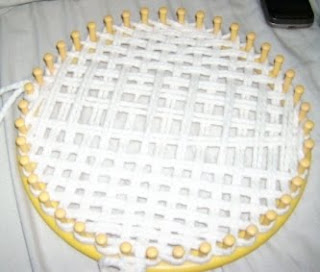 Grr....did the top of the hat not quite correctly, fortunately, it didn't take that much time to fix the problem
Posted by Joy at 5:26 PM 2 comments:

Back to the grind

Ugh, beginning of the week and the phone was already ringing off the hook bat 6am this morning. No chances for stitching today. :(
Posted by Joy at 8:26 AM No comments: