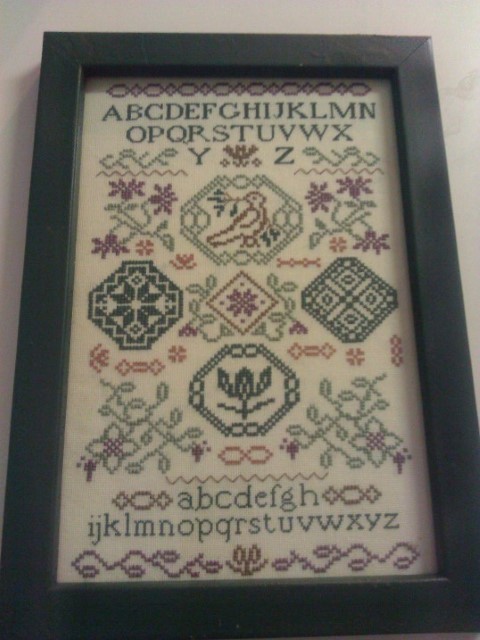 I finished up the mouse yesterday.  Here's what it looks like: 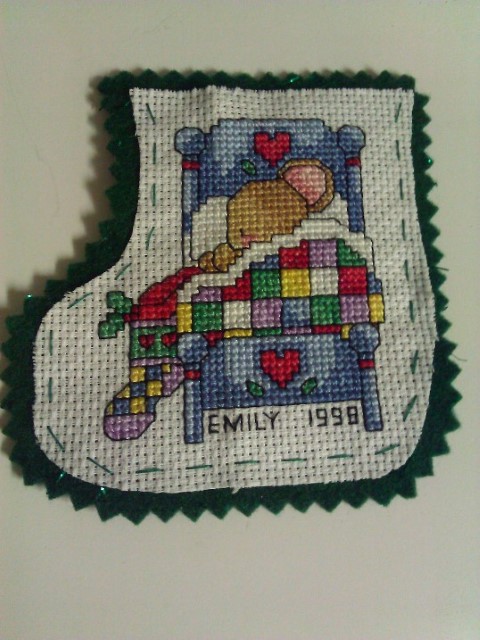 This weekend we had a few adventures out and about.  We got a new Jo-Anns.  The old one was very old and small so they built a new building by our new Kohl's.  I picked up a few things to make organizing my sewing thread better. 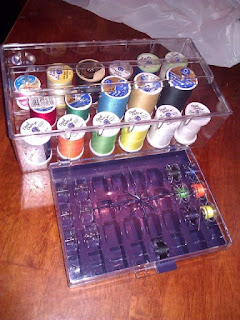 Then I put my sewing machine to use and made my husband a case to hold his plastic ties for work in. 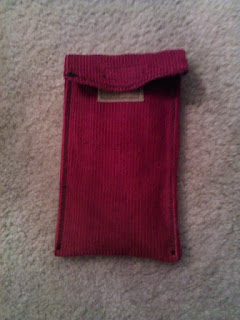 We are also enjoying some nice rice tonight courtesy of our new rice cooker. 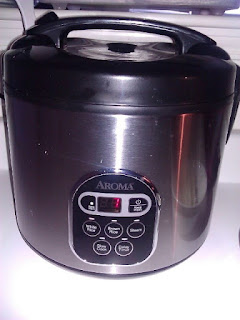 In stitching news, I've started on another ornament for Emily.

Most Likely My Last Finish for Awhile

I finished my Quaker Sampler today.  Most likely it will be my last finish for the time being.  Next week is my last "free week" before school starts and I don't forsee a lot of time for stitching things. 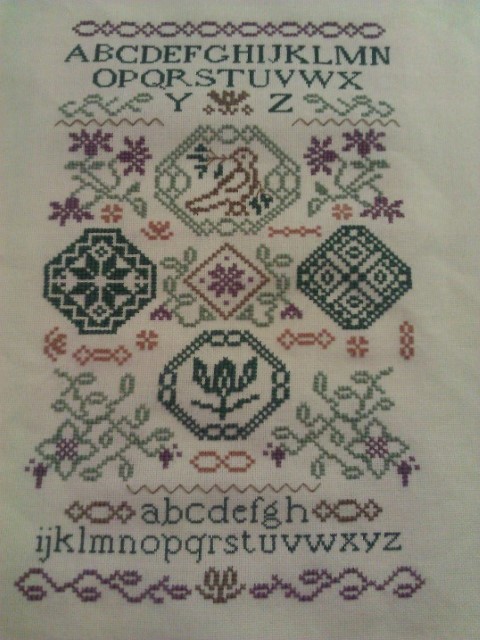 I have a frame that should fit it.  I just need to acquire a piece of board to mount it on.  I am still hoping to enter it in the local state fair.
Posted by Joy at 4:03 PM 4 comments:

I took a small break from the Quaker Sampler to work on the Sunflowers.  Here is what both look like.  A few days work and I think I can have the Quaker completed totally. 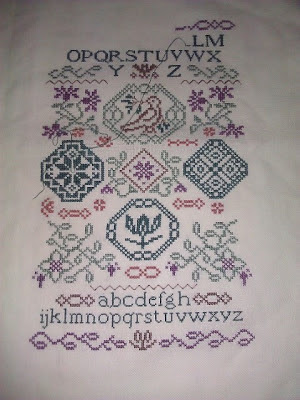 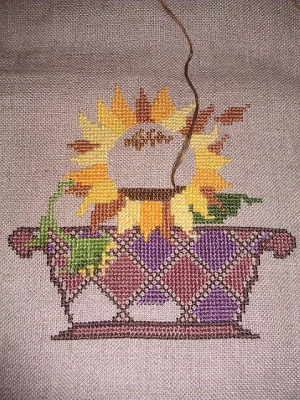 Another Ornament and Quaker update

This weekend, I finished up the ornament I was working on.  It's looking rather well. 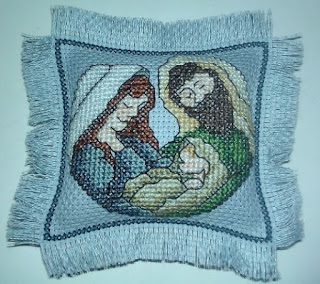 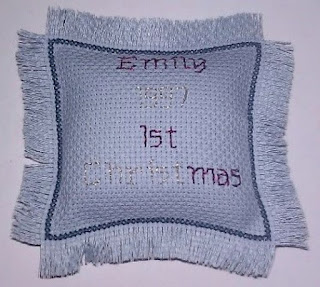 I finished that Sunday night.  This morning, I decided to finish frogging the Quaker and start again.  I made some amazing progress. 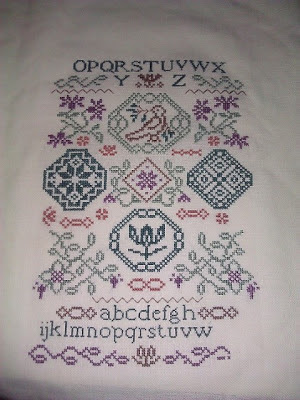 I just have a little to do in the bottom right corner and then I can move up to the top.  I hope the uppercase letters go as quickly as the lowercase.

School starts in 2 weeks.  Getting a bit more apprehensive.
Posted by Joy at 6:20 PM 2 comments:

I had to frog a bit on my Quaker sampler and I'm finding that frogging one over one on 28 count is really tedious because it's so small.  So, I decided to stitch an ornament (which, ironically, I'm also going to have to frog and I just started it!)


This is Emily's Nativity ornament for her first Christmas.
Posted by Joy at 3:33 PM 2 comments:

I have most of the regular stitching done on the Quaker piece.  Now it's all mostly petite stitches (1 over 1 on 28 count, not for those with poor eyesight).  I'm thinking about entering the piece in the state fair when I'm done.  I've never entered anything before and I figured it could be fun.  We'll see how the finished product looks. 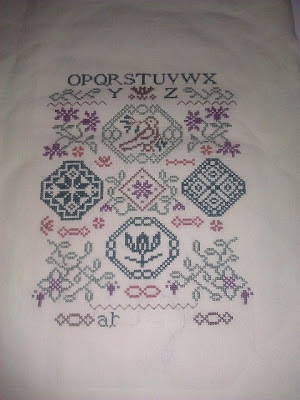 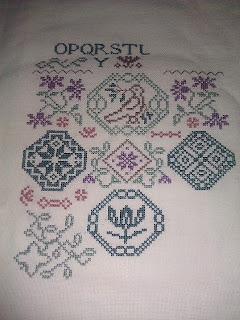 I have about 3 weeks left before I start college.  I got approved last week and I'm just waiting for some government paperwork before I'll be all set to go.

For my newer followers, I worked for 3 years for T-Mobile USA doing technical support.  T-Mobile had a mass layoff of workers last June and closed 7 call centers, including mine.  My husband was staying home with our children so money's been tight the last 9 months.  He finally found a job in April and is currently working 50-60 hours a week so I don't see him much.  I found out that I was trade affected so I can get additional training for free as long as it meets certain requirements.  I have a bachelor's in teaching but I don't have my license and I've been on alternative certification for 3 years but have been unable to find a teaching job.  So, I'm using this opportunity to get my Masters of Arts in Teaching.  I'll be able to student teach so I'll have my certification when I graduate instead of having to find a job and teach for a year to get certified.  I'm also adding the special education certification so I'll be taking 15 credits of special ed classes.

This is going to be a rigorous program.  I have to go full time as part of the program which is 9 credits.  I'll be finished in 5 semesters so I'll graduate December 2014.  I also have to maintain Bs in all my classes.  I'm a little apprehensive but at least I'm starting in the summer when my stepdaughter can help watch the girls if I have to write a paper.
Posted by Joy at 7:33 AM 1 comment:

My husband took me out to breakfast this morning at Old West Café.  The food was excellent.  Then when I got home, I got these: 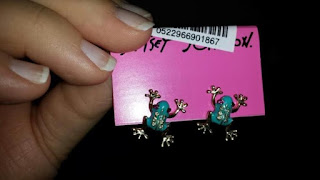 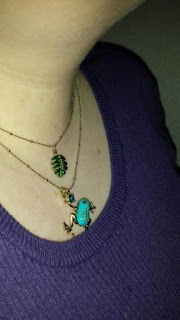 Zoe also made me a card in her preschool class. 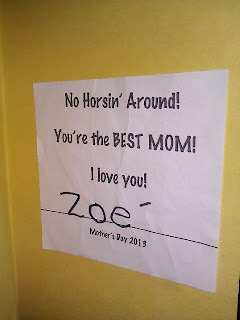 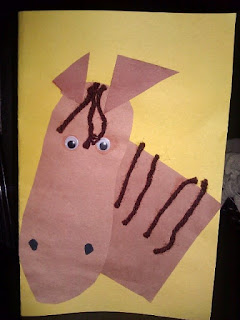 Yesterday, I went out to lunch with one of my former coworkers and her mom.  I brought Zoe along and she was very well behaved.  We had lunch a Rosa's Tortilla Factory and then we hit some thrift stores and I picked up some cool stuff.


I also worked a bit on the Quaker sampler through the week.  Those tan sections are actually tiny Algerian Eyelets.  I've gone with a 28 tapestry needle for everything on this. 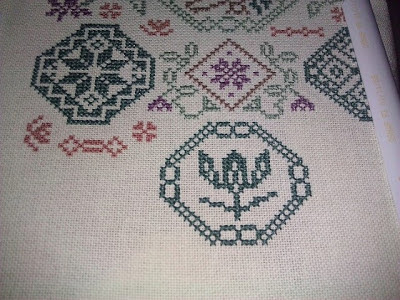 I'll admit it.  I've been watching a lot of My Little Pony Friendship is Magic lately.  The teenager got me and the girls hooked.  If you haven't watched the series, this is not My Little Pony of the past. The writing and animation are fantastic as are the messages about friendship.  You can catch many of the episodes on YouTube and the whole series so far is on Netflix.

One of the main characters is Fluttershy, a Pegasus pony (with wings) who's job is to tend to the animals. It's her special gift.  She also embodies the element of kindness because she is very kind and quiet and caring and shy.

I was thinking about acts of kindness that I've seen in my life tonight.  I'd thought I'd share a few.

At the beginning of my life, I lived with my parents in a condo.  It was actually more of a townhouse or row house and the three main buildings that made up the complex were arranged in a giant "U" with a courtyard in the middle.  There was a main sidewalk that formed a "T" and then every 2 units had their own sidewalk leading up to their shared stoop.  In between all of that was a lot a grass.  Lots of grass.  There was another common area by the parking lot too.  So, the complex hired someone to mow the grass.

Summer in Wisconsin could be hot.  Not nearly as hot as in Texas but still hot enough to be uncomfortable.  I remember in July and August on especially hot days, my mother would bring a glass of lemonade or ice water out to the guy mowing the lawns.

We moved to a new house when I was 8 and 13 years after that, my father died at our house.  An ambulance and firetruck came to the house.  Mom had to ride in the firetruck on the way to the hospital and the driver was...none other than the guy who used to mow the lawns at the condo.  And he remembered her as the lady who always used to get him something to drink on hot days.

Fast forward a few days to my father's funeral.  We had a 3 hours visitation and we probably could have gone 4 hours with all the people who showed up.  A couple showed up and we didn't know them at all.  Before my father lost his job, he worked for a small village called Pewaukee and one of his jobs was to help okaying new homes.  It was going through a bit of a population boom and there were a lot of new homes and sometimes there was a wait on the building inspector.  This couple had built a new house and needed to be out of their home but there was a wait on the building inspector and they were going to be homeless for a bit if they couldn't move in.  So my dad pulled some strings and went out of his way to make sure they could move in on time.  Years later, they remembered him and his kindness when they saw his obituary in the paper.

When I was 20, I got a job in Colorado for 10 weeks working for a church with my friend Becky.  We were at church on the weekend planning for VBS (which is a monumental undertaking, I might add) when a stranded motorist knocked on the door.  He was from out of town and his vehicle had broke down so we let him in and let him use the phone to contact his friend that he was visiting.  The friend was a ways away so he sat and chatted with him while he waited.  We explained what we were doing at the church and he told us that he was Catholic but he hadn't been to church for awhile because he didn't like how they had changed the service.  He also didn't read the Bible all that much because he said he had problems understanding it.  So we talked about the NIV (which our church uses) and how we liked it because it was easier to understand and how a study bible can help with parts that don't seem to make sense.  And we talked about what our church believed too.

A month later, we were practicing some music in the church, when the same guy comes in and hands us each a package.  He didn't stay long, just gave us the packages and left.  Inside each one was a new NIV study Bible (the one with the faux leather cover) and a $50 bill.  We were shocked.  Guess our kindness made an impression.

Some of us may not ever see anything come of the kindness we show to others but it should not discourage us from being kind to others.
Posted by Joy at 9:02 AM No comments:

I've switched back to the Quaker sampler for the time being.  Here's what it's looking like these days: 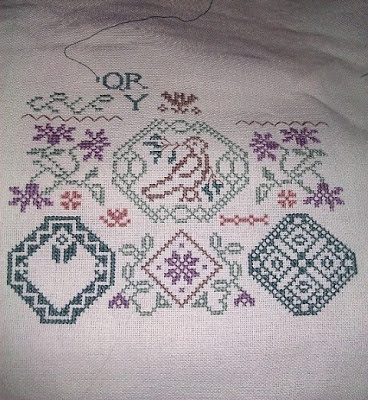 Today, my husband was supposed to be off but he worked anyway.  It was Free Comic Book Day so we headed down to Denton Square.  There was a bike race on the back road to Denton so I had to dodge cyclists in my big diesel truck.  When we got to Denton, there was a Cinco de Mayo parade so it was hard to navigate the square.  Then there was a long line to get into the comic book store so we skipped it and hit some other stores.

I found some random Mr. Potatohead pieces at the antique mall for $6.50.  I found parts for a santa Potato head and also some earmuffs.  I'm saving them for Adele's next visit with one of her therapists.  She should have fun.

I also found this book at the used book store for $2:

My husband had wanted it ever since I mentioned that Tomie dePaola had written it because his grandmother liked the legend.  So now we have this and the bluebonnets one.  They didn't have a lot of meaning to me until I moved down to Texas where we have bluebonnets and Indian paintbrushes.  They are out in full force this time of year (especially with all the extra rain).

On the way home, I hit the other comic book store in town (two colleges in Denton = lots o Geeks).  I picked up some free comic books and then proceeded to spoil my husband's mother's day surprise by acquiring this:

Here is my stitching for this week: 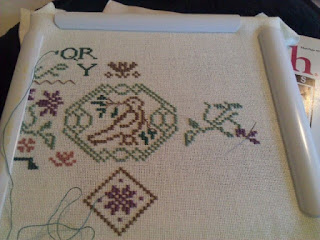 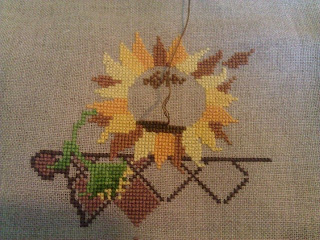 I think the colors really pop on the natural linen.﻿
Posted by Joy at 11:16 PM No comments: