I enjoyed the audio version of this book.  It's a narrative about the year 1776 with the events of the revolutionary war.

A funny book - Fortunately, the Milk by Neil Gaiman

A father goes out to get milk for his children and doesn't return for a long time.  When he gets back, he has a tale involving space aliens, pirates and a time-traveling stegosaurus.

A book of short stories - Thistle and Thyme: Tales and Legends from Scotland by Sorche Nic Leodhas

This is a collection of stories from Scotland. I really liked them.

A computer program leads Martin to the Middle Ages where he tries to pose as a wizard.  I also read the sequel, Spell or High Water which was also great.

A book your mom loves - Lad: A Dog by Albert Payson Terhune

I had to call my mom to find out what books she actually likes because she's not a prolific reader.  This was a favorite from her childhood and I found that it wasn't that bad.

A book with antonyms in the title - Over Sea, Under Stone by Susan Cooper

I was having problems finding a book for this category, until I found a list and realized that I'd already read one a few months ago!  Hooray for scratching off lists.

A book with bad reviews - The Glass Magician by Charlie N. Homberg

I originally didn't read this sequel to The Paper Magician because a lot of the early reviews were negative.  I actually thought it was okay.

I listened to the Audible version of this great Shakespearean Star Wars.   There was even a "hey nonny nonny" song in it.  I liked it so much, I also managed to squeeze in listening to The Empire Striketh Back.

Other books -
Star Trek The Next Generation #10 A Rock and a Hard Place by Peter David - Commander Riker is temporarily reassigned to a terraforming project and the Enterprise gets a new and possibly insane first officer.
The Tillerman Cycle #1-3 by Cynthia Voigt
- Homecoming - After their mother abandons them, Dicey leads her siblings on foot to Bridgeport.
- Dicey's Song - Dicey and her siblings adjust to life with Gram.
- A Solitary Blue - Jeff's mother walks out on Jeff and the Professor but causes issues when she tries to reenter his life when he is older.
King of the Wind by Marguerite Henry - A story about a well bred Arabian horse who is passed from owner to owner in France with his handler boy.
Call it Courage by Armstrong Sperry - I didn't like this book about a boy who is afraid of the sea.
Scorpions by Walter Dean Myers - The writing was really good but the plot lost me with all the gangs and such.  It's not really my thing.
What Hearts by Bruce Brooks - An interesting story of a boy told in four sections but the book lost me when it got to the baseball section.  Sports fantasy is not one of my favorites.  The ending wasn't great either.
The Higher Power of Lucky by Susan Patron - The 2007 Newbery medal winner about a girl named Lucky who is searching for her higher power.
Al Capone Does my Shirts by Gennifer Choldenko - A pretty serious book about a family who lives on Alcatraz Island with an Autistic daughter.
The True Meaning of Smekday by Adam Rex - The book that the movie Home is based on.
Shen of the Sea by Arthur Bowie Chrisman - The 1926 Newbery medal winner and a disappointing collection of Chinese tales.
Posted by Joy at 7:00 AM No comments:

I realized that Mother's Day is like a week and a half away and I still hadn't made the needlebook for my mother.  I was able to crank it out in two days. 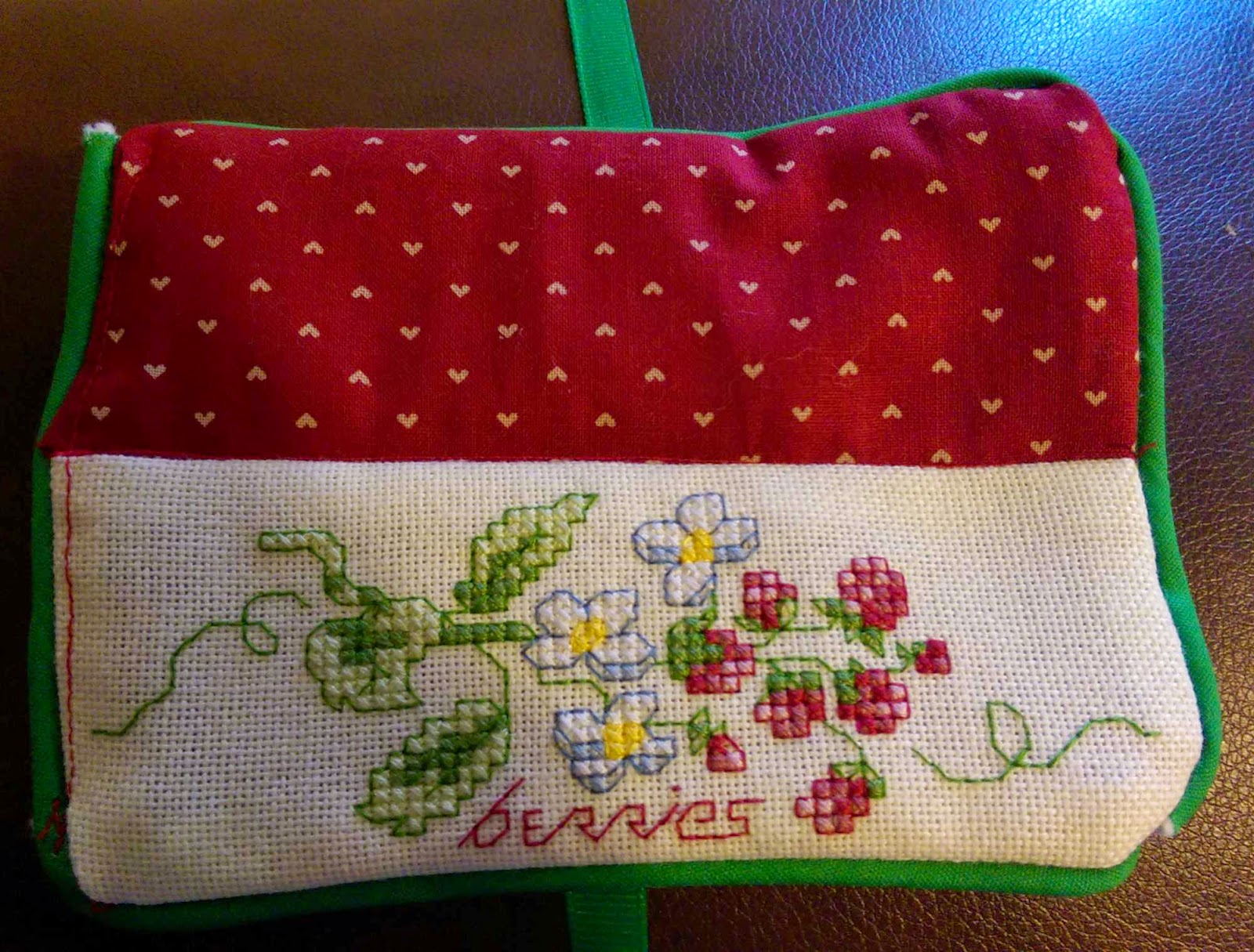 It's out of a great little book that has earned its keep over the years called 365 Tiny Cross Stitch Designs done by Kooler Design Studio.  My teapot banner is out of that book.
Posted by Joy at 7:30 PM 1 comment:

I didn't quite get this one done in time for the April update, but I finally finished up my Fuji page!

There is just one small page left to do for the bottom of the stem. 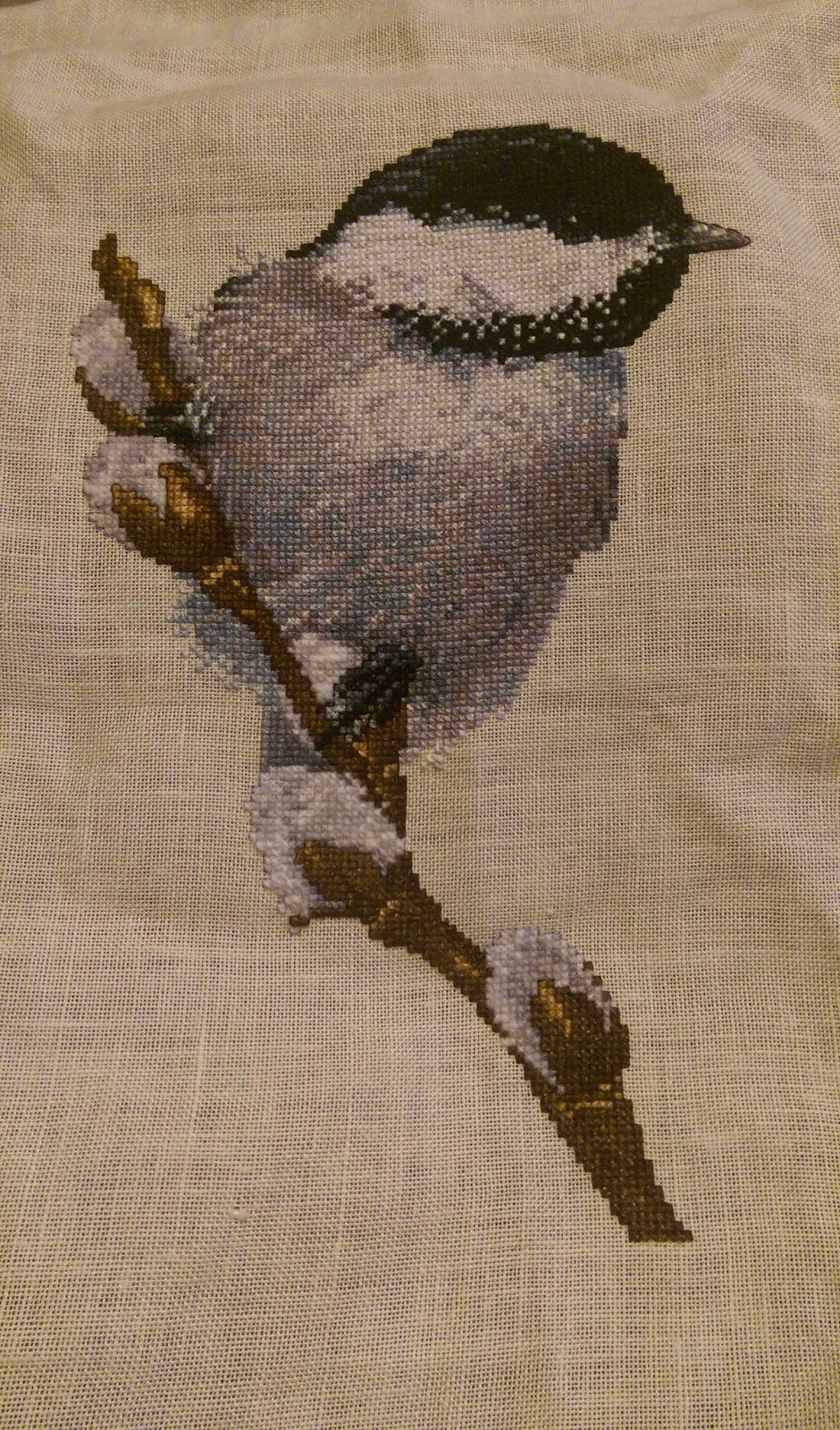 This Stitch from Stash update kind of snuck up on me.  I saw Mel's post and was like "is it that time already?"  I feel I didn't get a lot done this month but my husband took a week of vacation last week and there was a lot of running around and getting stuff done.  I finally got my front tooth rebonded so I have my smile back!

I spent a little this month.  I took a trip to SCRAP and picked up a few patterns and a piece of linen.  I don't know if I'll ever spent that carryover amount.

I finished a page on "Do Not Meddle"  This leaves me with only two pages to go and they are small pages.  For those of you who have read this piece's history on Stitching the Night Away, it is a rather old UFO which I started before I got married (and I've been married 6 years!).  My goal is to finish it this year. 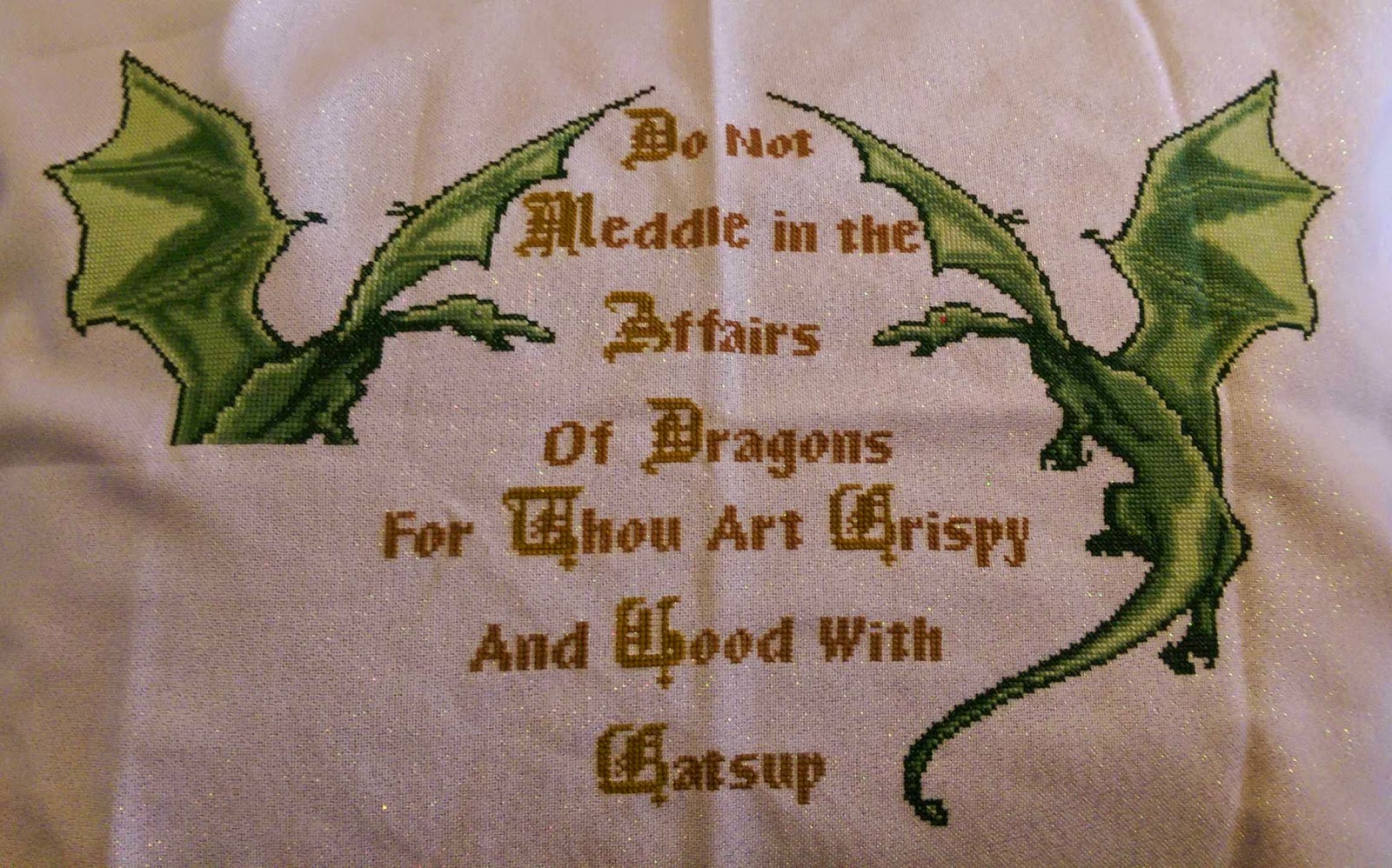 I almost finished a page on Fuji.  There will be one really small page once I finish the current page. 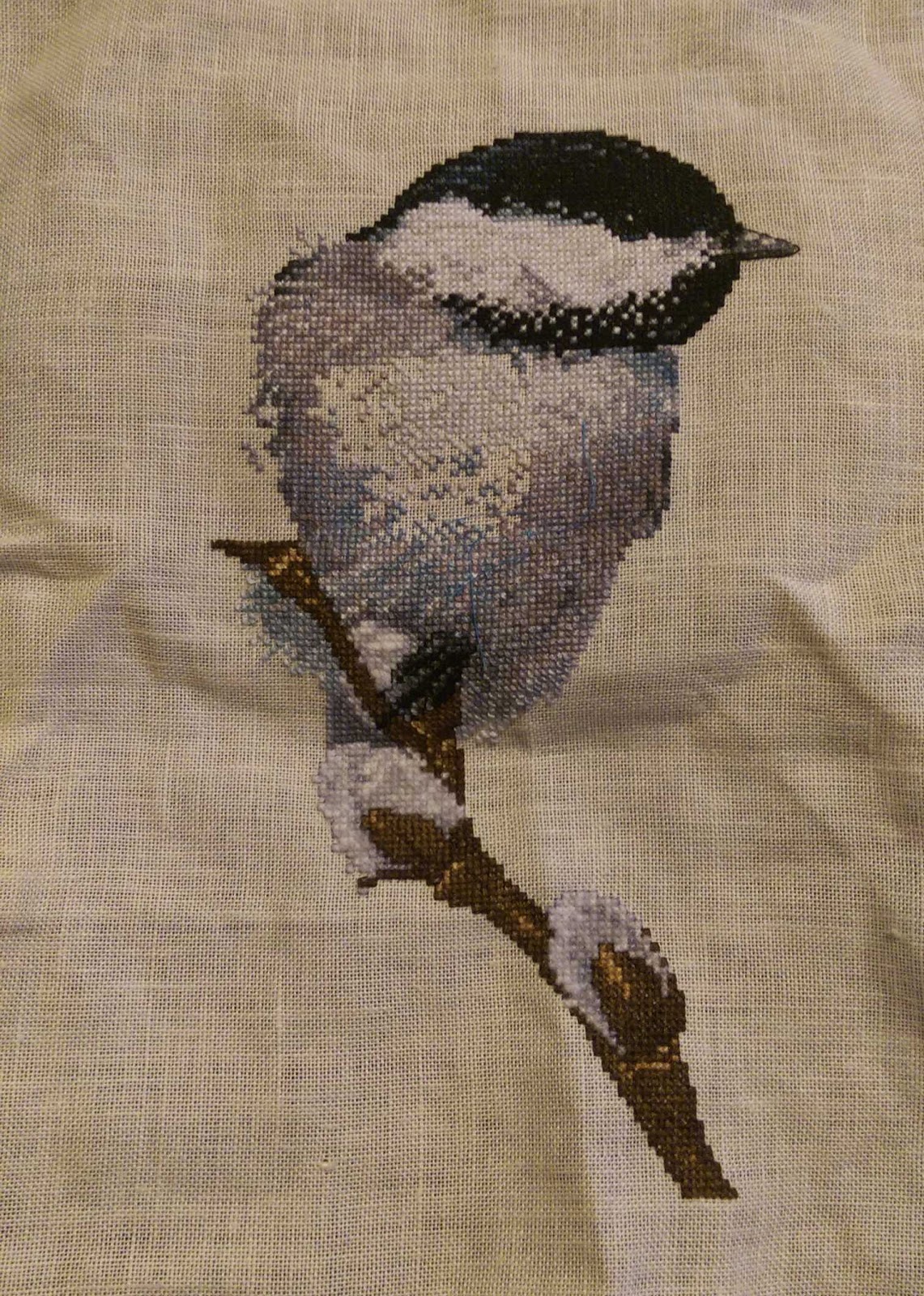 As far a new starts, I have three.  I started Octopus's Garden which doesn't count as from stash since I just got the pattern.  I didn't stitch much of it. 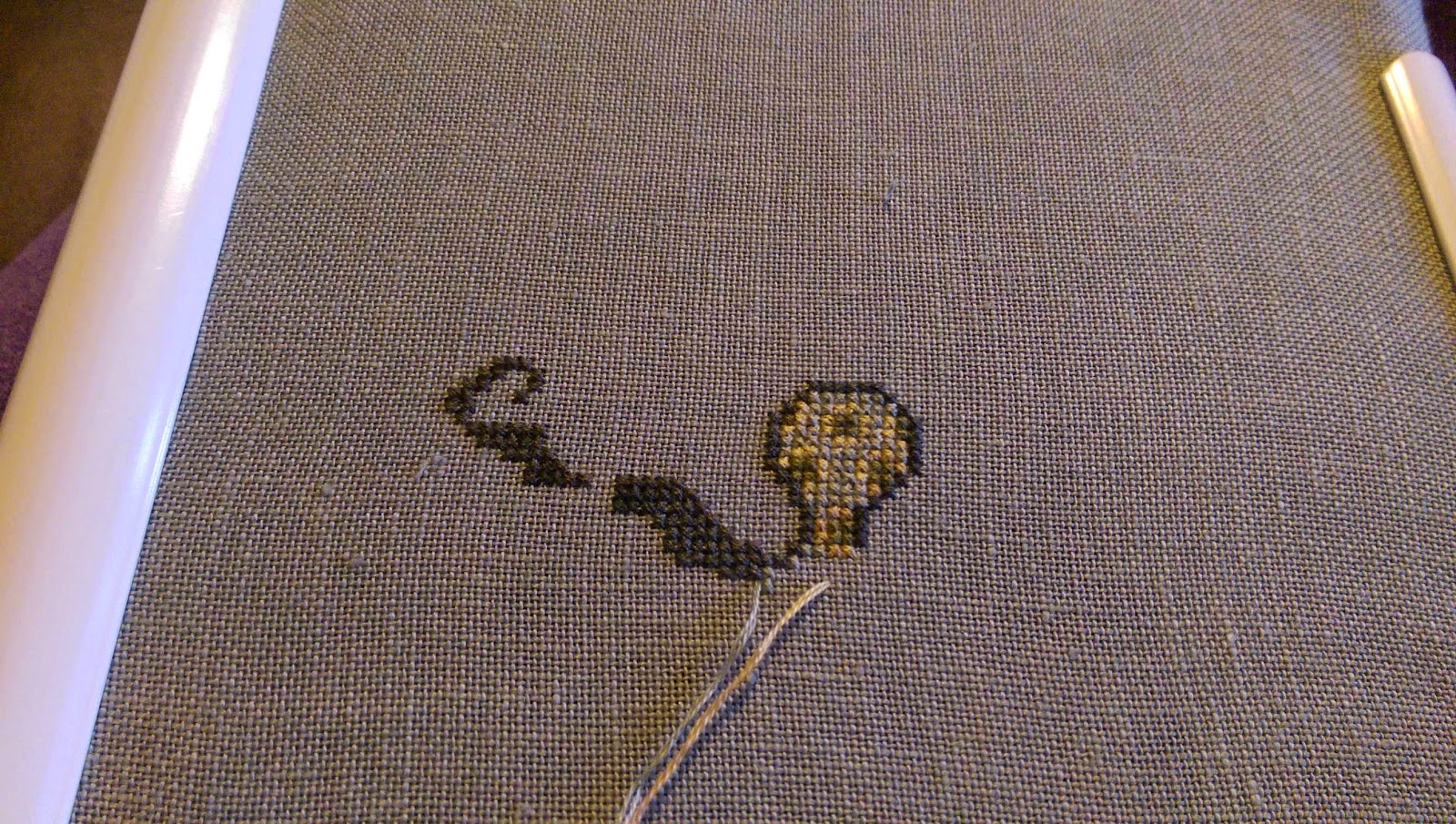 The first one, I incorrectly labeled as "a partridge."  It's actually a Quail.  Ironically, I think my husband and I spotted a few quail on the road the other day.  This one is from A Cross Stitch Christmas A Heartwarming Christmas that came out last fall.  The blank spots are where some Mill Hill beads are going to go. 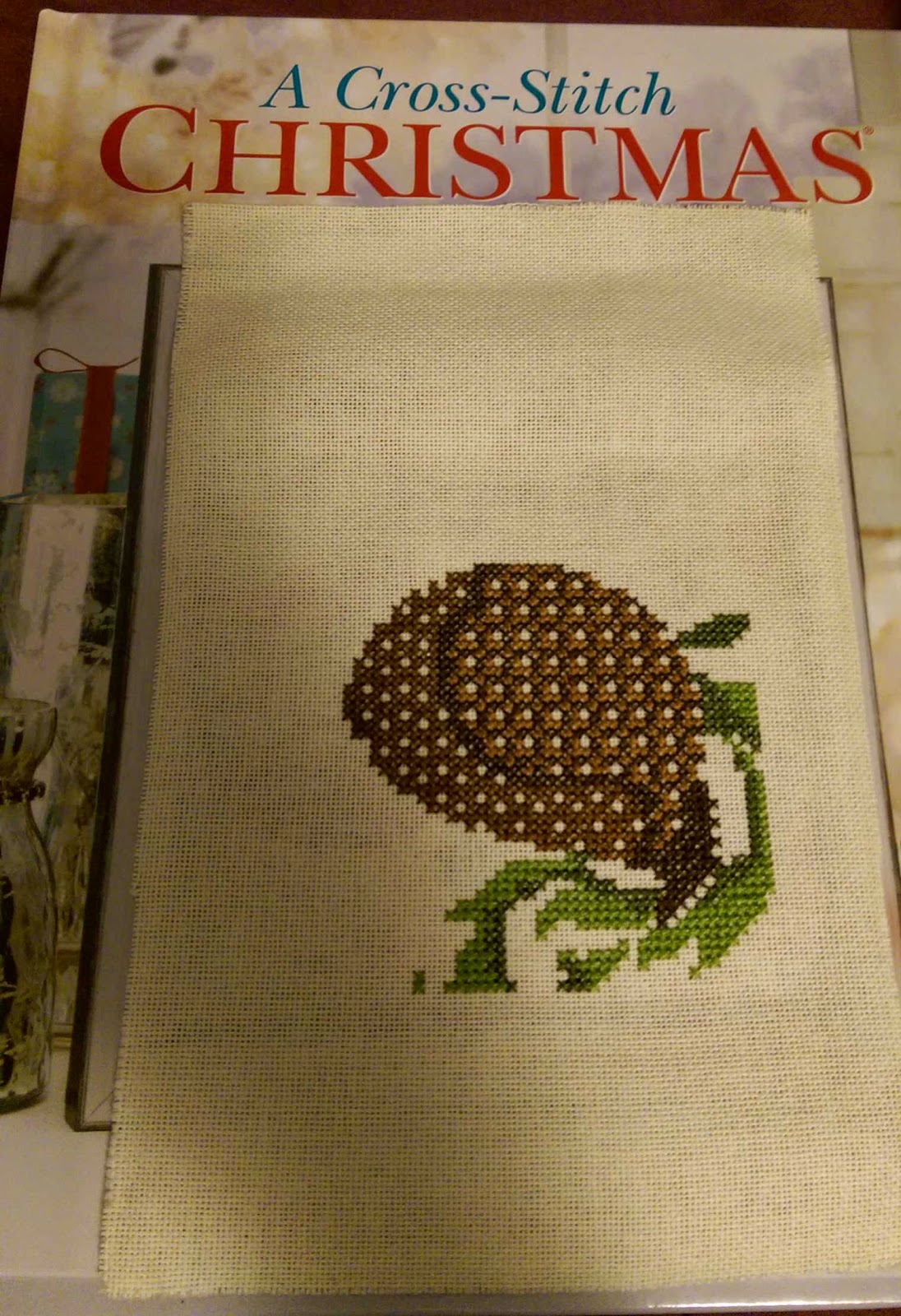 The second ornament is off my JCS DVD, from the JCS 2009 Ornament issue called "Candy Cane Horse." 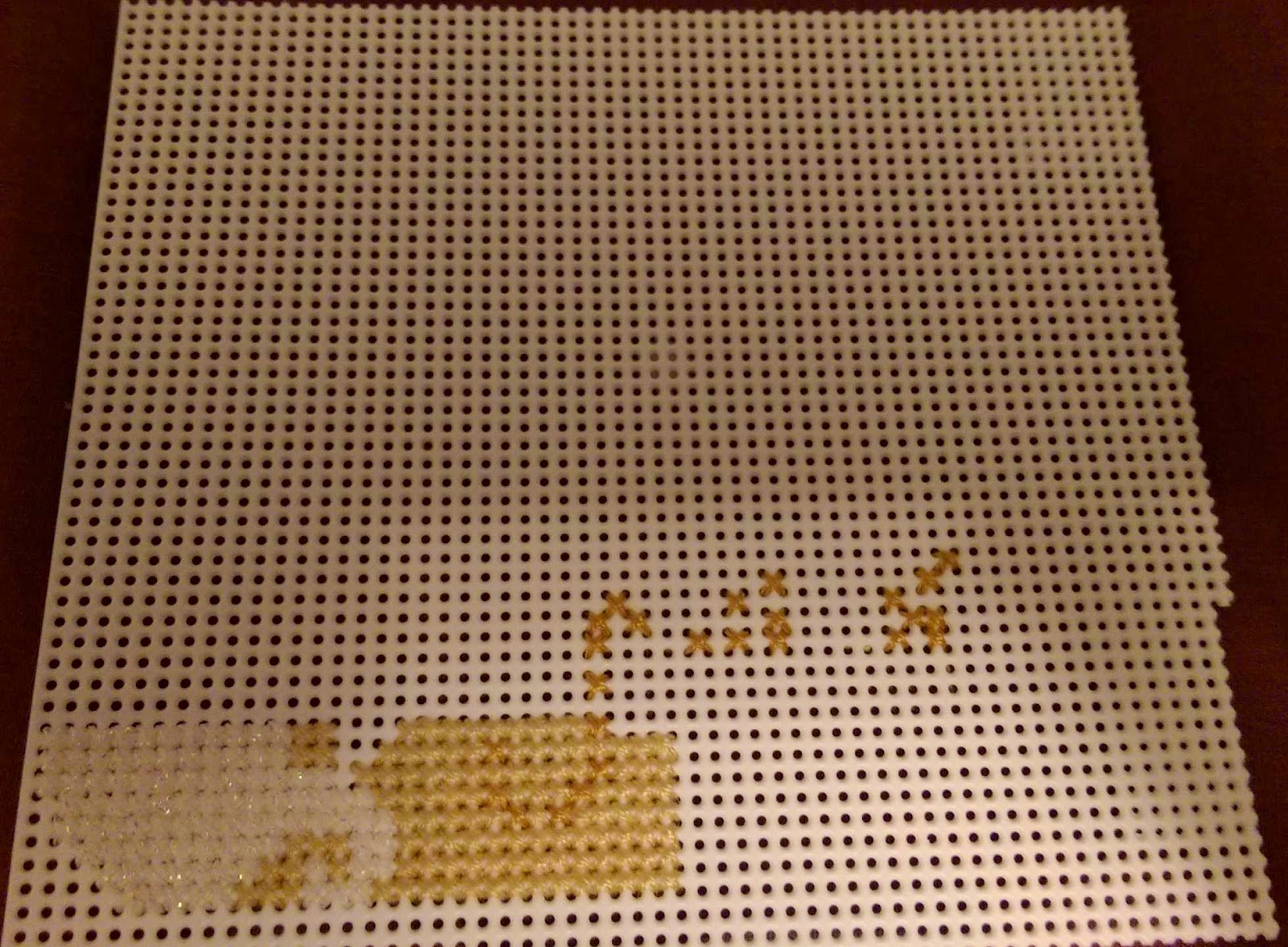 After four years of living at this house, I decided it was time to try to plant a garden.  It's a rental, so I kept it small so it is easy covered back up with grass seed.  Our back yard is pretty weedy (and has been since we moved in - there wasn't much growing back there when we first moved in either) so I don't feel back about digging up part of it.  The whole yard should be hit with round up and re seeded anyway.

We picked up a few plants and some seeds.  I discovered something called "square food gardening" while researching how to best plant what I had bought.  I thought it might work for what I planned. 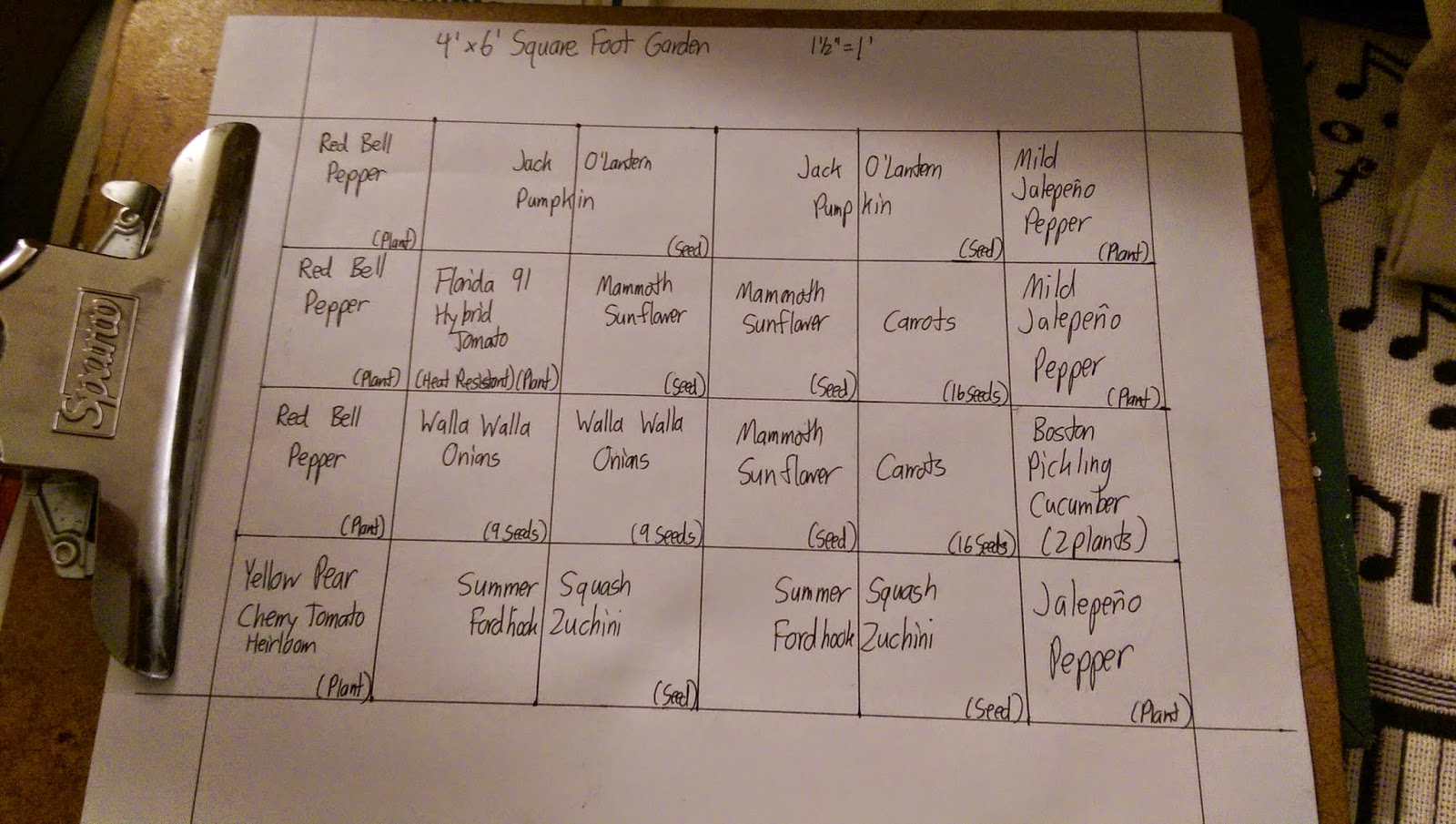 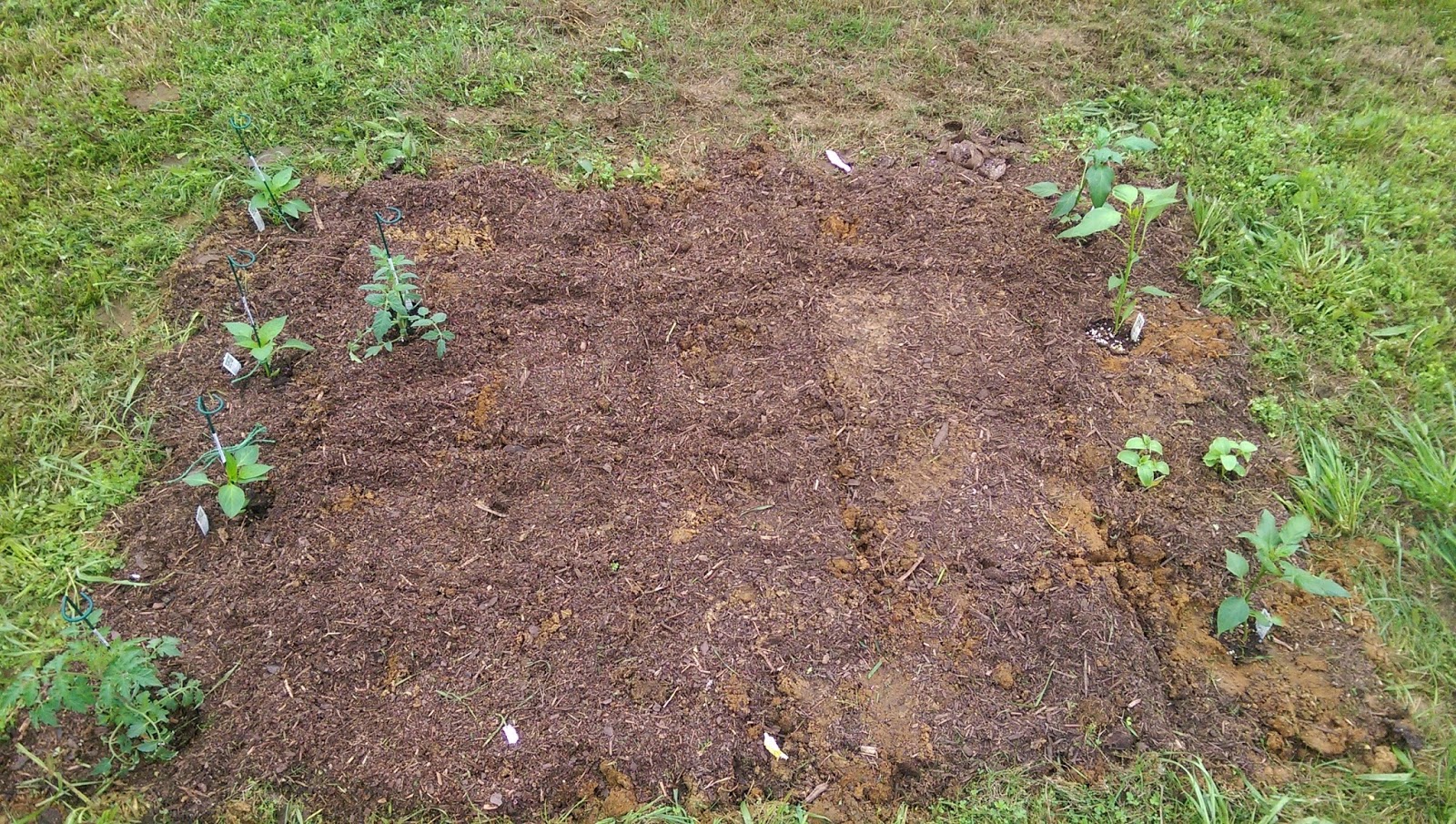 It's a small garden: only four feet by six feet.  It was hard work to dig it up even though it's so small.  The top picture if my plan for where to plant everything.  The bottom is an actual picture.  I made sure to get it done on Thursday to take advantage of the rain we had Friday and Saturday.

It's a bit of a "sampler garden."  I haven't gardened since I lived at home in Wisconsin so I have no idea what will grow here.  My in-laws tell me that the peppers are a good choice.  I planted it in full view of our living room window so the girls can watch it grow.  Everything I picked is "full sun" which is good because there's no shade back there!  It's only 24 square feet so watering won't break my budget either. 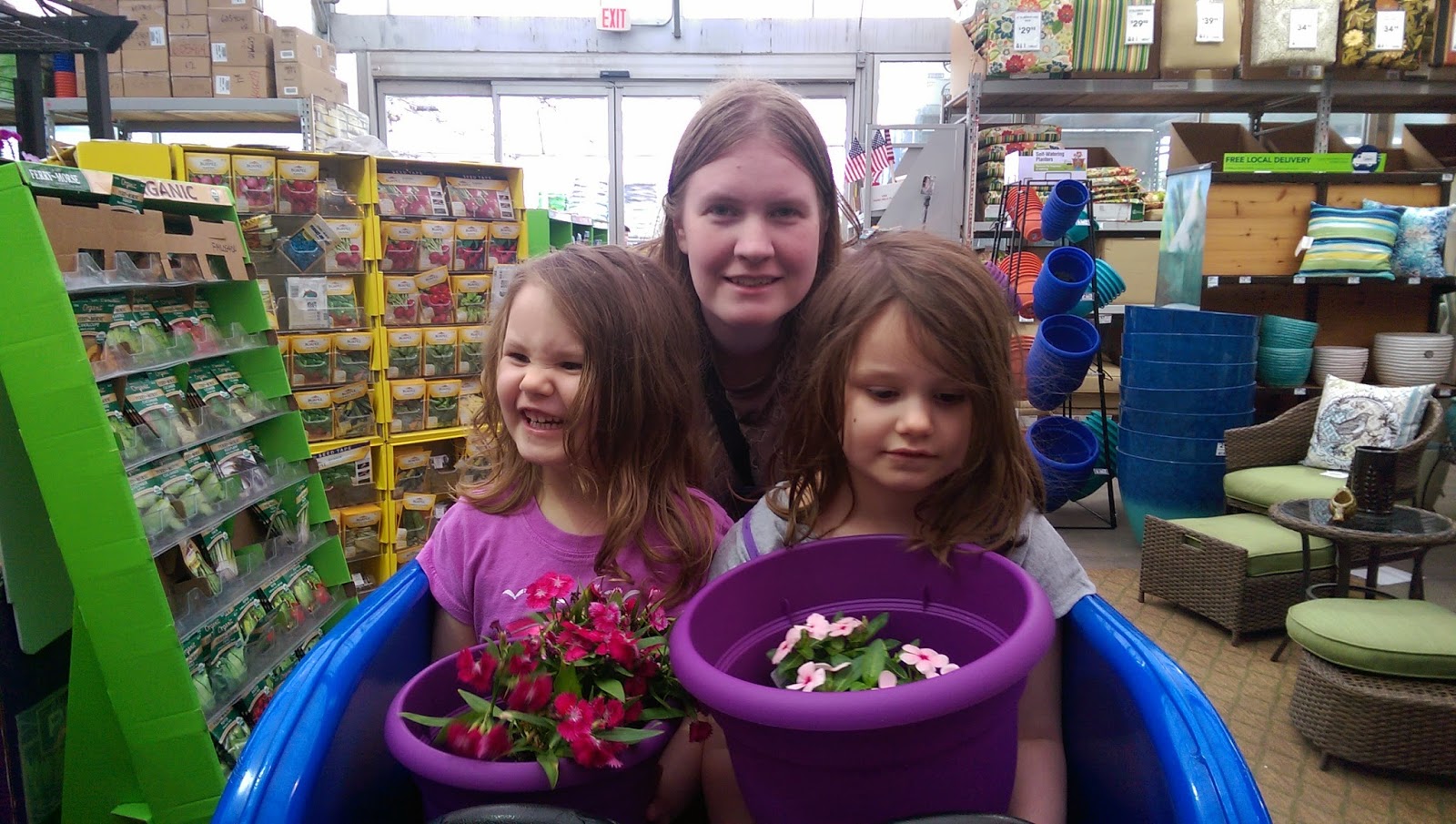 The girls wanted their own "fowers."  We planted them in their own pots in the front.  I also put some marigold seeds in a big pot.

In stitching news, I started two ornaments.  There's not much to see yet.

I know I just posted my latest progress but I made such good progress today that I had to share!  All that is left is to fill in the chest with 415 and then pussywillow work (which will take awhile because of the Whisper thread).  I think I may put it aside and do an ornament quickie.  My goal is to get caught up on ornaments this year!  I'm so close!

Since I finished the page of "Do Not Meddle," I decided to try for the last big page on Fuji.  I've been making slow progress this week.  For some reason, the webbing between my middle and ring fingers on my right had has been hurting.  I have no idea why but it's very annoying and rather painful.  Here's a picture. 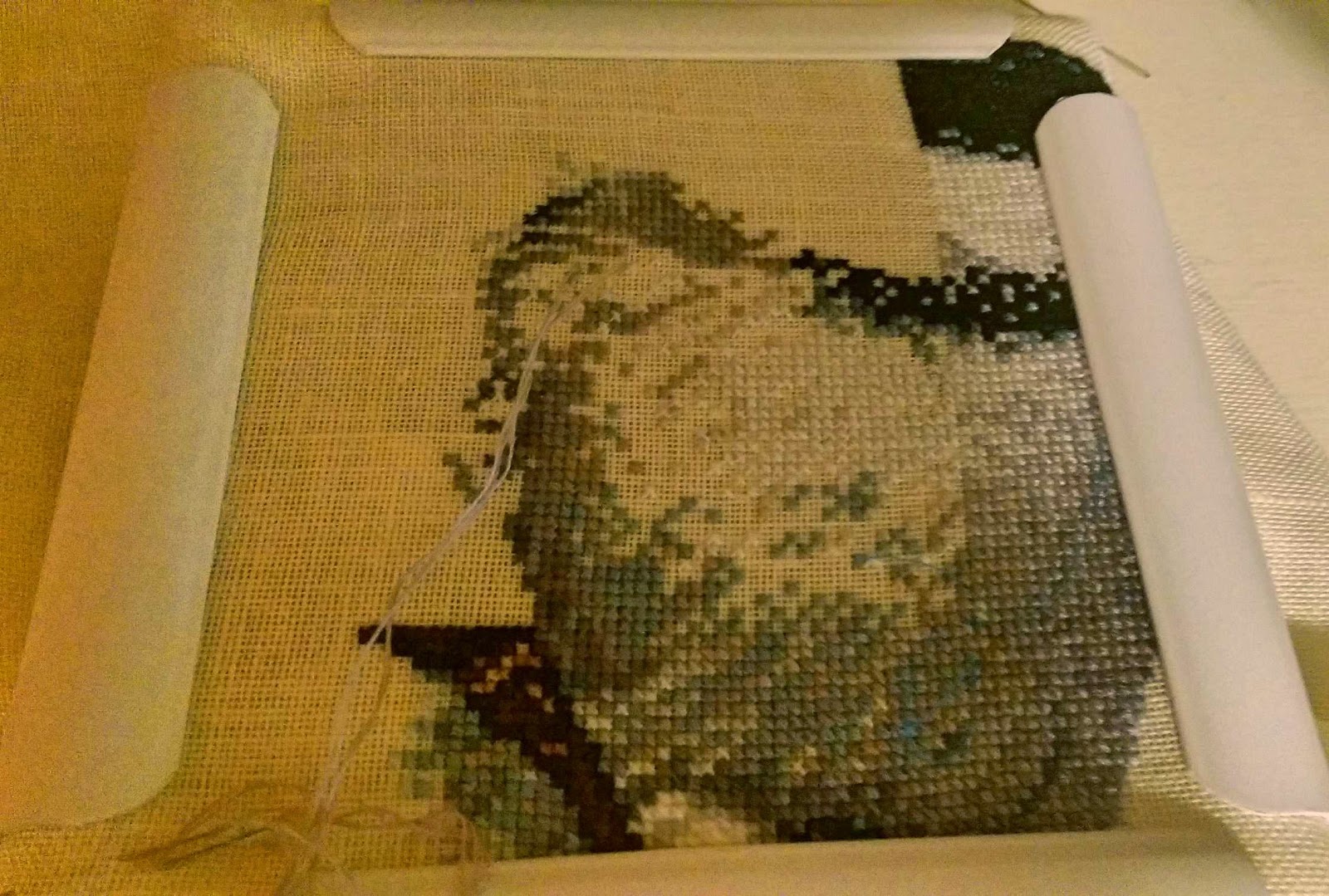 At least, this piece feels like there's fifty shades of green.  It's actually 6 shades.  I am happy to report that I finally finished the wing page.  There are two pages left but there's not much on each page.  It earns me $8 for SFS.