Worked on a couple of things today.  I've been wanting to do this owl from the JCS 2011 Halloween issue.  It calls for 32 count raw Belfast linen which I don't have and would have to order online.  I was looking for a substitute and realized that I have linen that color in 28 count.  It's so small that the change in count only adds 1/3" to the piece.  And the floss is DMC.  So I went for it. 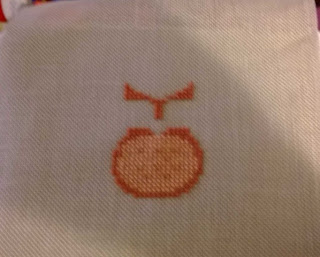 I had to put fray check on it because linen frays like crazy so while I waited for it to dry, I worked a square of my HAED.  It hasn't seen the light of day in awhile. 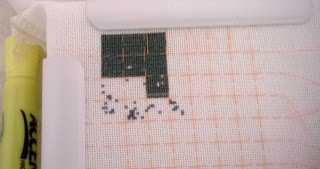 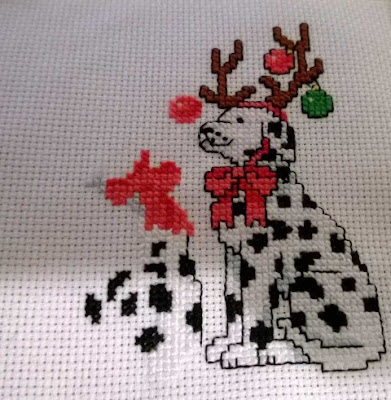 I think I'll pick up a different WIP this weekend.
Posted by Joy at 1:52 PM 1 comment:

I'm now about half way done with my Marsh Marigolds.  I think I'll be switching to a different project for awhile and pick up one of my UFOs.  Not sure which one yet. 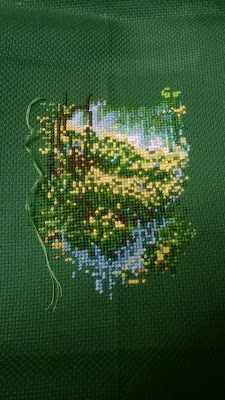 Monday was my first day of classes.  I am taking 10 credits (3-3 credit courses and 1-1 credit course).  Not sure how I'm going to manage the 30 hours of field observation I have to do.

Tuesday was the children's first day of school.  Here's the gallant preschooler.  Her bus comes for her at 6:40. 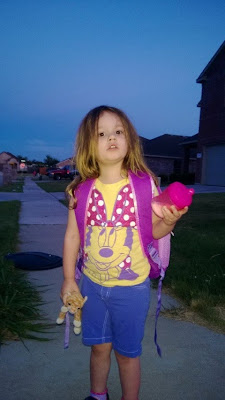 The river is showing a bit more on the bottom. 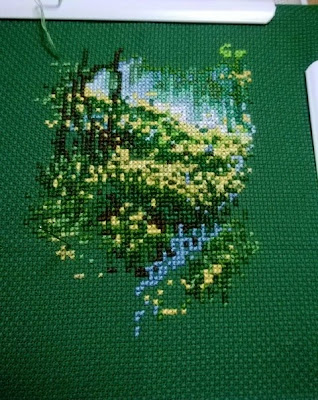 Today, I received some horrible news.  My friend Josh died.  Today would have been his 28th birthday.

Josh was one of the first friends I made when I went to college.  At the time his girlfriend was still living in Michigan while we were in Minnesota.  There wasn't a lot of stuff to do in the middle of nowhere so we played Dungeons and Dragons and participated in our college's Renaissance Faire.  I remember him excitedly showing me the engagement ring he had bought for his girlfriend.  I think I might have been the first non-family member to see it.  We would chat about lots of things.  He was like the brother I never had.

His girlfriend turned fiancee moved to our small town to be closer to him.  We became friends as well.  They got married soon after and I was at their house almost every weekend.  They were there for me when my father died and when I had problems related to that.  I stayed with them while I student taught. We had a lot of fun together.

I kept in contact with them over Facebook when I moved to Texas.  Their daughter is only a few months younger than my oldest.

The saddest part is that he took his own life.

I am still in shock right now. I won't be able to make it up for the funeral. His life is in God's hands now.  I am deeply saddened for the wife and daughter he left behind.

"Surely he hath bourne our griefs and carried our sorrows."
Posted by Joy at 11:13 PM 4 comments:

It's kinda starting to look marshy. 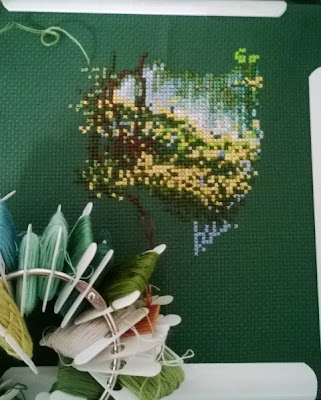 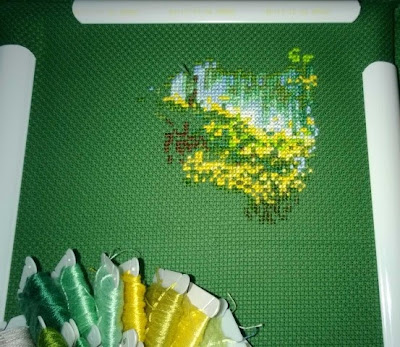 The word of today is "confetti."

I started a new project using the lovely green Aida I got for 75 cents at SCRAP.  It's going to look like this:

It's called "Marsh Marigolds on Logan's Creek" out of a 1989 Cross Stitch and Country Crafts mag.  The designer paints, so this is based off one of her paintings.

The confetti is almost worse than Snow White Discovers the Cottage (which is based off a Kinkade painting). On small pieces, I normally don't mark the stitches but the colors run so close together that I had to break down and make a working copy. 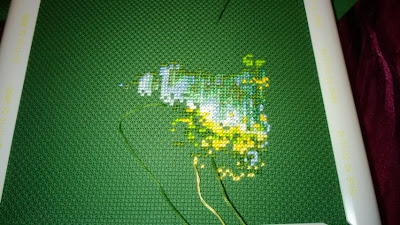 I was able to frame "Violets are Blue" today.  I got the frame at Goodwill this weekend for like $1.50.  I think it turned out nice.  It's going to be in my "seasonal" collection that rotates as the seasons change. 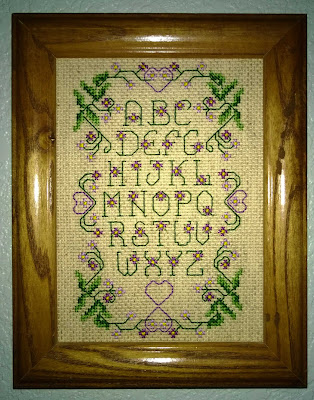 I finished stitching on the heart today.  It still needs to be finished on the tin.

Today, I had to take my mom back to the train station in Dallas.  We left the girls with Em this morning and headed to the George W Bush Presidential Library in Dallas on the Southern Methodist University (SMU) campus.  It just opened in May.  It's not a library in the strictest sense but it is the archive of all the presidential papers and also has a museum.  All the recent presidents have one.  Texas has 3 total (the most of any state): George W Bush at SMU, George H.W. Bush at Texas A&M and LBJ at UT-Austin.

It was a great place.  Lots of videos.  There was a replica of the oval office and a memorial for 9/11.  There is also a wonderful restaurant attached to it where we had lunch.

Here are some pictures: 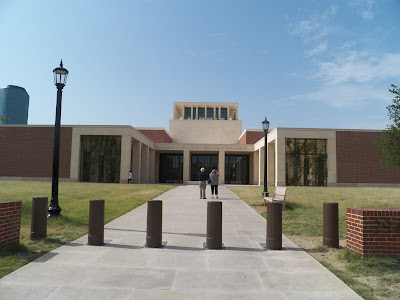 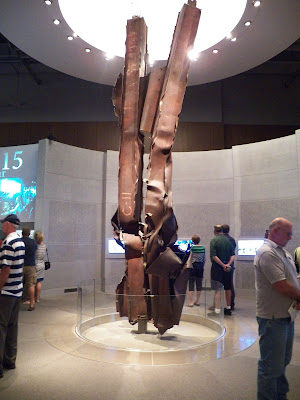 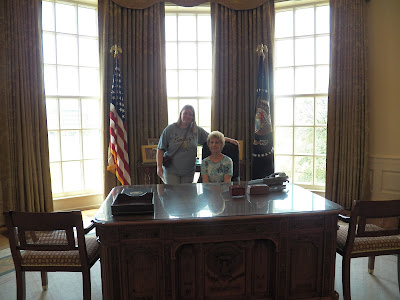 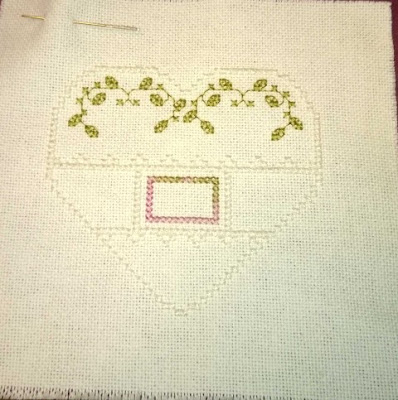 We've been having fun going around with Grandma but the weather decided to go above 100 this week so it's limited what we can do.  We tried the zoo on Monday but we were sweltering after an hour in the sun.  Today we went to Cabela's to see the stuffed animals and the fish.  The girls liked the fish a lot.

We did a bit of shopping.  On Tuesday, we hit SCRAP.  I found some fabric I needed.

The Monaco will be used to make this:

The Aida will be used to make this:

Today, I went to Jo-Ann to get some stuff.  Sadly, they did not have the JCS Halloween issue.  I saw Parsley had got it and I wanted to see what was in it.

I needed another thread box.  I got some larger pins to use when framing and I got some thread to match the poor kangaroo on the far right that is missing an ear.

I also started this: 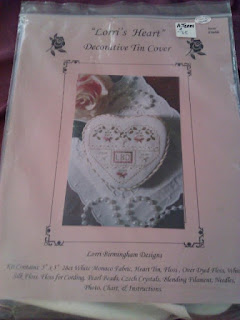 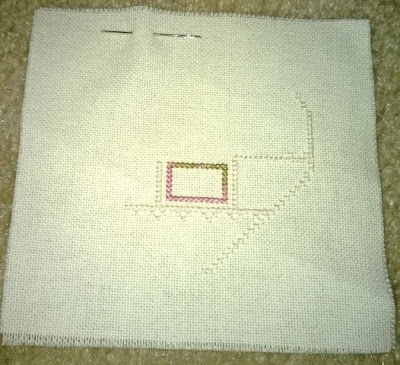 Totally rushed to finish this today.  But my husband is working very late and so I doubt I'll be able to run to the thrift store in hopes of finding a nice cheap 5"x7" frame to put it in.  I think it turned out nice. 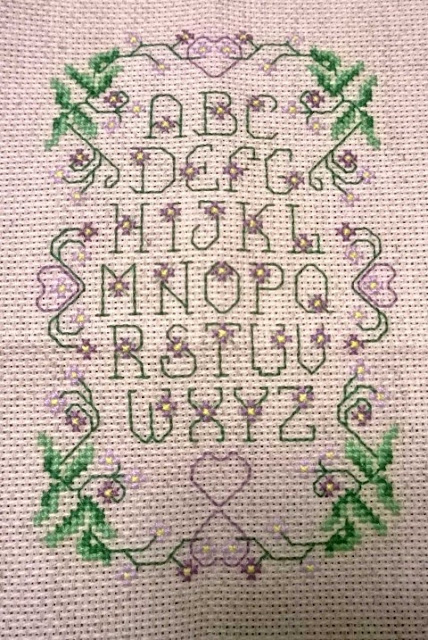 I decided to put the dog ornament down today.  I'm stitching it on 18 ct and a lot of it is white on white so it's a little tedious.

I have a bunch of smaller pieces that I consider "seasonal pieces" that I can switch based on the season or holiday.  Most of the pieces are for fall so I decided to stitch this one pattern that I knew I had the fabric and threads for in my stash.

It's called "Violets are Blue."  It's from Cross Stitch! magazine from the 1990s (out of the stash of mags I got from my cousin Amy).  There's not much to it so I was able to get the majority of it stitched today.  It's just as well since I have to spend most of tomorrow cleaning because my mother arrives for a visit on Saturday. 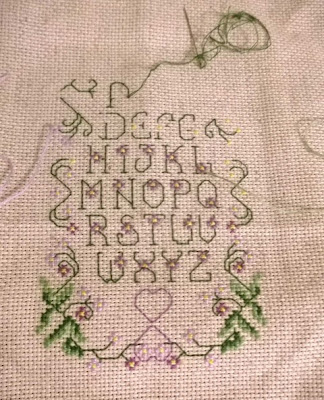 It's being stitched on 14 ct. Banjo Cloth. It's hard to see in the picture but there are some light purple flowers in the mix too.  I hope to have a better picture when it's finished.  I have one more row of letters and the top embellishment left.

Expect blogging to be slow this next week but I hope to be able to post some great pictures of the girls and grandma.
Posted by Joy at 12:29 AM 1 comment: