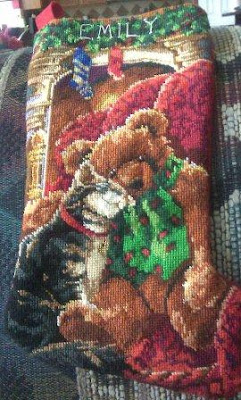 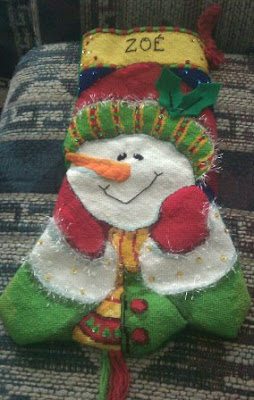 Zoe's still needs the two pompoms to be glued on and the rest of the fringe but that's just minor details.

I also finished my pumpkin piece that I'm doing for Becky's contest.  Only problem....large crease in the middle and my iron is MIA.  Eeek.  New iron not in budget at the moment either.  Any suggestions? 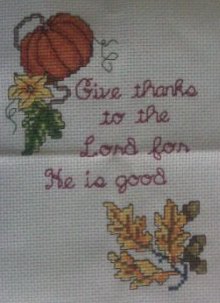 I have that wonderful Snow White Thomas Kinkade waiting but I'm not sure I want to delve into something that large at this point.  I have a bunch of kits I could do but then I have to separate the floss again and I used up my floss cards on the Kinkade piece.

And Parsley....haven't forgotten.  Still owe you a PIF.  I have a couple of ideas but still nothing has jumped out that screams "Parsley."

Which brings me to the dilemma.  I decided that each year I'm going to stitch my children (Zoe and yet-to-be-named-who-won't-cooperate-and-show-Mommy-what-she's-having) an ornament.  This will actually be Zoe's second Christmas so I owe her two ornaments (not going to start them now most likely as she won't understand it right now).  I have this year's picked out.  It's a stick horse ornament.  The problem is the "Baby's First Christmas."  I have not seen a "Baby's First Christmas" pattern in any of my magazines (and I have 4 4" D ring binders of them too).  So, I have this really cute pattern for a mouse sleeping in a bed that I was thinking of doing and adding baby's first Christmas but I'm am looking for suggestions.  Don't really want to go out an buy a pattern, just looking for a nice motif you think would work well.
Posted by Joy at 2:34 PM

I love to hear from my followers! Let me know what you have to say.

I've been having a lot of spam lately so Anonymous users are not allowed. Sorry. :(