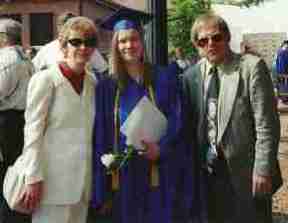 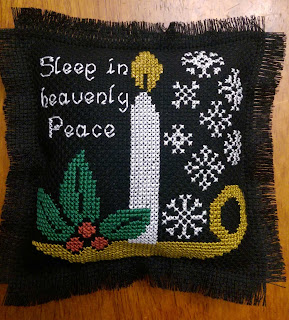 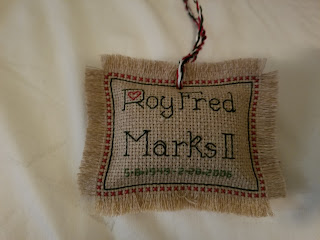 Now, 12 years after his passing, he is finally a part of my Christmas tree.  And that's the story behind the string
Posted by Joy at 5:05 PM 5 comments:

Some Ornament Stitching and Reading

I decided to stitch some ornaments over break.  All are from the 2018 JCS Ornament issue

First up was one for the ornament box for Adèle.

Next was a bird one.


Last was a Joy ornament because I couldn't resist.

Obviously, they all still need finishing.  I also want to do a memorial ornament for my Dad.  I may also do a few ornaments for the grandkids.

While I stitched, I listened to some Audible.  I may be Audicted.  I like that I can read while doing other things.

I finished Oathbringer by Brandon Sanderson.  I've been listening to the series this fall.  This installment was 55 hours long, so it took awhile.  I can't wait until the next book, but there is not a release date yet.

Oathbringer by Brandon Sanderson
My rating: 5 of 5 stars

55 hours later, I have finished this book, wishing there was a release date for the next book.

The king and Dahlinar have hatched a daring plan to take back their city. A team of soldiers and Radiants travel to the city to open the Oathgate. However, conditions in the city are horrible and executing the plan will be extremely difficult.

Meanwhile, Dahlinar is working on forging alliances with the other kingdoms. It is not an easy task as his reputation as a general causes the others to fear it is a ploy to take over their lands.

Everything leads up to a desperate battle for survival at the end of the book.

View all my reviews

Currently, I am listening to Radium Girls, a non-fiction about the dial painters in the 1920s who sustained Radium poisoning and died awful deaths.

Catching Up Part 2: Some Ornaments

When I got laid off back in 2012, I started making ornaments for my daughters for each year.  There's more info on the Ornament Box Project page.  I updated my albums with the most recent ones. 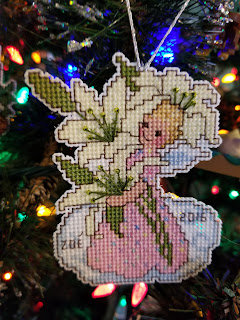 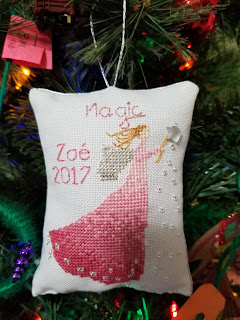 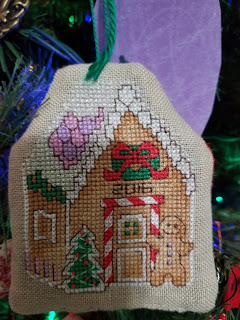 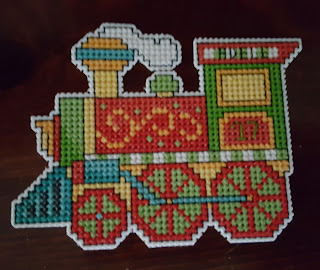 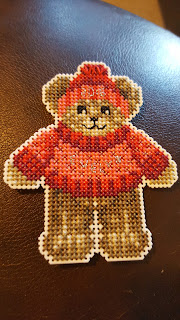 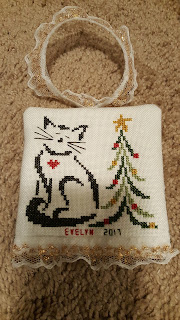 I've made some more as well not related to that project. 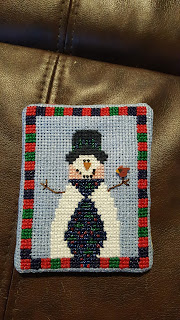 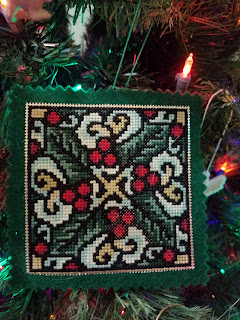 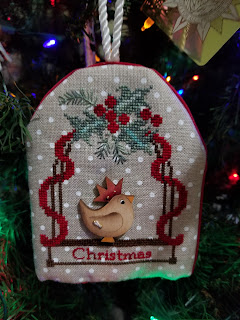 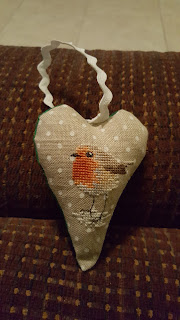 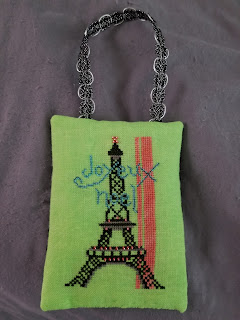 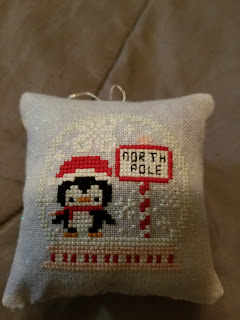 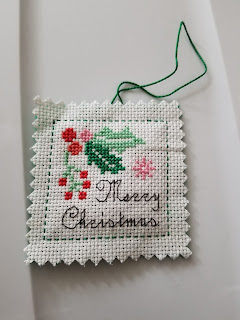 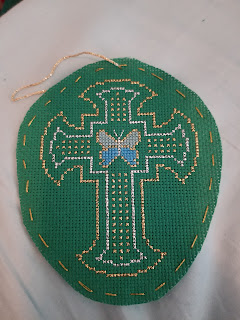 My finishing is not nearly as good as Carol's.  (Check out the Stitch Stitching Dreams blog).  I have improved with time.  It maybe it's just desperation. :)
Posted by Joy at 4:15 PM 2 comments:

Catching Up Part 1: The Largest Piece Ever!

When I was subbing, I ran across a teacher who was cross stitching an Afghan.  She had crocheted the blanket and was cross stitching on it but she had made a mistake.  So like many of us, she put it aside (because sometimes you have no time for frogging!).

She gave it to me and asked to see what I could do.  I found the mistake, frogged what needed to be frogged and set to work.  It took about 2 months of work.  We were in the process of packing to move so that cut into stitching time obviously.

This is the result:


It was an awesome opportunity.  First, to help her out.  Second, to do something new.
Posted by Joy at 10:35 PM No comments:

I have been away for awhile.  I've still been posting my work on Instagram.

A lot has happened.  We bought a house at the end of 2016.  I took a long term substitute job in 2017 which turned into a paraprofessional job.  This fall, I got hired for my first ever teaching job!  I now teach 8th grade math.

This has drastically cut into my stitching time.

So, I'm going to do a few catch up posts of some of the work that I have done.  Stay tuned!
Posted by Joy at 7:24 PM No comments:

I picked up my cross stitch from the fair today.  And here's what I got.... 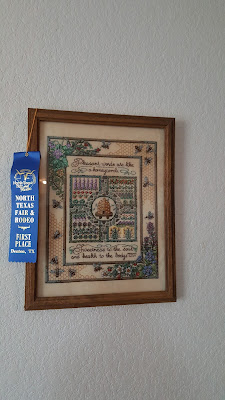 I was shooting for "grand champion" this year but apparently there weren't enough entries so blue was the highest ribbon.


I finished this piece awhile back but the frame I had bought would not let me drive nails into it.  So long story short, I hot glued the backing on and it fell off the wall.  I was able to repair it and used command strips to put it on the wall this time.  It's nice to have it hanging back on my wall! 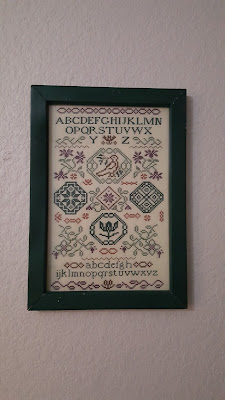 I was a bit naughty and picked this up at Build a Bear.....  I had a coupon for $10 off so I added the sound effect.  It was buy one get one so I got Luna the My Little Pony too. 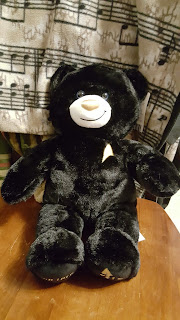 I also finally finished this great piece "Trimming the Tree" from Nancy at Victorian Motto Sampler Shoppe.  It turned out great with the bells and fusible fleece. 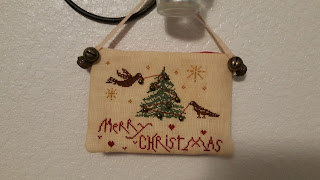 In not so great news, I discovered at the beginning of the month that my oldest had head lice.  Eeew!  My youngest also had it, I had some and so did the stepdaughter.  Everyone but my husband!  Fortunately, I think we've killed them all.

My suggestions for dealing with lice!

I've been off the blogsphere quite a bit this year.  Sorry.  But here's a run down of what I've been up to recently.

I'm still seeking a full time teaching job.  I've had one interview so far and my local district has several positions open so I'm hoping to get one.  If not, I'll be subbing.  I also have been grading standardized tests and found out I'll be scoring leader for the next session.

My girls will both be full-time in school next year!  Finally!  My six year old passed Kindergarten reading on grade level!  That is incredible since she really didn't start talking at all until age 4 and didn't say a sentence until age 5.  We are also expecting another grandchild (a boy) so that's more ornaments to stitch.

My daughters are into Tsum Tsum (these adorable little Disney plushes).


We also have some Build a Bear Ponies which have recently joined us. 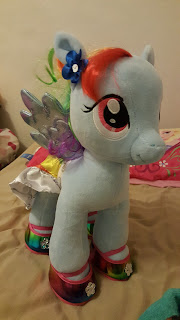 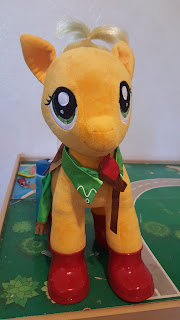 I have had a few small finishes, but I am mainly working on Gathering Honey which I plan to enter into the fair in August.

My husband, who totally understand me, let me get stash at the LNS for Mother's Day.  I picked up an 11x11 QSnap and a needle keeper (which I love) as well as the fixings for the bird ornament out of last year's JCS Ornament issue, some Kreinik and silk for another WIP and the GA Chalk for the Winter Chalkboard. 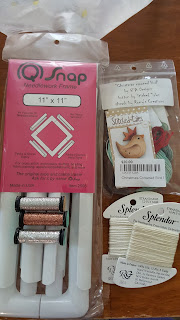 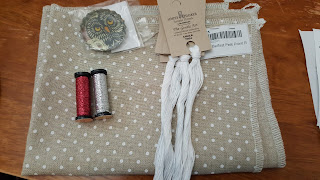